Going for Green or Growth? 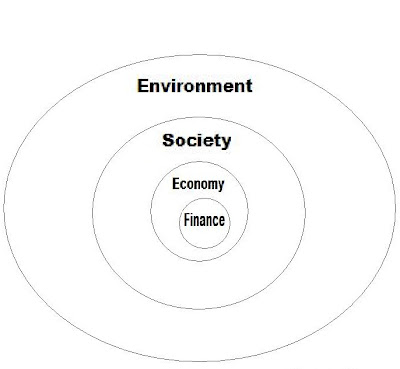 Societies and their economies clearly exist within and dependent upon the natural environment, drawing resources such as oil and natural gas from it and emitting wastes such as carbon dioxide to it. Sustainability therefore is a matter of the environment and society and the economy. It is necessary, desirable and in the end inevitable for us to achieve sustainability because human health, well-being and quality of life would be greatly improved and the stability and security of our world would be enabled. Tackling poverty for instance is as much an environmental as it is a social and economic issue. Why then do most politicians, economists, businesses and many others talk and act as if the environment is something to attend to only when the economy allows it? Why are economic and social issues still not seen as interdependent with environmental issues, requiring an integrated, coordinated approach? Or is this fact known but simply not acted on because of power relationships?  Has the UK Chancellor of the Exchequer George Osbourne, whose recent budget demonstrated a near complete disinterest in the green economy, really not noticed the economic success coming from it despite the generally dire economic situation and lack of support from the Government?

Oil and gas supplies are finite, running down, high and/or unstable in price and when used cause climate change (amongst other problems such as oil spills!). Yet GDP and GNP growth - which take no account whatsoever of the depletion of resources or the build up of climate changing gases – are the main measure of economic progress! The pursuit of GDP growth as the key goal of governments - equating growth with progress - has been and is a part of the problem. GDP growth based on non-renewable resources is one of the reasons that Chancellor George Osbourne's budget promised to deliver shale gas and oil industry tax breaks to promote early investment in shale gas in his recent budget. He wants a shale gas boom and presumably is not bothered that reliance on gas is unsustainable, not least because it will make hitting our climate change targets impossible.

Seeking GDP growth in the way we have been is reducing our capacity to live without undermining the systems that support our lives by:

·        not switching resource use from finite, non-renewable types such as oil and gas to renewable types such as wind, biomass, hydroelectric, tidal, solar, wave and geothermal on anything like a sufficient scale or at a sufficient rate
·        decreasing the overall natural assets stock, such as through consuming resources like forests, soil and fish, that in principle are renewable, at a faster rate than they are replenished
·        damaging the regenerative capacity of ecosystems and their ability to supply goods and services, such as through soil erosion and desertification
·        emitting wastes and pollutants at levels beyond environmental capacity to safely process them, such as through the rapid emission of climate changing carbon dioxide
·        causing high levels of inequality by not trading fairly or sharing wealth or empowering people and communities within societies and across the world
·        leaving generations to come with a build up of risks and costs such through planning to expand nuclear power generation, leaving toxic and radioactive wastes for future generations to try to cope with for thousands of years
·        consistently undervaluing both humans and non-human species, through displacing local people, clearing the forest that sustained them and using the land to grow crops to make biodiesel instead of feeding people
·        not being efficiency focussed, given that over a third of the food produced is wasted and dumped and we use heating and electricity like there is no tomorrow
. 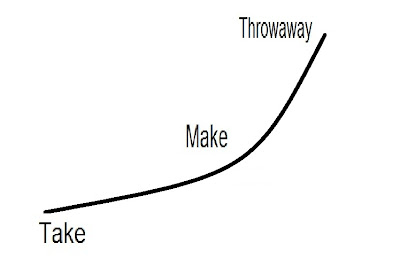 To become sustainable we need to achieve a set of economic and social goals not centred primarily on GDP growth. Growth in the economy needs to meet conditions and be selective, to be of the right sort, in the right places, so that we attain and maintain economic stability and security – and sustainability. Aside from announcements on extra incentives for ultra-low emission vehicles, a pledge of support for the next stage of two new projects for carbon dioxide capture and storage from power stations and indicating that the government would come forward with a plan for zero-carbon homes (that won't actually be zero carbon) by May, Chancellor George Osbourne chose in his budget not to begin building an economy we can sustain into the 21st century and the next however. He pretty much assumes that what we have done in the past is good enough for the future. Instead of setting a clear regulatory framework to drive investment and export opportunities for low carbon technologies the Chancellor exempted some energy-intensive firms from the Climate Change Levy designed to incentivise energy efficiency for instance. 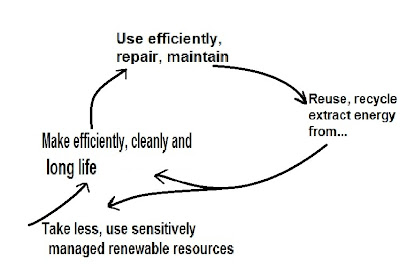 We need to broaden our idea of progress and success, adopting prosperity instead of GDP growth because it encompasses general flourishing, thriving, general wellbeing, happiness and health as well as economic factors - socio-economic goals should not continue to be geared to more and more money for a few. Efficiency needs to replace waste. Home insulation is very labour-intensive and thus a great job creator and insulating existing housing stock should be one of our highest energy priorities because it rapidly cuts bills, fuel use and pollution and adds to comfort levels. Yet people using the Government's Green Deal to insulate their homes have to borrow at a whapping 7% interest rate!

Renewability needs to replace resource squandering yet the budget made no mention at all of renewable energy. We must not continue to exceed environmental capacities yet Chancellor George Osbourne has not encouraged our transport system to move away from its oil dependency and has instead withheld the fuel duty escalator rises and boasted about the amount govt is spending on new roads. This generation and those to come, the world over, deserve to get their dues but the Chancellor's focus is backward or static, not forward. Yet without an integrated and coordinated approach to social, economic and environmental issues we won't have dynamically stable, secure ways of living that are able to persist over time.