Understanding the preferred tastes and desires of the particular demographic that contemporary urban placemakers most seek to attract—the Millennials—is one of the planning profession's major preoccupations.  One of the advantages of teaching urban studies to a college audience is that it allows one to take something of the pulse of what Millennials want in urban settings. This is best done by putting students in the field to study real urban environments. Denver is terrific for that. But some online game playing can also be useful as a warm-up.

The game in question is the  BMW Guggenheim Lab's Urbanology game. The game seeks to teach players something about urban sustainability by asking them to give "yes" or "no" answers to a series of urban policy questions. It then produces some quick-and-dirty findings about the governing values implied by the answers, and identifies a real city that best matches those values.  The eight values at issue are Affordability, Health, Innovation, Lifestyle, Livability, Sustainability, Transportation, and Wealth. Questions include items such as "Will you double the cost of public transport to fund its conversion to a carbon-neutral system?" or "Will you pay for a free bike service in your city"?  Working with such yes/no dichotomies is not ideal, but it's also not unreasonable as a starting point for conversation.

I've assigned the Urbanology game to the 25 or so students who typically enroll in my Culture and The City course every fall term. I ask students to play the game at least 10 times and report any patterns in the results. The game changes a bit from year to year as players suggest new questions for the 10 question mix that's randomly generated for each run of the game.  I like to think that new input from  players in different places worldwide improves the game by making the question mix increasingly sensitive to a player's real values and preferences.  This could be too much to ask of an online game like Urbanology, but one can hope. What follows is what I've learned over the last three years of game-playing.

The top value for my Fall 2011 class of Millennials was Livability (investments in security, recreation, and individual comforts), which received 38% of the mentions by students (see Table 1 for the value comparison data for all three years of game playing). Health (investments in general physical well-being) came in second with 26% of the mentions.  Sustainability (investments in greening the city) was the third most frequently mentioned value, at 22%.  These values translated into a list of city preferences that had Berlin at the top of the heap with 30% of the mentions, followed by Toronto with 27% and Shanghai with 26% (see Table 2 for the city comparison data).  These results dovetail with what many observers have suggested are clear Millennial preferences for walkable, mixed use, and transit-oriented cities.  Indeed, Paul Krugman makes the case for Berlin as a desirable model for America's urban future in a 2008 New York Times column that's part of my course reading list.  Toronto is also a reasonable preference for anthropology students given its reputation as one of the more successfully intercultural cities on the planet.  On the other hand, Shanghai is a bit of puzzler only because I (and my students) don't know much about it. 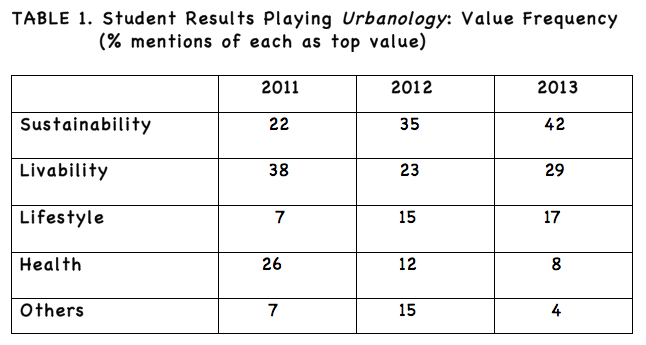 Game-playing by my 2012 class of Millennials generated the same three cities, but in a slightly different order.  Berlin got 31% of the mentions, followed by Shanghai at 27% and Toronto at 23%. Interestingly, the urban values generating the 2012 city list were decidedly different from 2011.  In 2012 Sustainability received 35% of top value mentions,  followed by Livability at 23% and Lifestyle (investments in leisure activities including art, sport, tourism, and culture) at 15%.  Health dropped off to 12% of the mentions. In the most recent run of the game this fall Sustainability continued its upward trajectory as the most frequently identified student value, with 42% of the mentions.  Lifestyle is also trending upward, with 17% of the mentions.  Livability rebounded with an increase after dropping the previous year.  Health continues to decline as a reflected value.  One student asked a very good question about the difference between Livability and Lifestyle.  After a short discussion the class decided that it makes sense to talk about Lifestyle as implying an urban amenities focus and Livability as an urban rights focus, such as the right to public space.   Interestingly, the 2013 exercise produced a clearer separation among cities.  Berlin continued its rise to  33% of the mentions, with Toronto and Shanghai leveling off at  25% each.

For reasons discussed in previous posts on this subject (here and here), results of the Urbanology game can leave you scratching your head.  They raise suspicions that the game is "rigged" in a way that guarantees certain results. Yet at the same time the addition of new questions seems to be producing results that make more sense with each passing year.  The increasing student interest in Sustainability certainly parallels the spreading sustainability discourse on my campus.  The results of my own game-playing are certainly making more sense (see tables 3 and 4).   In 2011 and 2012 Sustainability and Lifestyle were neck and neck as my top values, followed by Livability as a distant third.  Mysteriously (for me) these runs produced Shanghai as my top city  followed by Berlin and Toronto in a tie for second place. The 2013 results  brought a huge change: Livability is my going-away favorite with 40% of the top value mentions, with Berlin appearing as my top city 50% of the time I played the game. Given my values Berlin makes much more intuitive sense to me than Shanghai, and Livability certainly tracks my deepening intellectual interest in the Right to the City. 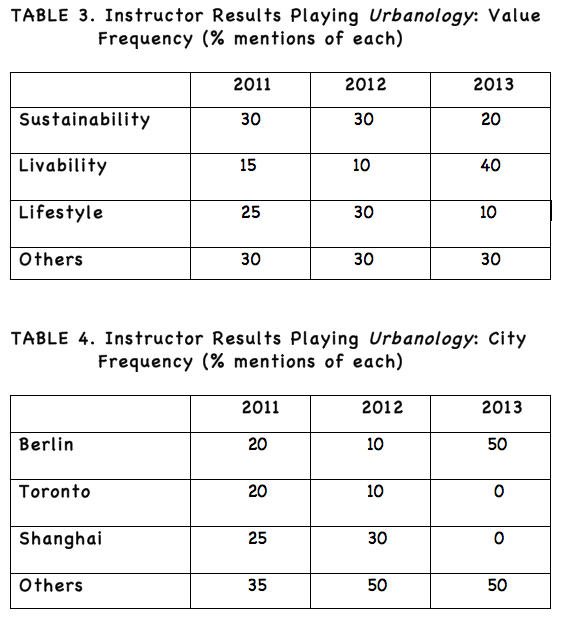 Obviously, you can't take Urbanology's results  too far.  But at the very least one virtue of the game is that students  enjoy playing it.  A student comment on the anonymous end-of-term course evaluation in 2011 captures, I think, the consensus opinion of students in all three classes about Urbanology's virtues:

The Urbanology game fits the class well. It was a useful tool and timed well as it was used early in the course, and was very fun and stimulating.

Urbanology clearly puts students in touch with compelling urban questions and conundrums that they've never thought about before, as well as their own personal values and politics.  They express a near unanimous desire to see the game developed in such a way as to add more complexity, context-sensitivity, and nuance (i.e., moving away from having to answer "yes/no" to difficult questions).   The game-playing results reported above may suggest that evolution of the existing game by question addition could be accomplishing that.  If nothing else the game is  an excellent conversation starter about the kinds of choices and compromises that have to be made in designing and developing the contemporary city.