A pedestrian braves the challenges of sprawl 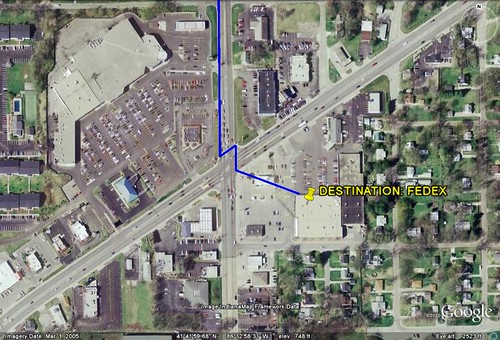 Architect Christine Franck and I travel in some of the same urbanist circles.  Recently she was a visiting professor at the University of Notre Dame in South Bend, Indiana, which sounds like a pretty good gig to me.

Her time in South Bend is the subject of this essay, which Christine wrote on her own posterous blog and has been kind enough to allow me to share.  I have illustrated it by noodling around Google Earth.  As you will soon see, the daily life of a visiting professor (even within shouting distance of Touchdown Jesus) is not without complication or risk: 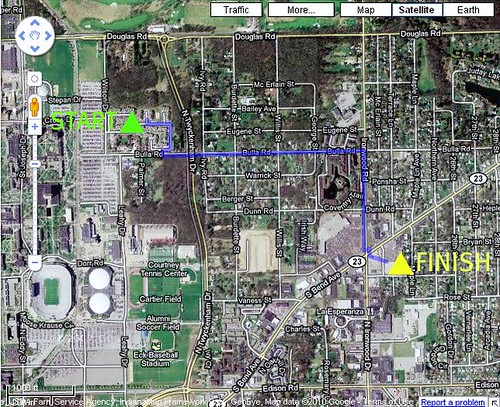 Thirteen years now I have lived without a car. On my own two feet, or by subway, bus, taxi, or ferry, I've easily navigated nearly every corner of New York, from the tip of Manhattan to the Bronx. So, I thought, walking from my temporary residence at Notre Dame, where I am a visiting professor in the School of Architecture this semester, a mile or so to FedEx/Kinko's would be a nice Saturday morning stroll.

Indeed turning down Bulla Road, a simple, residential street lined with little bungalows was pleasant. After a long dreary Midwest winter the forsythia's bright, sunny blooms and pastel plastic Easter eggs hung from trees were cheery. Not one car passed me as I walked on the edge of the narrow road. Nor one person.

(The route begins in a pleasant apartment complex) 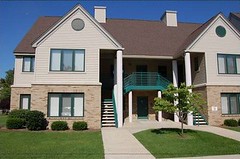 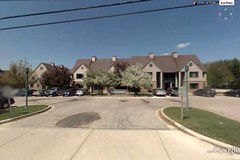 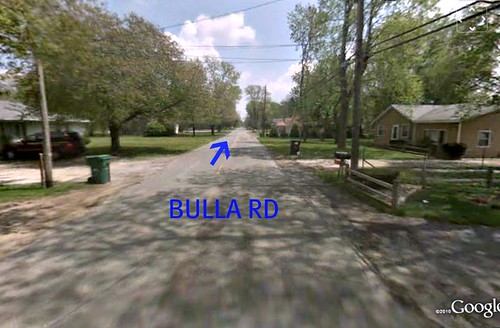 A short ten minutes walk later, on the ridge ahead, where I knew I would need to turn right, I saw the traffic zooming along Ironwood, a four-lane 55mph state route. The unknown territory ahead scared me. 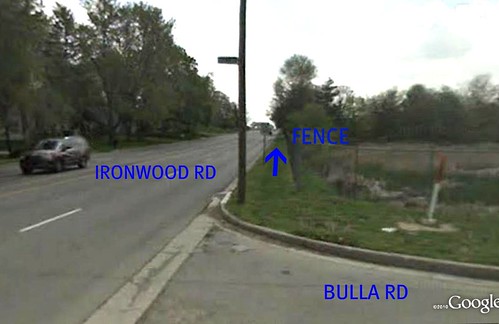 Reaching the intersection, I was pleased to see at least a three foot wide grass strip on the edge of the road. Even so, being wedged between four lanes of zooming traffic on one side and a six foot tall fence on the other made me feel I was balancing on the narrowest beam. Not one blade of grass appeared to have been trod before my pioneering footsteps.

Crossing the great divide formed by the entrance, or was it the exit, drive of an old condominium development was a real challenge. The grass path I had been following dead-ended into a four foot deep, two foot tall briar patch of ornamental landscaping. 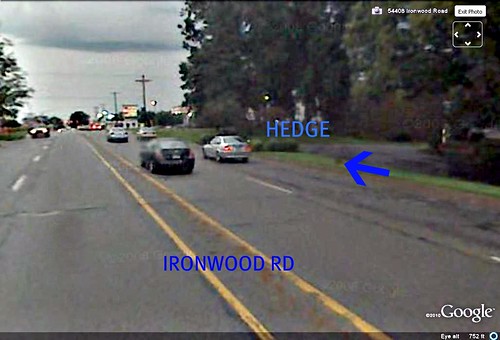 I didn't think I could leap four feet. Nor could I scale the steep hill down to the condo parking lot and wedge myself through the barrier of cars to go around the shrubbery. But then I saw it: a narrow four inch wide pass between the sharp edge of the bushes and the whizzing lanes of traffic. Grasping my purse tightly and balancing carefully, I squeezed through this tight pass, crossed the top of the drive, and then the opposite shrub pass. 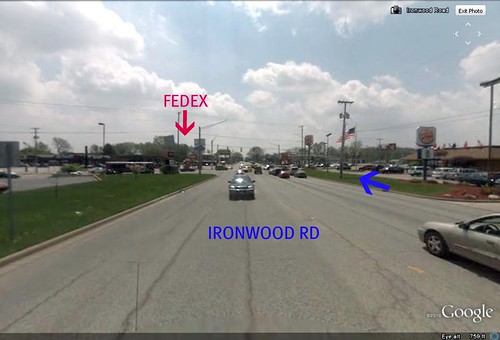 Slowly, the intersection I sought came into view. Somewhere ahead, buried in a miasma of mall strips surrounding an intersection of two six-lane, high-speed, dedicated-left-turn-lane roads was FedEx/Kinko's. At this point, I decided wading through parking lots and doing battle with giant herds of SUVs would be safer than continuing my path along the road. Besides, I had started to feel very conspicuous being the lone pedestrian. 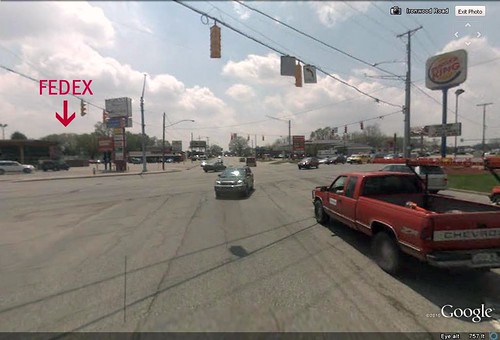 I had hoped I wouldn't have to cross the intersection, the great divide, but then it came into view. Finally. FedEx/Kinko's. All the way on the opposite side of the intersection.

Now, I'm pretty good at crossing a busy street. Having learned how to perform the delicate ballet between car, pedestrian, and Vespas while living in Rome, I don't give crosswalk signals more than a second glance. Being used to zipping halfway across a street, mid-block, and gracefully balancing on the dividing line between passing buses before dashing the rest of the way across a busy New York street, I thought I could handle anything. But this relatively small suburban intersection looked wide as the Grand Canyon. 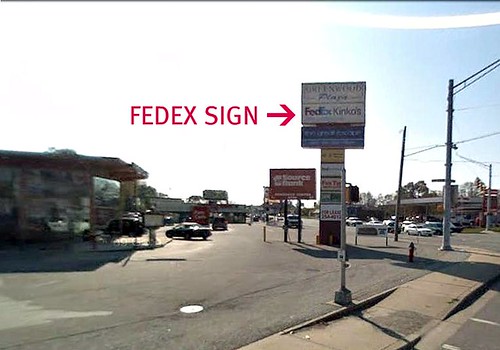 Descending the parking lot berm to the small paved corner of the intersection, I finally found the crosswalk button. An eternity passed, but when the walk signal finally shone safely white, I stepped off the edge. Crossing the first lane and passing a giant SUV, I was sure at any moment it would get restless and charge forward. Then I passed the second lane of traffic, and the third. I was going to make it!

Ignoring the herds of traffic galloping past me on my right, as drivers hurried heavy-footed to make the light, I looked up to see the warning signal was flashing. Out of time, I strode boldly across the last three lanes of traffic just reaching the opposite side before the light changed. Repeating this again, across six more lanes, past huffing and puffing, impatient vehicles, I finally made it all the way across. 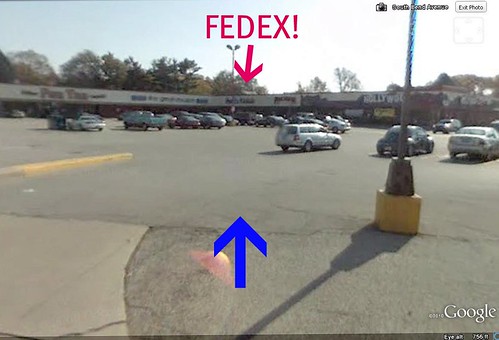 As I walked triumphantly across the parking lot to my destination, a small car drove in front of me. I was not surprised to find inside the common suburban species of an obese woman driving her three obese children. They filled every available inch of space inside the car with their fleshy volume.

Mission accomplished at FedEx/Kinko's I have now taken momentary refuge inside a drive-thru Starbucks. The coffee is over-roasted, as always, but at least here there are other human beings. And the New York Times.

Heavy gray clouds on the horizon, beyond the fake suburban roofs, threaten rain. I must set off soon for my return journey. Wondering all the while, at every precarious step, why we have built this awful suburban world for ourselves.

Christine G.H. Franck is a New York City-based designer and educator with a holistic
practice dedicated to improving the built environment.  Her many accomplishments and awards include having been honored by HRH The Prince of Wales with a Public Service Award from the Prince's Foundation for "her outstanding contribution to the study of architecture and design."