The "Real Question" for Baltimore and the American City

Behind the clever New Yorker cover of the star spangled banner with a punched out star like the broken glass of a store front, Jelani Cobb addressed Baltimore in his column, "Talk of the Town,"  concluding that the real question raised by the recent unrest is: What should life in an American city be? 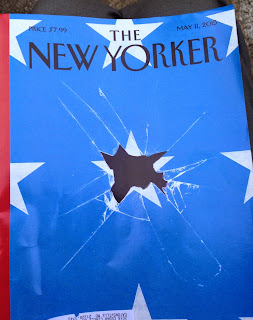 Although this question clearly reaches beyond architects and urban planners, they in particular may scratch their heads over it. Hasn't this very question already been answered? After decades of pondering, hasn't the clear consensus emerged that the American city should follow the journalist Jane Jacobs ("Death and Life of American Cities"), not Robert Moses (the legendary New York Commissioner)? Hasn't this new consensus just brought about a revival of the American city in which the new paradigm asks how well one can walk in the city instead of how fast one can drive out of it? In the new paradigm, vibrant, "mixed use" developments, preferably in reused industrial buildings, get points for bursting with coffee shops and sidewalk seating.

Cities with a funky music scene, theaters, comedy clubs, galleries and art districts score high in the "livability" index. And what about Charm City itself? Hadn't it become a shining beacon for the come-back city with its downtown stadiums, waterfront reclamation, farmers markets, ethnic festivals, urban gardening, local food and beer? Hadn't it become attractive not only for the young but for the aging as well, ranked among the top ten livable cities by AARP?

Far from a struggling post-industrial region primarily characterized by stagnant or falling incomes, the Baltimore metro area today is relatively affluent. Per capita incomes in the Baltimore region rose faster than in any other major metro area from 2000 to 2013. Regionwide, African American households share in that prosperity. And the city of Baltimore itself boasts large numbers of high-paying jobs in industries such as education, health care, and professional services, particularly in its downtown core along the Inner Harbor and adjoining neighborhoods.(Berube, Brookings) 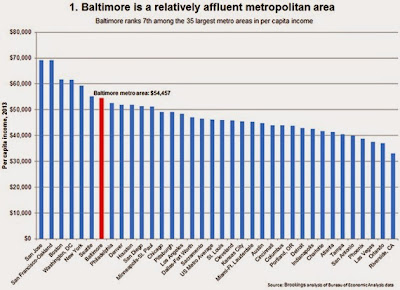 Baltimore was doing well on almost all of these metrics, plus it scored authenticity points for its water taxi, the Charm City circulator bus, Fort McHenry and several of the best hospitals in the country. Indeed, the answer to how American city life should be was echoing in Baltimore and throughout urban America, where it was declared that we are in the "Age of Cities."

Until April 27, 2015, the date of the Baltimore unrest.  The unrest allowed Cobb and commentators in the national and international press to raise the urban question once more. Rioters had thrown the spotlight on the large parts of the American City that had not participated in urban renaissance and were, therefore, far from jubilant about it. From Baltimore's Harbor the attention shifted to:

Instantly people around the world remembered "The Wire" and saw that not much had changed: Poor people in urban America were still being left out. Wisely, most did not blame Baltimore, but recognized the problem as one plaguing the American city in general, and many cities around the globe.

In these respects, Baltimore is a typical American city. Its level of concentrated poverty is average among cities in major metropolitan areas. While Baltimore has a higher overall poverty rate than most other cities, its level of income inequality mirrors that for U.S. cities generally. And Baltimore's depressing outcomes for black residents on poverty and employment are actually better than those in a majority of other cities with large black populations.In sum, Baltimore is a region on the upswing economically, but one in which stability and prosperity are distributed highly unequally across racial and community lines. That is more or less the norm in metropolitan America today, and a stark challenge to economic growth patterns that have left too many behind for too long. (Berube, Brookings) 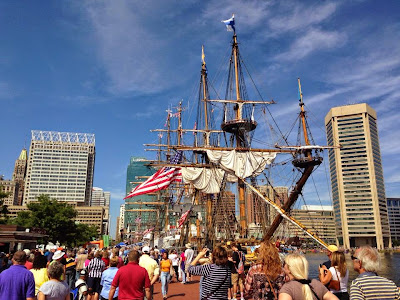 What is to be learned?

The city of the future must not only be a playground for tourists, entertainment for conventioneers and day trippers, or an urban adventure zone for millenials. The emphasis on memorable places, walking, biking, good open spaces and active mobility is all good. But brick and mortar alone aren't the answer to Jelani Cobb's question about life in an American city.

For a city's future to be bright, the brick and mortar must take the form of quality affordable housing, workplaces where employed people make and create things, and bright centers of the community like schools, rec centers and libraries, not prisons. Corner stores citywide need to offer life's essentials within a short walk, not just liquor and drugs behind bullet proof glass. Every neighborhood must be safe enough that children can play without fear of being gunned down in broad daylight.

All life must be protected, not just pedestrians and bikers passing through. 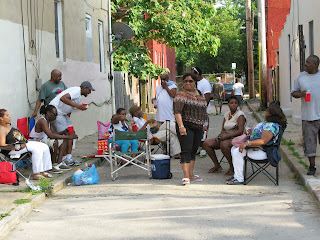 How can this be achieved in a world that worships the "market," which turns its back on communities that are impoverished, where people are undereducated and underemployed, and leaves it to government, charity and non-profits to care? There is no simple answer, except to say that the "next city" needs to complement physical place-making with social place-making. "Social capital" needs to be nurtured as much as entrepreneurial capital to achieve true community. Residents of all classes and races need access and services to become engaged and vested in their city so they will be truly a part of its future.

Professionals of many disciplines cannot only assist in making this kind of inclusionary city, they may have to unlearn certain practices first as law professor Sarah Schindler observed in her paper about "Architectural Exclusion", a practice one can also find in Baltimore from Roland Park to Guilford and from the public housing projects to the "highway to nowhere":

The built environment is characterized by man-made physical features that make it difficult for certain individuals — often poor people and people of color — to access certain places. Bridges were designed to be so low that buses could not pass under them in order to prevent people of color from accessing a public beach. Walls, fences, and highways separate historically white neighborhoods from historically black ones. Wealthy communities have declined to be served by public transit so as to make it difficult for individuals from poorer areas to access their neighborhoods.

Although the law has addressed the exclusionary impacts of racially restrictive covenants and zoning ordinances, most legal scholars, courts, and legislatures have given little attention to the use of these less obvious exclusionary urban design tactics. Street grid layouts, one-way streets, the absence of sidewalks and crosswalks, and other design elements can shape the demographics of a city and isolate a neighborhood from those surrounding it. In this way, the exclusionary built environment — the architecture of a place — functions as a form of regulation; it constrains the behavior of those who interact with it, often without their even realizing it. (Schindler)

None of this is new. In fact, it's all old hat. Still, it took yet another jolt to remind us that the blueprint for the city of the future is not viable if postcard conditions exist in only one half.