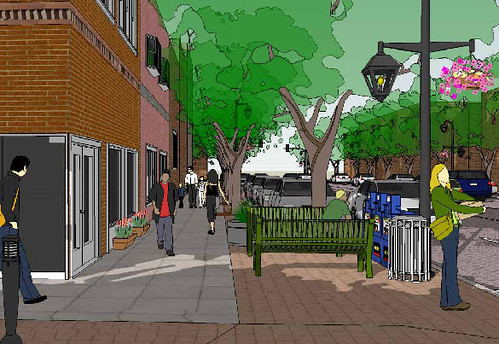 A month-long test of a redesigned "complete street" on one of St. Louis's neighborhood thoroughfares has proven immensely popular with residents, prompting the city to go forward with full construction of the first of four planned demonstration projects for community-friendly streetscapes.  According to a press release from the region's East-West Gateway Council of Governments, the city is narrowing traffic on a six-block stretch of South Grand Street from four lanes to three (two for though travel and a center lane for turning), and adding sidewalk and parking improvements "to calm traffic, create a more pedestrian-friendly environment, and encourage continued economic development." The city is also adding bike lanes on both sides of the street.

Miriam Moynihan writes in The Architect's Newspaper that the 30-day test, which used temporary structures and new lane striping for a three-lane configuration, was a huge success, with public feedback running ten-to-one in favor of the proposal. According to Moynihan:

"South Grand, the test site, is a busy street lined with restaurants and shops. But traffic, signage, and aging infrastructure are a problem. Drivers routinely speed, and the street saw 80 accidents and one pedestrian death in the first eight months of 2009. 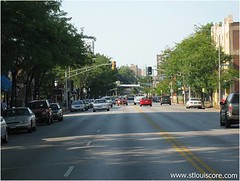 Alderman Jennifer Florida, whose ward includes the west side of the street, points out that one major intersection has no cues at all for pedestrians to cross . . .

"The new design reduces four traffic lanes to three, changes the timing of traffic lights, adds curb 'bulb-outs' to reduce the amount of yardage pedestrians need to cross from 56 to 40 feet, and increases lighting and landscaping. About $2.7 million in federal stimulus funds have been awarded for the work."

South Grand, where construction of the street improvements will commence in the spring, is one of the locations selected for the East-West Gateway COG's Great Streets initiative. Alderman Steve Conway, who represents constituents to the east of the corridor, has also been a strong supporter of the project. The configuration put in place for the 30-day test will remain while construction is pending.

Fifty percent of the new portions of street and sidewalk infrastructure will be porous to absorb stormwater, according to the design team led by Design Workshop of Aspen, Colorado.  Lots more details on the project are contained in an excellent booklet issued by the East-West Gateway COG.

A story posted on StLouisCore.com reports that the South Grand street project was proposed by the neighborhood's Community Improvement District as a way of boosting the economic health of the neighborhood through placemaking. I believe it is likely to do just that.