Almost all discussion of transit-accessible development that I have been part of has revolved around mixed-use neighborhoods and/or affordable housing.  Both are important and much needed.

But so are transit-accessible jobs.  As the Center for Neighborhood Technology points out in a new report, Next Stop: New Jobs (2MB download), many parcels of land within walking distance of rail transit are or could be well-suited to industrial and commercial uses: 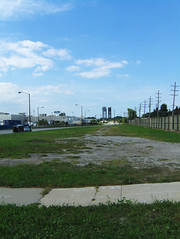 "[M]uch vacant land within station areas is strictly zoned for manufacturing or commercial purposes that could attract businesses offering living wages.  Furthermore, job creation near transit can lead to more destinations along a corridor, creating demand for transit outside of the central business district (CBD) and, conceivably, in a reverse-commute direction during peak and off-peak travel times.  This would spread ridership out along the system and make more optimal use of its carrying capacity over the course of the day."

This is a very good point.  While I think we must take care not to exacerbate job dispersal, already a major component of sprawl, taking advantage of properties along transit lines that may be best suited for non-residential use makes a lot of sense.  The result would almost certainly be lower rates of driving and emissions, particularly as both housing and jobs became transit-accessible.

CNT focuses its report on its home region of Chicago, examining over 50 rail station areas with economic development potential in the manufacturing and commercial sectors.  Each is evaluated using a GIS tool the organization calls the "Employment Opportunity Optimizer," which synthesizes "a number of characteristics— transit service, zoning, land use, population density and market potential—generally associated with successful developments and then determines which station areas are best suited for manufacturing or commercial uses."  Chicago's rich rail network  makes it ideal for such an analysis, and the top-scoring sites are highlighted in the report. 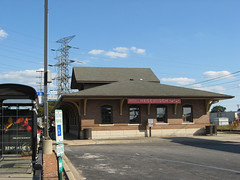 For sites with manufacturing potential, the Optimizer employed 18 variables, favoring station areas with large populations, low current employment and large amounts of vacant land zoned for manufacturing or planned manufacturing - excellent ingredients for economic development.  CNT found that many of the best-suited sites for manufacturing are located on Chicago's south and west sides.  The leading site, Hegewisch on the South Shore line (photos above and left), has 44 acres of available land already with appropriate zoning.

The report recommends that buffer districts of lighter manufacturing or commercial uses be placed between heavy industrial sites and residential areas.

CNT performed a separate analysis of transit zones to determine their potential for commercial use.  For this exercise, the Optimizer synthesized eleven, somewhat different criteria:

"The Optimizer screened for densely populated areas with high aggregate incomes, as a strong customer base is fundamental to achieving a sustainable volume of sales.  An average stock of existing businesses was also a priority, as a market already saturated with many establishments would prohibit new ones from forming, while an area with too few would generally increase the risk of investment and decrease the likelihood of new developments. 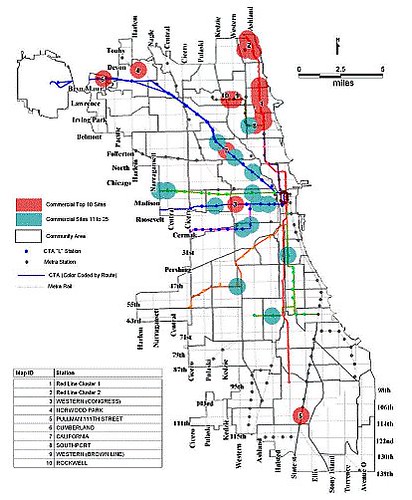 The top- and second-ranked areas for commercial potential were not single station areas but aggregates of adjacent zones around six and four transit stations, respectively.  The map shown at right identifies the top ten sites for commercial use in red, the next best sites in blue-green.

Of course, just as with residential and mixed residential/commercial development, land allocation and identification of key demographic data only get you so far.  The assessment of market feasibility is a complicated yet critical matter, as the report acknowledges, especially in the current economy.

That said, I find the concept of examining transit sites for employment potential to be an important contribution to our thinking about smart growth, transportation, and sustainability.  As with the intricacies of clean and efficient freight transport, this is something that really hasn't been explored nearly enough.  The report makes a number of recommendations for more sophisticated analysis, as well as recommendations for supportive policy, including improving transit service in certain key locations.