One thing that I have learned in six months in my new position as director of sustainable communities at NRDC is even a lot of environmentalists don't quite know what to make of the phrase.  For some of us in the field the principles are ingrained and at this point even assumed; but, for others, sustainable communities is a relatively new and somewhat elusive concept.  This may be particularly true for my fellow travelers in the legal profession, who tend to think in terms of statutory mandates and causes of action and have little patience with the fuzzy stuff.

So in this post I am returning to the basics, which bear repeating.  Let's begin by borrowing from a definition I found in a planning document from the state of Maryland.  It packs a lot into one paragraph:

"Sustainable communities share a common purpose:  places where people thrive to enjoy good health and create a high quality of life.  A sustainable community reflects the interdependence of economic, environmental, and social issues by acknowledging that regions, cities, towns and rural lands must continue into the future without diminishing the land, water, air, natural and cultural resources that support them.  Housing, transportation and resource conservation are managed in ways that retain the economic, ecological and scenic values of the environment. And they are communities where the consumption of fossil fuels, emissions of greenhouse gases, water resources and pollution are minimized."

Note the emphasis on places; to a great extent, this is about what many of us have come to call "placemaking."  It starts with the built environment, but doesn't end there. 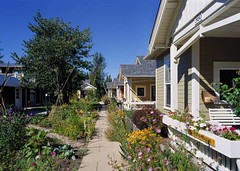 More specifically to an environmental group such as NRDC, where I work, we use the phrase to describe places where per capita use of resources and per capita emissions of greenhouse gases and other pollutants are going down, not up; where the air and waterways are accessible and clean; where land is used efficiently, and shared parks and public spaces are plentiful and easily visited; where people of different ages, income levels and cultural backgrounds share equally in environmental, social and cultural benefits; where many needs of daily life can be met within a 20-minute walk, and all may be met within a 20-minute transit ride; where industry and economic opportunity emphasize healthy, environmentally sound practices.

For a feel of what this looks like on the ground, let's take a short journey together.  On the way to our destination on the high-speed train, we pass through a rolling rural landscape dotted with farms, forests, and windmills, until we come to the urban growth boundary of the Sustainaville metro region.  The landscape abruptly changes to well-ordered development.

At the first stop inside the developed area, we can tell that we are in a suburb, but it doesn't look like suburbs built in the 1960s and 1970s.  For one thing, there is a lot more green space, not so much in private yards, but in neighborhood-sized green squares 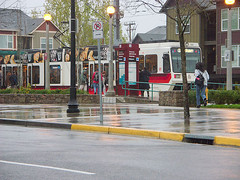 around which are clustered different types of homes – apartments, townhomes, and single-family, offered at different price points and mixed together, not separated.  Some of the squares also have neighborhood shops, including in one instance a dry cleaner's, a café, a convenience store and a pharmacy on the first floor of a five-story apartment or condo building.  A light rail line runs down the center of the main commercial street.  (We may be in a place similar in some respects to Orenco Station, Portland's iconic transit-oriented suburb.)

We disembark and transfer to the light rail, which runs to Sustainaville's downtown.  We get off in an older, revitalizing neighborhood, largely abandoned in the 1960s and 1970s but now healthy again after a grassroots-led restoration.  (We might now be in a place like Old North Saint Louis is rapidly becoming; or Melrose Commons in the South Bronx, whose plan has been certified gold under LEED-ND; or Oakland's Fruitvale Village, whose grassroots-led rebirth was financed in part by NRDC's development partner, the Local Initiatives Support Corporation.)  At the rail stop, we see carshare and bikeshare stations, cafés, shops and services.

Venturing into the residential area, we notice kids walking home from school, the little ones with their parents, the big ones with their friends, because they can; their homes are all within a 15-minute walk on well-connected, slow-speed streets with porous-pavement sidewalks on both sides, native street 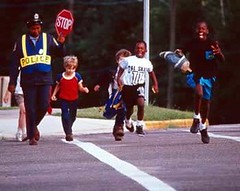 trees, and parking spaces for cars and bikes by the curb, which buffers the street from the pedestrians.  Walking further, we see that there is an elementary school beside a small park, and we can see another in the distance.  The school has solar panels and a green roof, as does a condo building on the park.  Both have small parking lots in the rear shaded by mature trees and surfaced with porous pavers to filter stormwater.

Then we notice that the park has a small space in one of the corners devoted to a neighborhood vegetable garden, which is being tended by some elderly residents.  One of them adds some tomatoes to her wheeled cart, which already has reusable canvas bags bearing the name of the supermarket where she just shopped two blocks away; she then continues walking to her restored townhouse, with native vegetation in the small front and rear yards.  We pass a barber taking a break outside his shop.

There are other small, local businesses mixed in with homes and places of worship.  Several of the small neighborhood restaurants are advertising that they serve only local food.  On a basketball court beside one of the schools, a team of African-American and Asian teenagers is absolutely crushing one composed of whites and Latinos, but everyone seems to be joking and having a good time; one of the Latinos drains a three-pointer and suddenly his team has hope after all.

This does not describe every aspect of a sustainable community, or every type.  To be complete, we would also discuss, for example, clean industry and waterways; universal access by people of varying abilities; and more.

But it's not a bad start, in my opinion.  It basically describes the vision of a sustainable community created jointly by some 25 attendees at NRDC's recent sustainable communities planning retreat.  Utopian?  Maybe so, but since when has the environmental community not been idealistic?  We must know where we would like to go in order to choose our steps along the way.