Where the bike commuters are, mapped & analyzed 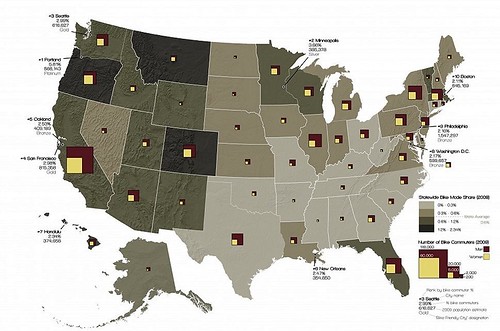 Check out this map produced by the League of American Bicyclists and posted on the graphics site Visual.ly.  The fonts are small - this image looks intended for a wall, not a computer - but look closely:  the darker the state, the larger the share of total trips taken by bicycle, as opposed to driving, walking, or transit; the larger the maroon and yellow box, the larger the number of people commuting to work by bicycle.  You can see that California, followed by Florida and New York, have the largest number of bike commuters.  But, when you go by mode share - the portion of total trips taken by bike - the leading states appear to be Colorado, Oregon, and (improbably?) Montana.  It is hard to tell for sure, but I believe the data came from multiple sources, including the US Census's American Community Survey.

The map also indicates (in tiny print) the country's ten cities with the highest mode share for bicycling.  Unsurprisingly, Portland ranks first; but I might not have guessed that Minneapolis is second, especially given that city's notorious winter weather.  A larger version of the map contains additional graphics (two excerpted below, with small but readable fonts) that show the total numbers for the top ten cities, as well as some other interesting data, including overall spending on cycling infrastructure. 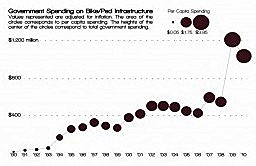 In closely related news, the Department of Housing and Urban Development's Sustainable Communities Resource Center reports research showing that "cities with more bike paths and lanes have significantly higher rates of bike commuting, even when factors that influence cycling rates – such as weather, cycling safety, degree of sprawl, and the price of gasoline – are taken into account."  The findings in this study of 90 cities, conducted by Ralph Buehler of Virginia Tech and John Pucher of Rutgers and published in the journal Transportation, are consistent with earlier datra showing that cycling activity increased in Portland in the corridors where the city added bike lanes.

Of the cities included in the Buehler-Pucher study, Portland, Madison, Minneapolis, Boise, and Seattle had the highest percentages of bike commuters.  (I suspect the top performers differ somewhat from the cities highlighted in the LAB graphic because the mode-share numbers in the graphic include non-work trips.) 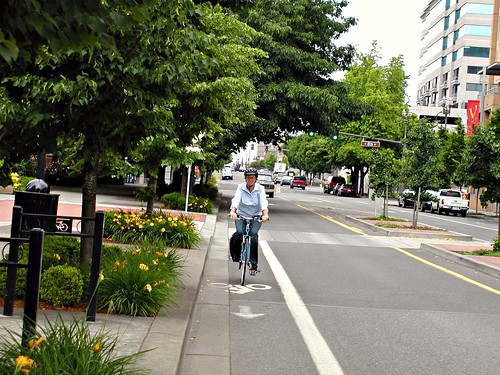 Finally for today, a new study from the Mineta Transportation Institute at San Jose State (conducted in collaboration with other researchers) posits that the key to bike commuting by so-called "level two" cyclists – those who will ride if car traffic is minimal – is a low-stress, well-connected and relatively direct route.  (As with walking, street connectivity - relatively frequent intersections, few dead-ends - is hugely important.)

That may seem a bit of a tautology, but what could prove useful from the study is that the analysts mapped every street in San Jose according to "traffic stress," classifying them into four levels.  They found that only about five percent of shorter (under six miles) work trips in San Jose could currently be accomplished on low-stress (levels one and two) streets, but "this figure would almost triple" if a proposed slate of modest improvements in "strategically placed segments that provide low-stress connectivity across barriers were implemented."  If additional analysts and transportation planners find the traffic-stress classification to be useful, it could become an asset in bike route mapping in other cities. 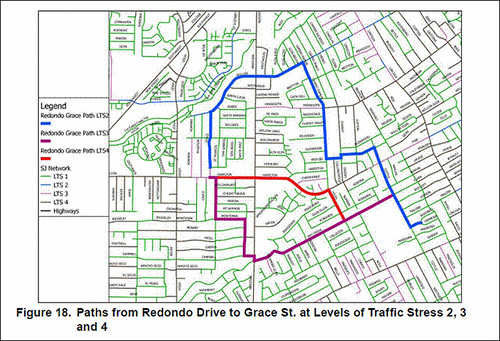 Bicycling remains a small part of most American cities' transportation profiles, especially in comparison to world leaders such as Amsterdam and Copenhagen.  But there is little question that it is gaining in popularity, especially in places that are supporting the trend with investment in cycling infrastructure.

Kaid Benfield writes about community, development, and the environment, here and in the national media.  For more posts, see his blog's home page.