Transportation: Why Johnny and Joanie Can't Walk to School 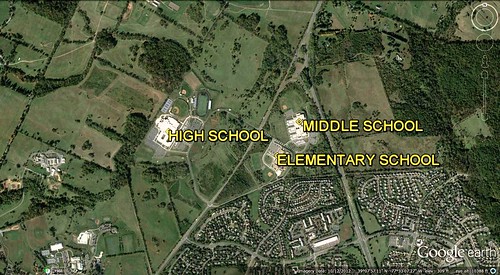 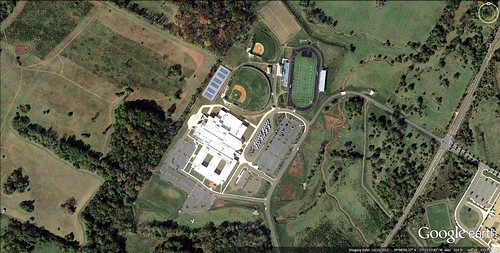 In rapidly suburbanizing Loudoun County, Virginia, west of Washington, DC, parents are up in arms about a substantial cutback in school bus service.  According to an article written by Michael Alison Chandler and published in yesterday's Washington Post, about 4,000 students who used to ride school buses will be expected to find another way to class in the coming school year.  We need to reduce the budget, say county officials.

If I were a parent in Loudoun County, I'd be upset, too.  Growth there has essentially been a leapfrog pattern of automobile-dependent sprawl since the county began transforming from farmland to new suburbs a couple of decades ago.  It's the usual mix of wide arterial roads, connectors with no sidewalks, and randomly placed cul-de-sac subdivisions.

School sprawl has been part of the pattern, too, with large campuses placed at a distance from most students and their families.  Check out the locations of three Loudoun County schools on the satellite map above:  they have all been placed on former farmland just beyond the reach of sprawling new subdivisions.  And please don't think I'm picking on Loudoun County; this is the case all over suburban America.

For all sorts of reasons, we'd be better off without this growth pattern at all but, since it exists, school bus service is essential, particularly for working parents.  (It is also more environmentally efficient than parents' taking kids to school in separate vehicles.) 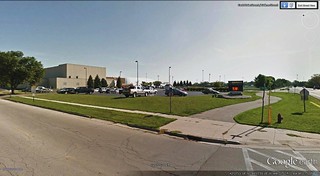 As recently as the 1970s, a majority of school kids walked or biked to school.  Today, almost entirely because of sprawl, fewer than fifteen percent do.

One mom was quoted in Chandler's article as saying her rising ninth-grader will "have to cross 15 lanes of active traffic in order to access her right to a public education."  Bus service will still be provided to kids who live more than a mile away from the edge of their school's campus, according to Loudoun officials, but that ignores the challenges of walking even short distances in sprawl.  Summarizing those problems, Chandler writes:

"Walking to school in Loudoun County can be difficult, parents said. The outer suburb was developed around cars, and residential developments have piecemeal (or nonexistent) walking paths and sidewalks.  In Leesburg, some of the schools were not built within neighborhoods but on vast tracts of land nearby.

"The entrance road to Tuscarora High School [shown in the satellite image] is nearly a half-mile long — a distance not calculated into the new walking zones. And the proposed way to access Smart's Mill Middle [also in the image] is via a long road that parents described as 'desolate.'"

In the close-up of Tuscarora High School at the top of the post, note not just the school's remote location but also the parking lots, occupying more space than the school itself, and the absence of sidewalks until one actually gets onto school property.  Again, this doesn't just describe Loudoun County.  It describes much of America.  One of the online comments on Chandler's article was particularly astute:

"Walking up to a mile should not be a big deal.  But it has become one because short sighted planning (or none at all) to accommodate pedestrians has made it difficult and/or dangerous."

The truth is that Loudoun's schools are theoretically within walking distance for some students, but there's a lot more to walkability than proximity. 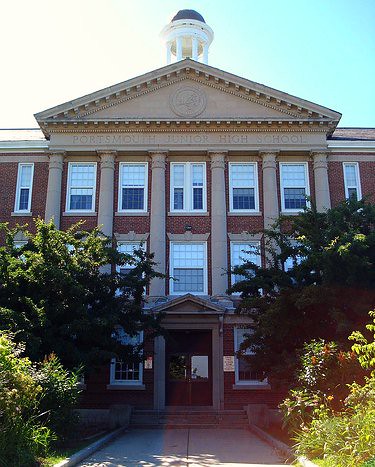 According to the Centers for Disease Control, childhood obesity has more than doubled in children and tripled in adolescents in the past 30 years.  In 2010, more than one third of children and adolescents were overweight or obese.  Obese youth have elevated risk factors for cardiovascular disease, diabetes, bone and joint problems, sleep apnea, and social and psychological problems such as stigmatization and poor self-esteem, according to the CDC.

While the reasons for the dramatic increase in childhood obesity surely are many and complex, one of them is reduced physical activity.  Walkable schools could help.

I don't have a good answer for the Loudoun parents and kids, but here are some longer-term, beginning ideas for community planners and officials:

There are many more good ideas out there, especially in Nathan Norris's "report card" for smart growth schools, the National Trust's Helping Johnny Walk to School, and EPA's School Siting Guidelines.  But these would be a start.