America Can Learn from this French City's Complete Streets

Strasbourg, France is a beautiful city that takes its complete streets to heart. The roads through the old (and new) city gracefully mix street trams/lightrail with bicycle paths and friendly traffic calmed streets. Pedestrians move easily. Its central intercity train station is housed in a glamorous historic building, sheathed in a chic modern glass shell. 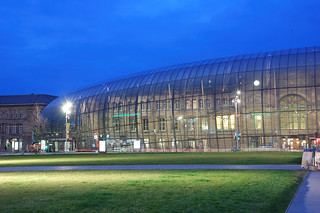 My family moved to Strasbourg when I was 12.  In French school, I comprehended little, and regularly escaped the gates of Le Lycée International des Pontonniers to explore the city by foot and public transportation.  It was liberating to take my lunch money and spend it in boulangeries around town or even into Germany across the Rhine River.  My parents thought I was in school and I may not have been in the country!

Given the quality of its infrastructure, it would be easy to think the French city is quite large. In fact, Strasbourg is a metro area with a population the size of Albany, Little Rock, Colorado Springs and would rank 73rd in US metro size behind Colombia, SC. 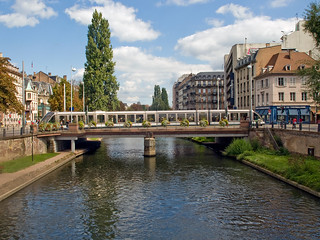 Tram gliding through town. Photo by Gerry Balding on flickr

(Strasbourg's trams function as a hybrid of US Street cars and US Light rail. The rail vehicles are similar to streetcars because they are mostly in the roadbed and integrate into the city's fabric, but unlike streetcars, operate with their own right of way separate from traffic, in this regard more like light rail.) 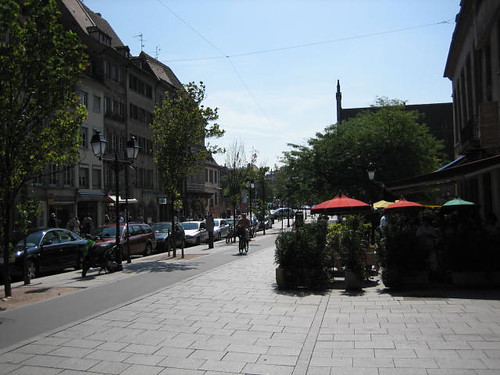 Streets are for diners and transport of different varieties. Photo by Brisan on flickr

Baltimore County, Baltimore City, and US  crawl toward complete streets

Many US cities have adopted complete street ordinances and individual streets have been retrofitted.  Close by, Baltimore County has been recognized as a national leader for Complete Streets.  Baltimore County ranked 6th among 83 communities in the US with Complete Streets programs. Despite this recognition, the County's on road bike network is minimal, members of the Baltimore County Pedestrian and Bicycle Advisory Committee are agitated at the lack of commitment to projects, the county has missed the mark on its pedestrian safety campaign, and now it's county executive struggles to find a $50 million contribution for the $2.4 billion Red Line his administration says it supports.

Future home of the Towson Bike Beltway in Baltimore County

In Baltimore City, Council Bill 09-0433 was adopted in 2010 directing the Departments of Transportation and Planning to apply "Complete Streets" principles to the planning, design, and construction of all new City transportation improvement projects.

Despite the accolades and the policies, "complete streets" in Baltimore County and Baltimore City still feel foreign. On the ground implementation remains the elusive prize. High incidences of tragic pedestrian, bicycle, and vehicle crashes are more associated with user error than engineering design. Complete Street advocates look forward to seeing first rate projects in the city and the suburbs get designed, funded and become reality. In the meantime, please enjoy a few photos of a "complete streets" city that I used to roam.

This gallery depicts regular infrastructure treatments in the heart of the city that help create a safe and user friendly balance of transportation options.