Boise Bike Culture: What We Can Learn from the City of Trees

Far from the top, but well on their way, Boise has been nominated the 32nd most bike friendly city in America last year by Bicycling.com. In order to be considered for this list, the city must have both an established cycling infrastructure that is improving and an established culture of cyclists. As a previous resident of Meridian (essentially Boise's suburb) I can attest to the rapidly improving friendliness of the city towards cyclists, but since I moved to Portland (The number 1 most bike friendly city) I also realize just how much needs to be improved.

How it's a bike friendly city:

The Boise Greenbelt is without a doubt the anchor of what makes Boise a great city to bike in. Spanning 22 miles, 2 cities, 12 public parks, Boise State University, and several ponds/reservoirs, the Greenbelt is a major artery for walkers and bikers all throughout Boise. In addition to the main path that hugs the river, there are multiple branches that connect to other main thoroughfares and cyclist friendly areas. A corps of police officers, trained volunteers, and even a few rangers (Think Walker Texas type) patrol the pathways year round on foot, golf carts, and on bicycles.

More and more the streets of Boise are becoming cyclist friendly, more bike lanes, "sharrow" lanes where drivers can expect to see cyclists in traffic with them and dedicated pedestrian streets are on the rise. Probably the most well-known pedestrian only walkway is located in Boise Downtown. Two blocks of 8th street in Downtown Boise are blocked off by bollards and contain numerous bike bollards for bicycle parking and is located only a few blocks off of the greenbelt.

The cycling culture of Boise is growing rapidly; last year Rick Overton, a member of the Treasure Valley Cycling Alliance board, estimated that there has been roughly a 40% increase in cyclist in the last five years placing the number of daily commuters to about 4,000-6,000. Additionally, nonprofit bicycle programs have developed, most notably the Boise Bike Project  who has had explosive growth over the last few years and has donated over 2,500 bikes to children in need.

What can be improved: 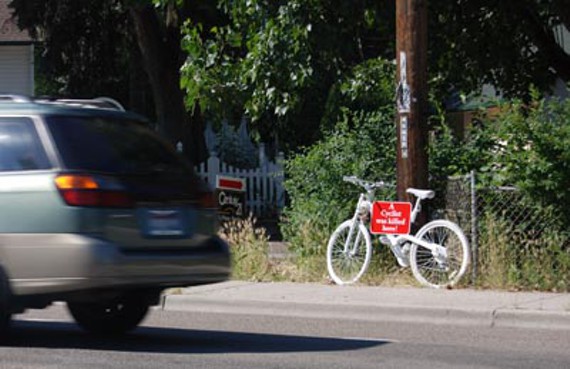 Unfortunately Ghost Bikes dot the Treasure Valley as a somber reminder that there is still a long road to making Boise streets safe for all users. There are an unfortunate amount of driver/cyclist accidents that happen with devastating consequences.

Various organizations are increasing the awareness of both cyclists and drivers to decrease the amount of car/bike accidents and increase the safety of commuting by cycling. The Boise Bike Project, Boise Street Smart Cycling and Treasure Valley Cycling Alliance are great resources for information on how to commute safely and sponsor petitions for changes to be made at the legislative level to make the roads safer.

Increasing the safety and commutability of Boise is important on several levels.  With the presence of Boise State University and several other colleges and university outposts, there is a large population of young students who rely on bikes, longboards, walking, and other non-motorized modes of transportation on a daily basis. Without access to a car and the public transport system improving, but not as robust as some require, cycling is their only means of transport to class, work, and social events.

Boise is also located in a valley; this means inversions that trap pollutants and cause the air quality to decrease dramatically. At first this seems like a detriment to cycling, which it is, but the more people that cycle to work, the fewer pollutants are released and air quality is maintained. Currently the statistics indicate that cyclists in Boise prevent approximately 21,000 tons of vehicle emissions per year being released into the environment.

Finally, cycling is a great healthy practice, both for the body and wallet, and should be practiced as often as possible with the amount of sedentary indoor activities increases with technology. There are some great scenic paths and trails all around Boise that are shaded in the summer and maintained in the fall and winter for a year round cycling experience.