One legacy of South Africa's fragmented, racially-segregated society has been incredible violence. To change that story, the city of Cape Town and the German Development Bank are harnessing the power of design. Through an inventive program, Violence Prevention through Urban Upgrading (VPUU), these players and many local non-profits are transforming Khayelitsha, one of the most dangerous townships in South Africa, into a safer, more livable place. At the World Urban Forum in Medellin, Colombia, the team behind the VPUU program said since the development of this 5-year, $11 million, community-driven project, murders are down 33 percent in Harare, one section of the township, and 22 percent in Khayelitsha overall. Furthermore, almost 90 percent of the area's 250,000 residents say living conditions have improved.

The city assembled a team of local planners, urban designers, landscape architects, and architects to create four "safe nodes," each serving about 50,000 residents. Leading from Harare Square all the way to the Khayelitsha railway station, these nodes provide new infrastructure, such as a well-lit pedestrian mall, which enables "safe walking," said Michael Krause, team leader for the program.

Along the route, there are also new public facilities, including the Peace Park community building, Ncomu road community building and urban park, and Kwamfundo school sports complex. The idea is to provide "opportunities for everyday life and spontaneous activity." Community buildings offer spaces for meetings. These facilities are also rented out, earning income for maintaining the public spaces. There's a new supermarket and retail area, too.

VPUU team landscape architect Tarna Klitzner designed some of the public spaces to be "learning platforms," given only 600 of the area's 4,000 children under 6 are in school. There's a new interactive playground. "These educational interventions also help to create safe public spaces that foster a sense of community," said Krause.

A sense of community seems to be forming. "People are now looking after the public spaces. Graffiti hasn't been a problem." If there are maintenance issues, they are fixed by an on-site crew within 24 hours or less. Also, some neighbors have been given special responsibility for maintaining the new public spaces. They are recognized with brooms.

From the photos, the landscape of Khayelitsha appears quite barren. Kathryn Ewing, and urban designer and architect with Sustainable Urban Neighborhood Development, said "planting trees is difficult given the strong winds. The native
plants are low-growing vegetation." The few trees planted are protected with frames, but these often get stolen.

Ewing told me that Khayelitsha's relationship with water and nature is slowly changing. Water taps are being upgraded, given they are already community gathering spots.

Water tap redevelopment before, during "social activation," and after / Kathryn Ewing 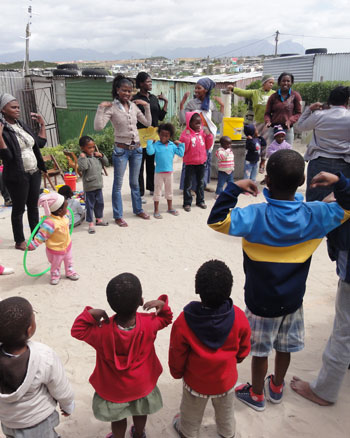 The community came together around the trees planted at the water taps. The trees are supposed to be tended by the children of the area. "This is a social experiment in itself. There's great meaning to having trees in this environment, with its harsh conditions."

Setting up a coordinated system for dealing with excess stormwater has also proven tricky. "There are knock-off effects with stormwater, such as drainage. Where does it go? It's going to impact someone," said Ewing. The design team has experimented with using sand to deal with stormwater management, given applying a comprehensive system of vegetation to deal with runoff is still a ways off.

This program has become a model for other townships in Cape Town. Alistair Graham with the Cape Town city government said 10 more VPUU sites are in the works. Graham believes the first VPUU succeeded because "the development is human-scale. We also clearly defined the hierarchy of spaces, what was public, private, and semi-private."

While these infrastructural improvements have enhanced quality of life, Graham said "we have unfortunately only scratched the surface on our gang issues." Hopefully, this program can help show us what mix of design and social action really works to reduce violence over the long-term.