I'm going to start by being deliberatively provocative:  "cities" don't matter nearly as much as we sometimes suggest.  I surround the word with quotation marks, because I am talking about cities as municipalities with legal boundaries – which is not, by the way, how most people use the word.  And that's where we can get into trouble when it comes to policy.

I know that's a bit over the top.  Of course, cities matter.  But in what sense?  It is important to be careful about vocabulary and about statistics. 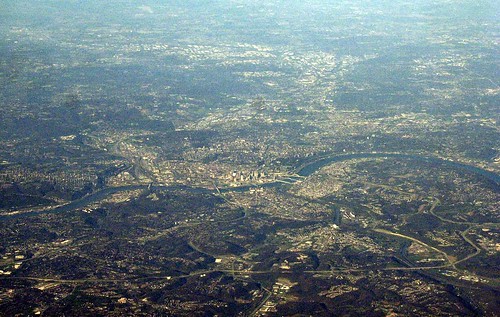 Let me give an example:  a friend in the business of growth management recently returned from a meeting in which there was discussion about so-called "shrinking cities."  This is a very sharp, aware guy.  At that meeting someone reportedly said "29 US cities have grown recently and the rest have shrunk."  This made my friend wonder if we should rethink "smart growth" as being about growth management, since so few places are actually growing.

That didn't sound right to me at all, so I checked the facts:  Of 366 metropolitan areas tracked by the US census, 324 (89 percent) grew between 2000 and 2009; 161 of them, roughly half, grew by ten percent or more in only nine years.  Now, as we all know, central-city population in America was in decline for most of the last several decades, although the trend is clearly toward recovery.  I didn't check the central-city facts.  But my guess is that the speaker had a point he or she wanted to make and chose a very select set of "facts" to support it - probably looking only at a subset of the places tracked by the census, and probably looking only at what was happening inside the central-city jurisdictional boundaries.  Those city limits date back to the early 20th or even 19th century in many cases and bear little relation to how places really function today.

Consider the image below, which shows the city limits of Atlanta drawn on a satellite photo of the real Atlanta: 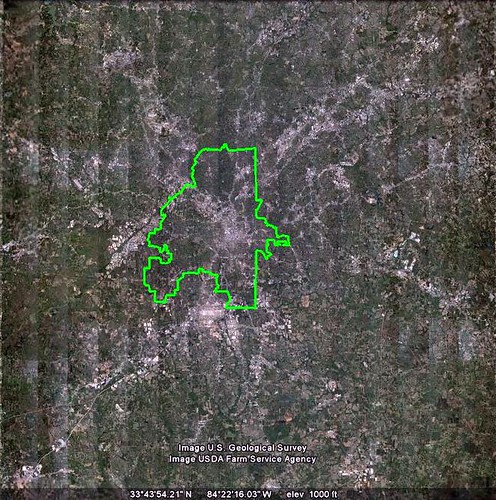 Whatever the statement's origin, the impression generated - that few places are growing - could not be more false.  It misled my friend and it could mislead policy-makers into some very ill-informed decisions.  Managing growth is still highly relevant to any serious policy for sustainability, and I find it shocking that someone could come away from a growth management meeting, of all places, thinking that growth is less relevant than we may have thought.

Here's how the problem occurs:  Merriam-Webster defines a city as "an inhabited place of greater size, population, or importance than a town or village."  That's the way most of us use the word, most of the time.  But Merriam-Webster also defines a city as "a usually large or important municipality in the United States governed under a charter granted by the state."  Two different things:  using the first definition, one might say that "Atlanta" is a sprawling metropolis and powerful economic engine with a population of 5.4 million people; but, using the second, Atlanta becomes a much smaller area confined within an artificially drawn boundary containing only some 540,000 residents.

The smaller, jurisdictional Atlanta may mean something to candidates for city office and cartographers, but it has very little to do with economic or environmental reality. Let's zoom in.  On the image below, the bright line shows the city limits of Atlanta.  If there is a meaningful distinction in the real world to be made between the areas inside and outside the "city," it sure eludes me: 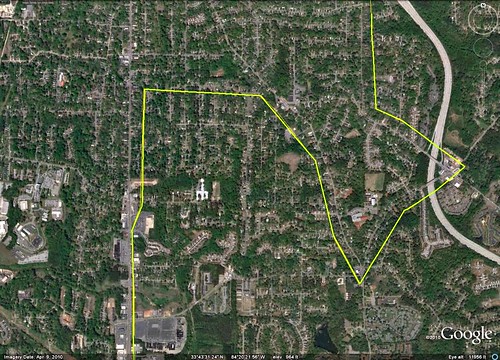 In truth, it has been a long time since economies operated within a jurisdiction's municipal boundaries, if they ever did.  As the Brookings institution puts it, metropolitan regions "are our hubs of research and innovation, our centers of human capital, and our gateways of trade and immigration. They are, in short, the drivers of our economy, and American competitiveness depends on their vitality. "

Or, as put by one Barack Obama during his presidential campaign:

Heck, even in my own life, my wife and I live in Washington, DC, "the city," but she works in suburban Virginia; I rode my bike yesterday and pretty much every weekend from my house into Maryland and back without even noticing where the jurisdictional boundary is.  I'm not exactly sure whether my doctor's office is in DC or Maryland.  I just know it's close to the line, on one side or the other; the street and buildings look exactly the same on both sides of the boundary.  My NRDC colleagues go home in the evenings to a dozen different municipalities. 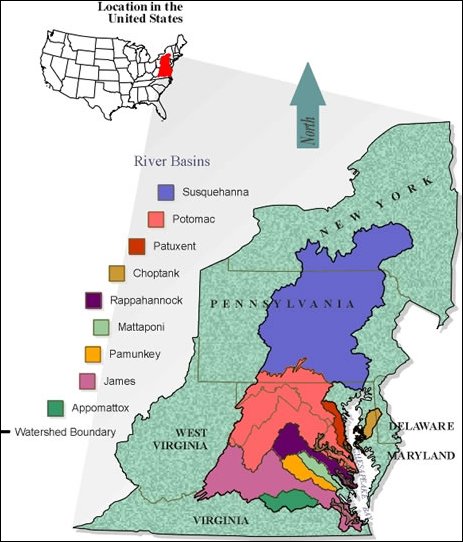 The environment doesn't respect political boundaries, either:  the Potomac and Anacostia Rivers receive runoff from Virginia and Maryland as well as from the jurisdictional city of Washington; the Chesapeake Bay watershed (above) includes parts of seven states.  Regional transportation patterns completely ignore jurisdictional boundaries.  The air in Chicago moves freely around the seven counties and 284 separate communities just within the Illinois part of the region, to say nothing of those in nearby Wisconsin and Indiana.  Very little of the energy consumed within the jurisdictional limits of the city of San Francisco is generated there.  And so on.  Statistics about only what is happening inside city limits very seldom tell us much about what is relevant environmentally.

I would submit that the other scale (besides regions) that matters most is the neighborhood.  Neighborhoods become especially relevant when they are complete, when there are multiple amenities, shops, and conveniences within walking distance or, at worst, a short rather than long drive away.  Neighborhoods are where we eat and sleep and where, if we are lucky, our kids play and go to school; where we shop for food, take our dry cleaning, and maybe grab a bite to eat; where we have chance encounters with others; if we're really lucky, the neighborhood will even have a library and a hardware store. 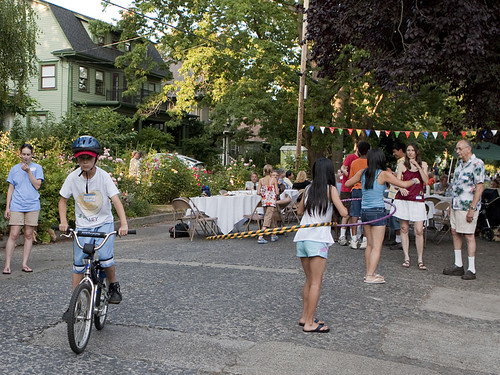 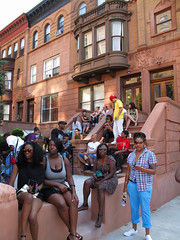 While those of us who live in metro areas – and that's 83 percent of all Americans – zip all around them to visit friends, conduct business, and shop, we're usually going to other neighborhoods when we do.  If the region represents the economic scale of real cities, the neighborhood represents the human scale.

Neighborhoods are also the scale at which land development takes place, where new buildings and facilities are proposed, debated, and constructed.  They are where development decisions actually occur, and where we must pay attention if we want to have influence.  In fact, one of the best ways to reduce regional emissions is to revitalize older neighborhoods, because their relatively central locations reduce transportation emissions and they require little if any increase in runoff-causing impervious surface.  Not that you would ever guess that by the miniscule number of professionals in national environmental organizations who work directly on making it happen.

So where does that leave cities (in the jurisdictional sense of the word)?  They certainly remain very important politically.  In big cities, we can address problems at scale when we lack the legal and regulatory tools to do so regionally.  So that's where we frequently advocate stormwater regulation, building standards, complete streets, zoning reform, and even climate policy.  It's where we can get things accomplished.

But that's partly because cities are the low-hanging fruit of environmental standards and regulation.  We often look to mayors, for example, for leadership on environmental issues, even though their authority is limited to the parts of their regions that are almost always already the most sustainable, on a per capita basis.  It frequently pays off:  urban mayors tend to be more innovative and progressive than their suburban counterparts. 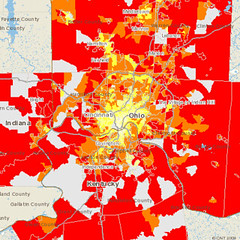 But, when we focus inside the city limits instead of on the region, we're missing most of the problem, and we shouldn't pretend otherwise.  Stormwater runoff per capita is much worse in suburban sprawl, as are emissions of all sorts (CO2 per capita from transportation, left).

One can even make the case that we should be going easier on cities than on sprawling places:  to paraphrase David Owen, why put skinny people on diets?  My personal view is that our environmental framework absolutely should be tougher on sprawling places than urban ones, but that urban ones should also do their fair share to heal our ecosystems, through appropriate standards, safeguards and mitigation.  Unfortunately, I think we remain relatively less attentive to the suburbs, largely because our crazy patchwork of municipalities makes them legally so diffuse and with very rare exceptions there simply is no regional authority to address them as a group.  This can sometimes lead to perverse results, where the most inherently sustainable places become subject to the toughest regulation.

Similarly, when we throw statistics around about "cities" that are limited to a fraction of a place's actual developed area and population, we're frequently being arbitrary and missing the economic and environmental points that matter most.  To return to the "shrinking cities" phenomenon, if your area's economy is in general decline leading to regional as well as central city population loss, that's one thing, leading to one set of appropriate responses; but, if regional centers are hollowing out while the economy remains viable enough to support continued sprawl on the fringe, that's quite another – and one that must be addressed by looking outside the city's jurisdictional borders as well as within.  Failure to do so is, in my opinion, simply irresponsible.  But a statistic only about the jurisdictional central city won't tell you which of the two differing circumstances is actually occurring.

Finally, and deviating slightly from topic, a personal beef:  there is also another way in which these otherwise artificial jurisdictional lines matter.  Tomorrow, most of you will have the opportunity to cast a vote for a Congressperson and perhaps a Senator.  As a resident within the city limits of Washington, I'm allowed to do neither.