I wrote in May about a report by Richard Florida that city crime had dropped to its lowest rate in 40 years.   And now there's more:  last week, Florida wrote another intriguing analysis of recent crime data on theatlantic.com.  Looking inside the numbers and at recent research, he shatters a number of popular myths:  that crime is higher when economic times are hardest; that big cities and minority populations are incubators of crime; that immigration breeds crime. 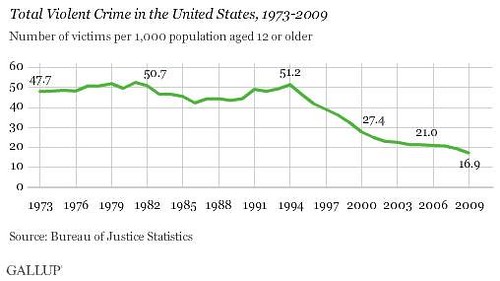 None of these is supported by recent facts, according to Florida.  Here's some of his latest report:

"Almost three years into the worst economic downturn since the Great Depression, with massive unemployment and pessimism rife, America's crime rates are falling and no one -- not our pundits, policemen, or politicians, our professors or city planners -- can tell us why. As I wrote about here, there were 5.5 percent fewer murders, forcible rapes, robberies and aggravated assaults reported in 2010 than in 2009, according to the most recent edition of the FBI's Uniform Crime Report; property crimes fell by 2.8 percent over the same period and reported arsons dropped by 8.3 percent.

"And the drop was steepest in America's biggest cities -- which are still popularly believed to be cauldrons of criminality. 'While cities and suburbs alike are much safer today than in 1990,' notes a recent report by the Brookings Institution, 'central cities -- the big cities that make up the hubs of the 100 largest metro areas- -benefitted the most from declining crime rates. Among suburban communities, older higher-density suburbs saw crime drop at a faster pace than newer, lower-density emerging and exurban communities on the metropolitan fringe.'"

Florida notes that the Brookings report also found that the association between crime and the proportion of the community population that is black, Hispanic, poor, or foreign-born has diminished considerably over time. 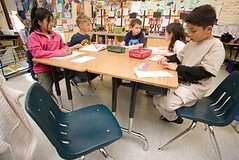 All very encouraging, especially for unabashed urbanists such as myself.  But the most intriguing part of Florida's article concerns diversity:

"[T]he key factor [related to decreasing crime], as it turns out, lies in the growing racial, ethnic, and demographic diversity of our cities and metro areas. Our analysis found that the Hispanic share of the population is negatively associated with urban crime. Crime also fell as the percentage of the population that is non-white and the percentage that is gay increased. And of all the variables in our analysis, the one that is most consistently negatively associated with crime is a place's percentage of foreign-born residents. Not only did we find a negative correlation (-.36) between foreign-born share and crime in general, the pattern held across all of the many, various types of crime - from murder and arson to burglary and car theft."