Wildlife needs to move for many reasons which were discussed in Ecology Lesson: Population Movements. There are many barriers in the urban landscape that prevent or make movement difficult for wildlife. Among the many barriers are roads including small streets to major highways, development such as shopping centers or subdivisions, railroad lines, powerline corridors, canals, dams and non wildlife-friendly landscapes such as agriculture, golf courses or cemeteries. 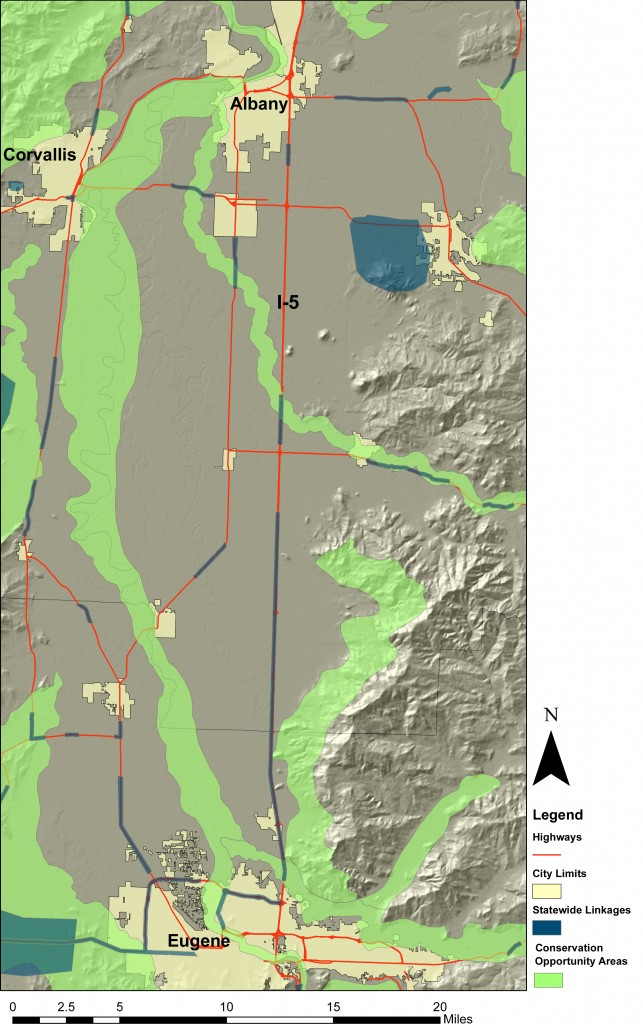 "???Habitat fragmentation is a dynamic process that has three main components: an overall loss of habitat in the landscape, reduction in the size of remaining blocks, and increased isolation by new forms of land use." – Linkages In The Landscape

There are many impacts on wildlife when habitat is fragmented. Movement is much more difficult, impossible and even potentially fatal for wildlife crossing barriers between habitat patches. When habitat is fragmented, populations can also become small and lose their genetic diversity and in some cases can become extinct in patches. Additionally, smaller habitat patches support fewer species, both in number of types of species and individuals of each species, which results in a lower diversity. By creating more edges from the fragmented patches, species are more susceptible to predators as well as house pets which prowl edges. Smaller populations are also more at-risk from natural disasters such as flooding and fire. A fire may reduce a population of a small patch entirely or it may destroy all the habitat in a patch and leave the resident wildlife with nowhere to go.

Barriers make a mosaic of the landscape creating patches, some as large as a forest, some as small as a traffic circle. Patches vary in size and as a result, vary in wildlife use. Large patches can be habitat for a variety of wildlife while small patches close together can act as stepping stones in the movement of some species.

Edges are the outer portion of patches and are physically different than the interior of the patch. They can have varying structural diversity, for example one edge may be very abrupt transitioning from meadow to forest, while another edge may transition more gradually from meadow to shrubs to smaller trees and then to the forest. They can also have varying shapes which effect the habitat diversity. An edge with a wave pattern that creates 'U' shapes will have a greater diversity than a straight edge.

A series of patches close together offer more diversity for wildlife as opposed to an isolated patch. Species may leave one patch for another for a variety of reason such as a depletion of food, or young looking to set up their own territory.

Corridors connect patches together and can be a wide variety of sizes, widths, compositions and structures. Some can be small such as a hedgerow and some may be many miles wide and hundreds of miles long. Some cities historically planned linkages although, like the case of Seattle, the original Olmsted plan was never fully realized. However, in Boston, the Emerald Necklace, another Olmsted plan, was realized and is still in place today and is an important park.

Wildlife moves through corridors or linkages in a variety of ways. They may simply move from one patch, through the corridor to another patch. Others however may stay in the corridor for some period of time. Some species may stop to forage and stay only a matter of hours, while migrating birds may stopover for several days. Some species may even become residents of the corridor itself and spend most of their time inside of it.

Many species of wildlife will use corridors including birds, small mammals, amphibians and reptiles, insects and large mammals. Having focal species is important and essential for habitat planning and corridors are no exception. The Forks in the Road (PDF) authors argue for having multiple focal species, not only one specific species or even one type such as large carnivores. Instead they recommend selecting an umbrella species that collectively serves for several native species as well as ecological processes.

GIS is a planners best friend and an excellent way to model, calculate and plan corridors and there are many excellent tools available to help. However, depending upon the state or local municipality, the data sets available may vary. Some of the landscape components to consider and analyze include the many things that wildlife requires for their life-cycle and daily needs such as territory size, home range size, shelter, food, nest, den or breeding sites as well as aspects that may negatively impact the wildlife such as human disturbance or risk of invasive species.

Corridor size is a tricky subject because of the many internal and external factors. A narrow path will likely be less successful than a wide corridor, especially when placed in an inappropriate setting, and is also more susceptible to edge predators, noise disturbance, light pollution, predators and invasive species. Larger corridors are often better, but there are many constraints such as cost or existing barriers. Multiple, interweaving strands may also be an option when faced with these constraints. There are many recommendations for corridor width, but it really comes down to the focal species. Each needs to be taken into consideration and studied. If one species is territorial, a larger corridor width may be necessary. Additionally, each species will have different requirements of not only the size, but the habitat inside the corridor. GIS can help rank all of these pieces and there are many excellent documents and papers detailing planning and maintaining corridors. See the list below of recommended readings.

Where a continuous corridor is not an option, using the stepping stone approach may aid in the movement of some wildlife species. There are also existing elements in the landscape that could be modified and and used for travel corridors such as rivers and streams. Many waterways run through cities and towns and could serve as a foundation for a travel corridor with some amount of modification. Powerline corridors are another existing structure that could be built on as a travel corridor for certain species of wildlife. Even streets with a large tree canopy have the potential of a movement corridor for aerial species. The corridors along railways are yet one more example of the potential use for wildlife of one of our unused spaces.

There is also a human advantage to planning corridors in urban and suburban settings. They add green space to the city and could create a highly sought after residential edge and serve as stormwater management as well. They also connect neighborhoods with nature by offering space for wildlife to be seen as well as opportunities for stewardship.

Corridors are not for the movement of wildlife only, a recent study shows that plants also use and benefit from corridors. Researchers in South Carolina found that over time there was greater plant diversity in patches that were connected by corridors. Many plants also need corridors to travel and disperse just like wildlife, and is in fact connected with wildlife as many species are distributors of plant seeds.

But do they work? There hasn't been a lot of research on the effectiveness of corridors, but some studies are starting to give hints. A study from 2008 found that planners and designers need to think more naturally because corridors that were too symmetrical were not as effective as corridors with some asymmetry and irregularities. An older study from 1999 found that corridors were effective, at least for certain butterfly species, while a study in 2008 found that the legally required minimum sized corridors in the Amazon were much too narrow.

The next post in the series will focus on road ecology and wildlife crossings.

Further Reading:: There are many excellent and very detailed papers and books about this topic for designers and planners to explore. This has been only an overview of the topic, visit the websites below or read the books listed for much more information on the ecology of corridors as well as detailed design and planning.