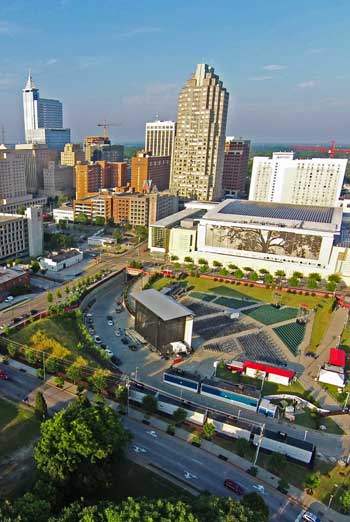 "The conscious remolding of the large-scale physical environmental imageability is a new one. We can now make completely new landscapes in a brief time…Designers are already at grips with the question of how to form the total scene so that it is easy for the human observer to identify its parts and to structure the whole." – Kevin Lynch, Image of the City, 1959.

The Federal Aviation Administration (FAA) recently released long-awaited guidelines for commercial Unmanned Aerial Vehicle (UAV) or drones. Despite many skeptics' earlier expectations of stringent laws that would essentially ground the drone industry in the United States, these proposed regulations, which include height restrictions and licensing requirements, are pragmatic and will undoubtedly lead to growth and innovation. The announcement has unleashed a wave of predictions about the future of the technology, which has already proven valuable in agriculture, environmental conservation, retail, 3-D surveying, search-and-rescue, and law enforcement. It's clear drones will soon become ubiquitous. As critical as drones will become to contemporary life, there has been little discussion about their potential to impact on landscape architecture and urban planning.

These small but complex machines will increasingly become a vital part of the landscape architect and planner's toolkit; they will re-shape the "imageability" of our cities, enabling a higher level of legibility in visual communication. Much of this will be accomplished by the most familiar tool carried by civilian drones: the camera. Aerial imagery is, of course, nothing new. Innovative minds invented camera-equipped kites and balloons as far back as the late 1800s. Manned aircraft have used strategic aerial photography since the first World War, and satellites have been capturing views of Earth and beyond since the 1940s. However, the recent introduction of widespread UAV technology is important to landscape architects because it provides increased accessibility and versatility. While the technology was nearly unattainable a few years ago, anyone can now purchase a ready-to-fly, GPS-stabilized, camera-equipped drone for the price of a cheap TV, effectively leveling the playing field in aerial imagery. Furthermore, the dexterity of the aircraft allows for a nearly infinite number of angles, scales, and elevations, all in real time, often capturing video or still-imagery that has been previously elusive.

Tinkerers, DIYers, and hobbyists have already obtained stunning footage that displays the engaging power of the technology. Drones can be seen cruising above the tree canopy of Manhattan's streets, surveying the urban tundra of snowy Chicago, and even unearthing the beauty of Chernobyl's decay. The first New York City Drone Film Festival, sponsored by NBC, displayed a range of spectacular entries to a mass audience. The United Arab Emirates (UAE)-based Drones for Good competition recently featured many innovative uses for drones that may soon benefit the environmental and urban planning sectors.

UAV technology enables landscape architects and planners to examine the existing social and environmental conditions of sites. We can document accurate circulation through transit corridors and shifting urban and demographic patterns, as well as topographical and hydrologic changes and environmental degradation.

Perhaps the most powerful use of the technology will be as a tool for both city and community governments and design and planning firms to aid in the public participation process. Used in conjunction with more traditional forms of media for community engagement, UAV imagery can help bridge the gap between two-dimensional, temporally-devoid satellite imagery and the more prosaic ground-based conventional camera.

A simple 5-minute fly-over video of an urban neighborhood at multiple elevations (displayed through an analog or digital forum), may reveal both empirical and experiential observations – the diversity of housing types, the voids of underutilized open space, the buzz of traffic patterns, the flow of natural systems, the nodes of community activity, or the light cast over the neighborhood at sunset.

Conceptual overlays of proposed conditions or site analysis can then be integrated into the three-dimensional aerial video, adding a new level of spatial and temporal dynamics to the design process. Drones equipped with LiDAR (Light Detection and Ranging) scanners are producing three-dimensional representations of natural and built environments with amazing accuracy, while software such as Autodesk's 123D Catch allows drone imagery to be stitched together to create a photo-realistic 3D model.

These techniques will make complex problems more understandable to the public and thus evoke more comprehensive feedback. This will, as Kevin Lynch stated more than a half-century ago, help "form the total scene, so that it's easy for the human observer to identify its parts and structure the whole."

Landscape architects and urban planners should applaud the new FAA regulations. They are a milestone in encouraging the innovation of a tool that will lead to a more democratic era of public participation in landscape and urban design.