A Glimpse Inside the "Undercity" of a Mumbai Slum 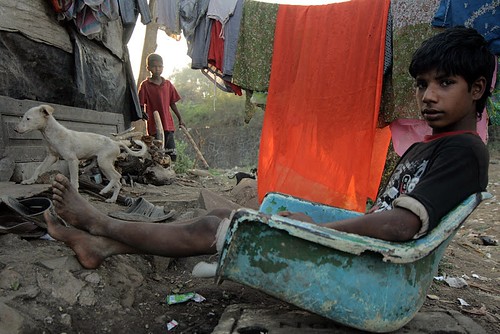 Mumbai is a study in contrasts.  Once known to English speakers as Bombay, the city is India's largest, with a population of some 12.5 million people (metro area 20.5 million).  It has the highest GDP of any city in South, West, or Central Asia, with a per capita income three times India's national average and a range of industry leaders in entertainment (including the Bollywood film industry), finance, luxury goods, information technology, and textiles, among others.  It is the third most expensive office market in the world and has been listed first by Forbes in the average wealth of its many billionaires.

Yet Mumbai also suffers from widespread poverty and unemployment, poor public health, and low educational standards for a large portion of its population, well over a million of whom live in makeshift slums.  Dharavi, the largest of these, houses over 800,000 people in an area less than a square mile, making it one of the most densely populated places on Earth. 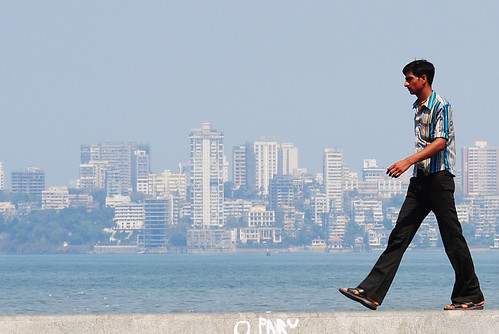 Another of these makeshift slums, Annawadi, houses three thousand people on a small patch of land by Mumbai's international airport.  It is the subject of a remarkable book, Behind the Beautiful Forevers, by Pulitzer-winning author Katherine Boo, who spent over three years getting to know its residents and crafting their story:

"Every morning, thousands of waste-pickers fanned out across the airport area in search of vendible excess -- a few pounds of the eight thousand tons of garbage that Mumbai was extruding daily.  These scavengers darted after crumpled cigarette packs tossed from cars with tinted windows.  They dredged sewers and raided dumpsters for empty bottles of water and beer.  Each evening, they returned down the slum road with gunny sacks of garbage on their backs, like a procession of broken-toothed, profit-minded Santas . . .

"Home [might be] a divider made of made of aluminum [with] a wall of reject bricks, which established [the] home as the sturdiest dwelling in the row.  [Some] Neighbors' huts [were] held together by duct tape and rope . . . Annawadi itself was nothing special, in the context of the slums of Mumbai.  Every house was off-kilter, so less off-kilter looked like straight.  Sewage and sickness looked like life." 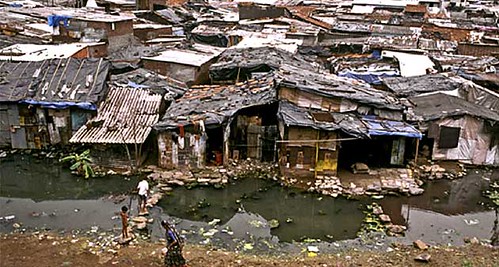 Annawadi is next to a sewage lake, yet surrounded by luxury hotels serving the airport.  According to Boo, she was able to count only six of its residents as employed in the traditional sense, the rest dependent on the informal economy that characterizes "undercities," as Boo calls them, so often found in the developing world.

If you research Annawadi by name, you won't find much other than Boo's account and various reviews of her book, which won a National Book Award.  But her prose – what I've been able to read so far – is spellbinding, presenting the essential humanity beneath the superficial squalor.  She focuses on certain key residents, whom she follows around.  A kid named Abdul, for example, sees financial hope in his scavenging among the discarded trash of the wealthy; a teenage girl hopes to become Annawadi's first college graduate.

One of the accounts I did find was that of a Norwegian woman who visited Annawadi to observe an English class being taught by her cousin, an expatriot in Mumbai.  Her description of the students' dignity is wonderful:

"[T]his is where I came face to face with my own prejudices.  This crowded room, filled with slumdwelling children, smelt of – nothing.  And the children?  In neat rows, and equally neat themselves.  None of them with tattered, faded clothes.  And none of them even slightly on the smelly side.  The girls in light-coloured saris.  Their hair either braided or pinned away from their faces with hair clips.  Some had fresh flowers pinned to their hair.  And the boys?  Their shirts looked like they had been ironed.  My knee-length tunic (kurta), on the other hand, was already soaked at the throat and armpits.

For the next few hours, I sat mostly in quiet joy.  In front, next to a white blackboard, Eli [the teacher] explained, laughed and praised.  The children beamed.  Arms continuously shot high in the air.  'Miss! Miss!'  Every now and then, one of the four girls squeezed up against me would adjust an arm or a leg to get even closer.  Behind me, a ten-year old girl occasionally nudged her five years younger sister.  For some reason, this reminded me of a story Eli once told.  When asked what they did after school, the children replied that they helped their grandparents.  'We fetch them water and medicine, they said.  Imagine, that is what a ten-year old does here; fetch his grandmother water.'"

What a sympathetic and appealing scene. 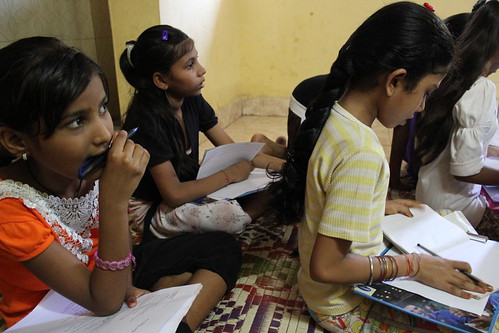 Boo also presents her characters with empathy, and with clarity, too.  She was known as "Katrina didi" among the kids.

But all is decidedly not well in Annawandi, and her book also presents genuine tragedy and horror among the lives of people who, literally, have nowhere to go.  The contrast of the humanity with the reality can be heartbreaking.

Another account of the settlement has been written by Matt Daniels, who read Behind the Beautiful Forevers and decided to do some fact-checking for the online publication Mumbai Boss.  The author concludes that Boo did not exaggerate the slum's inherent desperation:

"I laid eyes on Annawadi, and was relieved instantly of any doubt that she'd told it straight.  A ramshackle collection of decaying wooden scraps, like a barricade out of revolutionary Paris, shielded it from the road.  There was no brick path at the entrance, only mud laid with fragments of flagstone.  While in other slums kids may have been small for their age, here children were visibly stunted.  Even the dogs of Annawadi seemed defeated, their teats hanging to the ground."

Even the slums of Mumbai, it seems, present a study in contrasts.

What will become of the Annawadians when, as the video below suggests, their community is demolished to make way for development?  The airport owns the land. 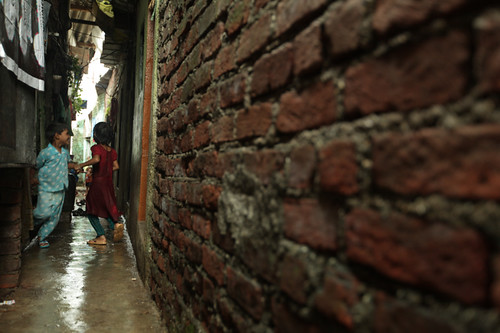 In the three or four days I've spent rummaging around Boo's book and reports on the web, I find myself at a considerable loss.  The things I and my friends and colleagues usually concern ourselves with – pollution, climate, resource consumption, the walkability of cities and taming the automobile, so important in the US – seem so abstract, so less immediate than the all-too-tangible challenges presented by daily life in places like Annawadi.  I feel like I should have a policy response all dialed up and ready to advocate – that's what we advocates do – but that would just be pretending at this point.  I feel moved, but clueless.

The title, by the way, comes from an advertisement near the entrance to the slum, proclaiming a brand of Italianate tiles to be "beautiful forever."

Here's a short video about Annawadi:

Visit the website of Behind the Beautiful Forevers here.  (One warning:  I bought and have been reading the "enhanced Kindle edition," which is said to contain embedded video content.  I suppose it may, but the content won't play on my Kindle, my PC, or my laptop.  If you are inclined toward an ebook, save yourself a couple of bucks and get the regular edition instead.)

Kaid Benfield writes about community, development, and the environment on Switchboard and in other national media.  Kaid's latest book is People Habitat: 25 Ways to Think About Greener, Healthier Cities.