In the circles I travel, there is a lot of discussion about the importance of streets and their design to our communities. In short, for many decades there has been too little attention paid to the effect of streets on pedestrians, bicyclists, transit users, merchants and their customers, on children. Instead, the overwhelming thrust of thinking about these critically important public spaces has been placed upon their role as conveyances for motor vehicles.

While enabling cars to move around is not unimportant, I applaud those leaders who are also directing our attention – and the attention of public departments of transportation – back to people, to streets as not just conveyances but also destinations, places to linger on foot, as places of beauty, as places whose look and feel greatly define what it means to be in a particular community, why one city differs from another. Last year's critically acclaimed book Street Design, written by my friends Victor Dover and John Massengale, has been a major contribution to this effort, as has Jeff Speck's Walkable City. The "complete streets" movement has been an enormous influence in making roadway designers aware of the needs of pedestrians and bicyclists when building or updating street infrastructure.

We are finally making some progress in these efforts, though we still have a long way to go.

But I think there is another, critically important way in which we need to consider and improve our streets: we need to give much more thought to their impact on natural ecosystems. In the twenty-first century, our most important public spaces need to be not only complete, hospitable and beautiful but also green in an ecological sense. They need to be places of resilience where nature is respected. 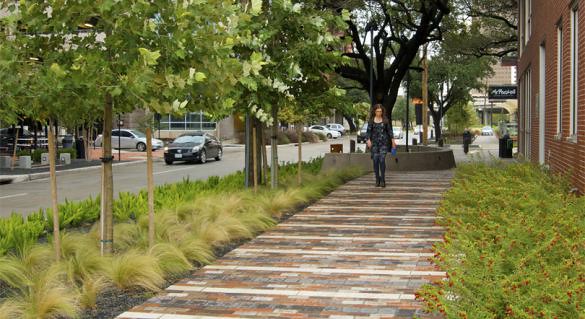 And, on this front, the thinking has barely begun. The most important of several issues is this: streets don't just convey cars and people; they also convey polluted runoff, passing it along to sewer systems and, eventually, receiving waterways. Among the contaminants are heavy metals; oil and grease; sediment; pesticides, herbicides, and fertilizers from adjacent properties; and household waste.

The biggest problem in this noxious process is that most street and sidewalk surfaces are impervious, by definition creating runoff during precipitation events rather than allowing rainwater and snowmelt to be absorbed into the soil before they pick up contaminants and send them downstream. In older cities where stormwater and wastewater sewer systems are combined, heavy rainfall events create "combined sewer overflows," something you don't even want to think about.

While other surfaces – rooftops and parking lots, for example – also contribute impervious surface to watersheds, in downtowns and highly urbanized areas – places where waterways are most likely to suffer from pollution -- streets lead the way. The city of Philadelphia estimates that 38 percent of the impervious surface within its borders comes from within street rights-of-way. Moreover, even where runoff originates elsewhere, it often collects and flows in city street systems. The federal EPA estimates that more than 10 trillion gallons of untreated urban and suburban stormwater runoff makes its way into our surface waters each year, degrading recreation, destroying fish habitat, and altering stream ecology and hydrology. 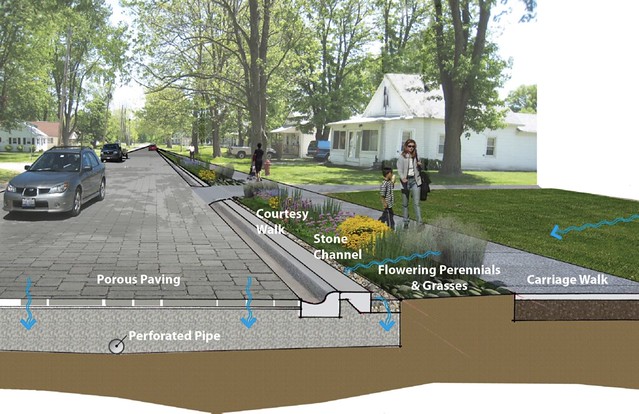 The good news is that there is an answer, and it can make our communities more beautiful as well as kinder to nature: strategically designed landscaping and paving materials that capture and filter stormwater before it becomes polluted runoff. In urban rights-of-way, such green stormwater infrastructure can include tree planting, rain gardens, swales, permeable pavement, and more. (Several illustrations accompany this article.)

These practices not only control pollution but also help cool urban heat islands (reducing the need for energy-sapping air conditioning), mitigate flooding, recharge groundwater, beautify neighborhoods, and enhance nearby property values. In the best cases, they are integrated with complete streets policies and practices so that streets can become "greener" in multiple ways. They also save scarce fiscal resources by obviating additional increments of generally much more expensive "gray infrastructure" in the form of concrete pipes and sewer systems.

While the practice of greening our streets is in its infancy, policies and projects are emerging. By and large, I love them. 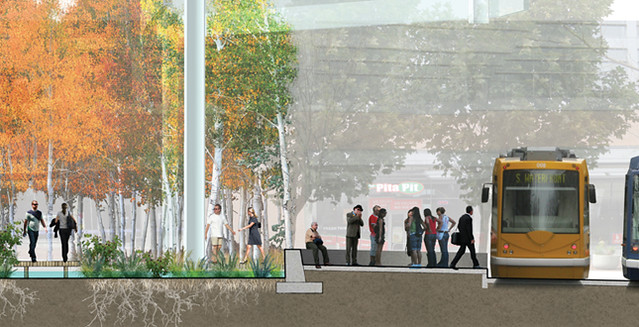 In Portland, Oregon, for example, the city has adopted a green streets policy to promote and incorporate the use of green street facilities in public and private development. A number of on-the-ground projects have emerged as a result, including the ambitious, downtown Southwest Montgomery Green Street that connects Portland's West Hills along a nine-block corridor to the Willamette River. The project is being designed to enhance the pedestrian experience as well as manage stormwater, as this 2012 award citation from the American Society of Landscape Architects highlights:

"The SW Montgomery Green Street Plan demonstrates how, in even the most ultra-urban conditions, downtown streets can be planned and retrofitted not only to fully manage stormwater runoff but to also create, integrate, and preserve vibrant pedestrian spaces. The landscape architect was asked to take the primary role creating a highly integrated and pedestrian-oriented urban streetscape vision that incorporates a variety of green infrastructure strategies along the corridor including stormwater swales, planters, green walls, green roofs, artful stormwater conveyance, and a definitive 'curbless' street design."

The project, which employs several of the techniques mentioned above and is being implemented in phases, is being designed to treat 1.8 million gallons of stormwater runoff. Pedestrians are given priority throughout the corridor. (Lots of details may be found in this report, prepared by the project's lead consultants Nevue Ngan Associates.) 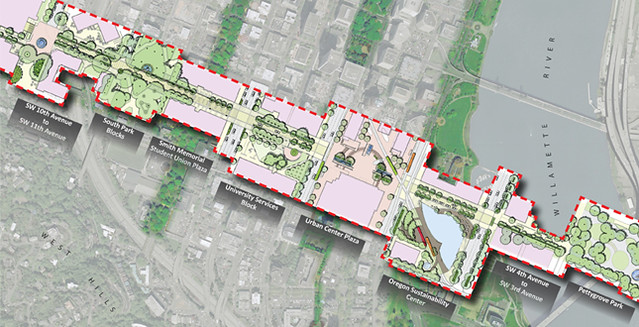 The Philadelphia Water Department worked closely with the Mayor's Office of Transportation and Utilities, the Streets Department, Philadelphia Parks and Recreation, and other public utilities, partners, and agencies to develop templates that are flexible enough to be applied in a variety of urban street conditions. According to its website, the Green Streets Design Manual "outlines what types of green stormwater infrastructure practices are appropriate on various street typologies, provides standardized design details, and lays out the necessary design review and construction inspection processes. Moving forward, design professionals, engineers, planners, and developers can utilize the approved design standards and procedures therein to expedite green street development in Philadelphia." 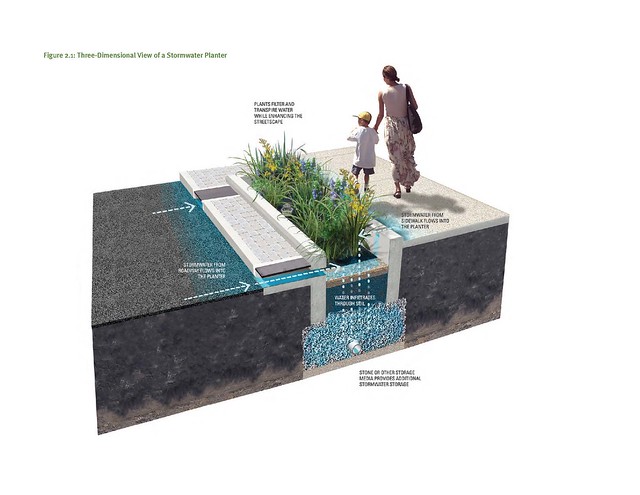 A great summary introduction to the Philadelphia Manual and the objectives it is designed to serve is posted on the Greater Places website established and maintained by longtime city-practices leader Lisa Engstrom Nisenson. (I highly recommend the Greater Places site in general as an aggregator of readily accessible information about best practices in cities around the world.) A list of green-streets projects currently under way in Philadelphia can be found on the Water Department's website.

Cities are important to nature, because compact development and living patterns help preserve watersheds and natural ecosystems beyond city borders. Without compact cities, the countryside becomes fragmented in ways that are antithetical to the functioning of natural systems (as well as to scenic beauty), which is precisely why suburban sprawl has been such a disaster for our landscape.

But nature is also important to cities, because it makes cities more beautiful, functional, and hospitable. A growing plethora of research shows without question that our mental and physical health improves in the presence of urban nature. The challenge in cities, though, is to bring nature into the urban environment in ways that support rather than displace urbanity. I can think of few ways that do this more seamlessly than greening our streets.

Kaid Benfield writes about community, development, and the environment on Huffington Post and in other national media. Kaid's latest book is People Habitat: 25 Ways to Think About Greener, Healthier Cities.