Is it Time to Change the Narrative About Detroit? 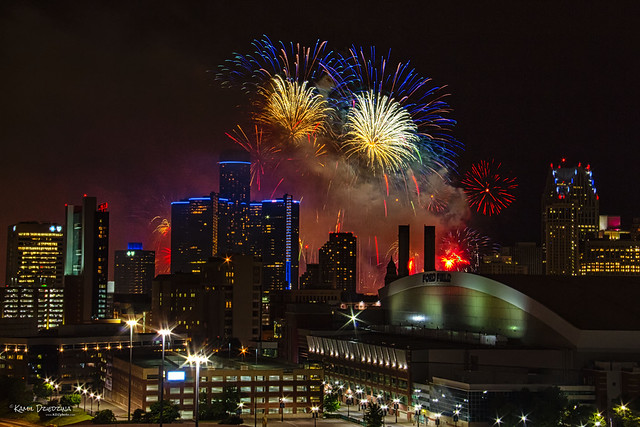 However improbable it might have seemed twenty, five, or even two years ago, Detroit could well be on the verge of a major turnaround that could make it one of the biggest success stories in urban America over the next decade.  Yes, that goes against conventional wisdom:  The standard narrative for Detroit has been about a bankrupt, vacant, decaying, post-industrial wasteland; an environmental, social and economic disaster.  Detroit has been the quintessential "shrinking city," the poster child for everything that has gone wrong with the post-industrial Midwest.

(I never did buy the "shrinking" part, by the way.  What really happened was a hollowing out, as central-city residents fled for the suburbs.  The population of metropolitan Detroit has actually been close to stable over the past few decades due to suburban growth offsetting inner city losses.  But there has been a lot of truth to the rest of the story.)

Note that I said that Detroit could turn out to be a big success story, not that it necessarily will.  But why do I think Detroit's future may be brighter than conventional wisdom suggests?  In part, because of my friend Tina.  We had lunch a few weeks ago, and Tina was full of enthusiasm for Detroit.  She's been spending more and more time there, and can't wait to move there for real to take advantage of all the positive energy she finds in the Motor City.  Entrepreneurs, creative types, revitalizing neighborhoods; a plethora of activity and possibility.  She was bubbling over with excitement.

I took note, because Tina is the kind of person you want to be excited about your city.  She's bright, accomplished, with-it, super-attractive, enthusiastic, hard-working, insightful and, above all, fun to be around.  She's had a stellar, decades-long career at the intersection of environmental protection and placemaking, and I could not think more highly of her.  Tina isn't the kind of person to go all ga-ga over a loser. 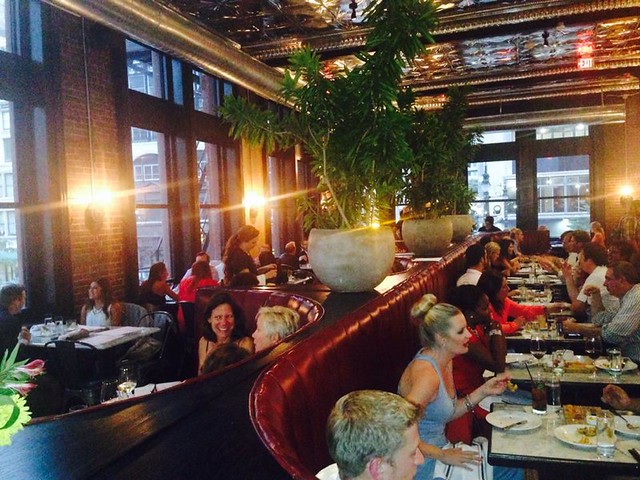 Tina inspired me to pay a bit more attention, and I like what I've discovered.  Population in the central city actually increased from 2012 to 2013, for example, according to the Southeastern Michigan Council of Governments.  This is a big deal for Detroit, whose population had been on an unbroken, precipitous decline from the 1950s through 2010.  Housing prices are up this year, too, and many crime-rate indicators are trending down.

That's all good news, of course, but perhaps even more telling is that the downtown business climate appears to be showing new signs of life.  Louis Aguilar wrote last month in The Detroit News that commercial vacancies are declining sharply:  as recently as 2009, there were 48 large (five stories or taller) empty buildings downtown.  (Wow.)  But, today, the number is down to 13.  Eleven of the once-empty 48 are now occupied, and another 20 are being renovated or have been bought with plans for redevelopment.  (Four have been demolished.)

Aguilar understandably urges caution with respect to drawing major conclusions from the positive trend, but there's little doubt that at least something is going on:

"Now they own more than 60 properties, totaling more than 9 million square feet. Bedrock alone has renovated four of the once-empty buildings and is doing major fix-ups to another five." 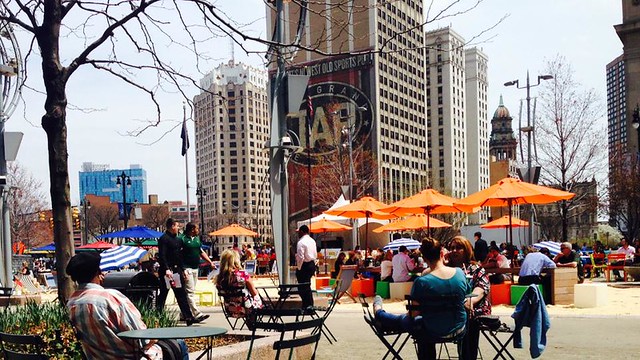 No one predicted such a quick turnaround, writes Aguilar.  He continues:

"The trend goes much further than Gilbert's Bedrock. Many small investors are involved. So are longtime Detroit corporations such as General Motors, Blue Cross/Blue Shield and DTE Energy. The latter companies may have not filled empty buildings, but they boosted their investments and in some cases relocated staff downtown.

"Some of the still-empty buildings are on the verge of new life, such as the $82.5 million renovation of the stately David Whitney Building into a boutique hotel and high-end rental apartments, which are two red-hot sectors downtown."

The vacancy rate in downtown Detroit's most prized office buildings fell to 11.5 percent last year from 26 percent three years ago, according to a report by Jones Lang LaSalle, a commercial real estate company.

Speaking of investment, The Washington Post's Jim Tankersley reports that financial giant JP Morgan is investing $100 million to assist the revitalization of Detroit's near-downtown neighborhoods.  Of the total, half will go to a pair of community lending groups to support the redevelopment of a ring of neighborhoods "teetering between knock-it-down blight and move-here-now nice."  The rest will be split among renovation of abandoned homes, jobs training, and investment in small businesses and city infrastructure (including assistance to a streetcar). 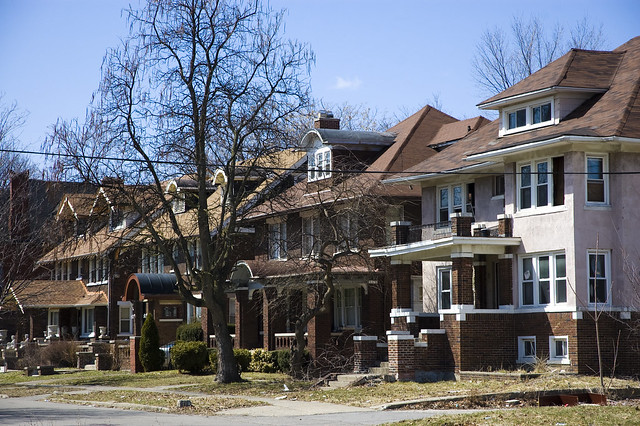 The idea is "to bend [the city's] path toward greatness," writes Tankersley.  He elaborates on Detroit's potential:

"Its metropolitan area remains the nation's 14th-largest economy, a bona fide major-league town, albeit one where you can buy a family-size house for $10,000 or less. The downtown is clean and vibrant and draws a young, hip crowd. You can think of Detroit as being like a besieged medieval city, where the knights have abandoned the outer walls and holed up in the central castle tower. Now they hope to win back the courtyards."

If successful, JP Morgan's cash could have a substantial multiplier effect, going to community investment groups who can then recruit hedge funds, banks, and other sources of money to join in the groups' projects.  Investment breeds more investment.  Tankersley reports that JP Morgan has roots in Detroit going back 80 years, employing 3,600 people in Michigan across 300 branches.

At the same time, bank official Aaron Seybert stresses that the money is not a gift.  "We're not a foundation here," Seybert told Tankersley.  "I feel very strongly about this. Community development needs to be sustainable, and we expect a return on our investment."

While at least one writer has sharply criticized JP Morgan's involvement in Detroit, calling it a "sinister ploy" whose real goal is the private control of now-public assets, I personally have a hard time seeing it as anywhere near a net negative.  I doubt the community groups and their clients who will benefit from the investment will give a rat's behind what the bank's motivation is.  This is going to be a boost to a rebounding city.

All this doesn't come close to capturing the breadth of what's going on.  One could probably write an entire book about Detroit's newfound potential, and I suspect someone has.  I'm not going to try to do that here.

But I would be remiss if I didn't at least mention a couple of additional articles I have come across highlighting some of the city's exciting artistic endeavors, which in many cases are explicitly linked with its revitalization.  I've written before, for example, about the amazing, ever-changing Heidelberg Project, in which gifted folk artist Tyree Guyton employs found objects and his neighborhood itself to make powerful, colorful sculpture (see image below). 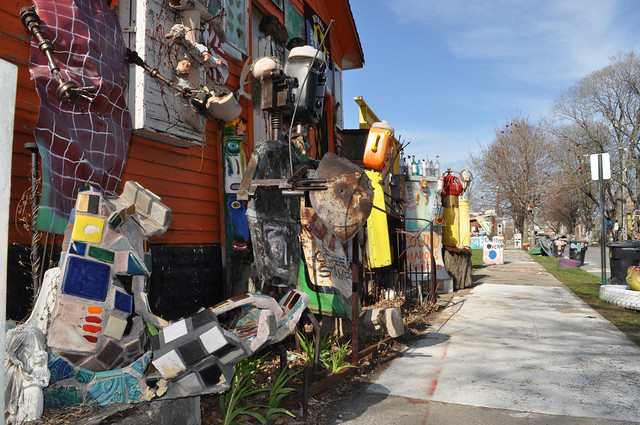 Anna Clark, writing in the Detroit blog Model D, believes that artists such as Guyton typify the unique relationship that Motor City artists have with the city's community and its everyday activities:

"In Detroit, art isn't just something to look at. Neither is it something to consume. Rather, it is an active part of civic life, cultivating community resilience by connecting people and places across the city's 139 square miles. In a city where municipal bankruptcy and deindustrialization has shredded both the public and private sectors, artists and organizations have an unusually large impact—they are literally changing the landscape . . .

"The collective creative impact broadens residents' sense of what is possible for the city, tells the city's story to others around the world, and facilitates imaginative re-thinking about what citizens have to contribute to the place they call home."

I highly recommend Clark's article, which is rich with detail, including with respect to the significant role of philanthropy in supporting the city's renaissance generally and its creative culture in particular.

Immigrants are playing a part, too.  Also writing in Model D, Walter Wasacz describes a bevy of homegrown, arts-based placemaking that is helping revitalize an area of the city informally known as Banglatown, along Detroit's border with Hamtramck, a small, independent city-within-a-city that Detroit completely surrounds:

"A sweeping, largely organic revitalization of Conant [Street] began with Bangladeshi businesses (some of them, like Amar Pizza, have received national media attention). In 2008, a roughly one-mile stretch of Conant from Davison south to Caniff in Hamtramck was given an honorary designation as Bangladesh Avenue. The strip is lively day and night, filled with green grocers, halal butchers, restaurants, and clothing shops. The air on its side streets fills daily with the aromas of curries and other spices.

"The origins of Banglatown are here, but so too are the origins of a growing creative community that blends intentional art and design strategies with organic immigrant residential and commercial redevelopment." 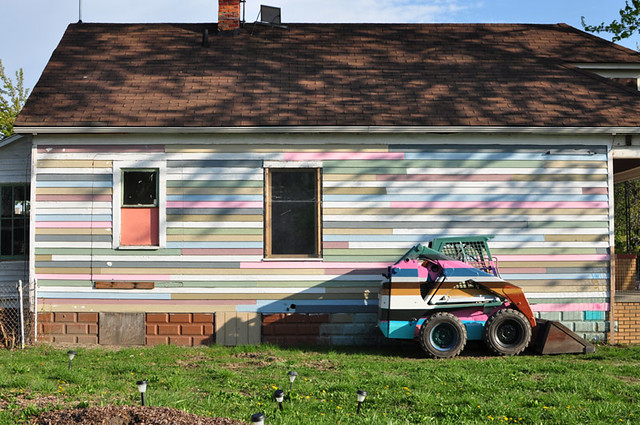 Nearby, for further example, are a number of properties-slash-art-installations that artist Mitch Cope and architect Gina Reichert (collaborating as Design99) have dubbed the Yellow House, the Jar House, the Squash House, the Sound House, the Play House, and the Power House, the one that started them off on placemaking.  The Power House is a former abandoned property now turned into a colorful artistic statement, generating its own electricity through solar collection and illuminated at night by a garden of solar-powered ground lights.  These projects are designed to bring greater visibility and identity to the area, and to attract the attention of residents and others to the art and process of neighborhood-building.

It seems to be working, as former vacant properties are finding new life.  Wasacz continues:

"Nearly six years after [the Power House] launched, a walk through the neighborhood reveals houses being upgraded and landscaping and gardens returning. Families are living there. Children are riding bikes and playing on the sidewalks and in the yards."

Speaking of bikes, Detroit also sports a rapidly developing system of bicycling infrastructure, both on its uncongested city street network and on an extensive system of linked greenways conceived and being constructed under the leadership of the Community Foundation for Southeast Michigan.  On the streets, the city created 80 miles of new striped bike lanes in 2013 alone, nearly doubling the size of the total marked network, according to Jake Lynch in Rails to Trails magazine.

Yes, all this is somewhat anecdotal, a puzzle being solved at best one piece at a time rather than with a grand solution.  Detroit remains a once-proud city whose reality is that it was abandoned by three-fifths of its peak population.  By any measure, it has a long, long way to go.  But I've only scratched the surface of a few projects, and I can't help but be impressed by all the positive activity.  I see hope, and I think my friend Tina may be on to something.