NatGeo surveys countries' transit use: guess who comes in last

Internationally, 25 percent of respondents in the 17-nation survey report using public transportation daily, and 41 percent report using it at least once a week.  Even Canadians are more than twice as likely to report weekly or more transit usage than Americans; Germans are almost five times more likely to use transit at least weekly, and Russians are over ten times more likely: 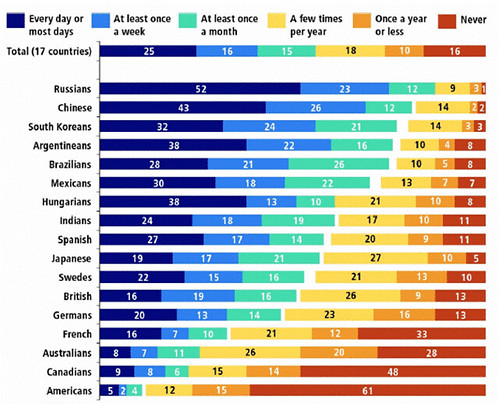 Greendex surveyed over 17,000 consumers for indicia of "progress toward environmentally sustainable consumption."  Parameters measured included "energy use and conservation, transportation choices, food sources, the relative use of green products versus traditional products, attitudes towards the environment and sustainability, and knowledge of environmental issues," according to the report's home page.  You can download the 14-page highlights here and the 296-page full report here.

(The selection of countries surveyed is far from comprehensive and a little arbitrary.  Germany, Spain, France and the UK were surveyed, but not Italy or Switzerland; Argentina and Brazil but not Chile; Sweden but not Denmark; and so on.)

The results were numerically scored, with the developing nations of China, India, and Brazil scoring the best overall, and the US scoring worst.  Personally, I don't put too much weight on the overall rankings, which surely contain a fair amount of subjective judgment, but I do find the responses to particular questions to be telling.  I took a close look at the transportation section. 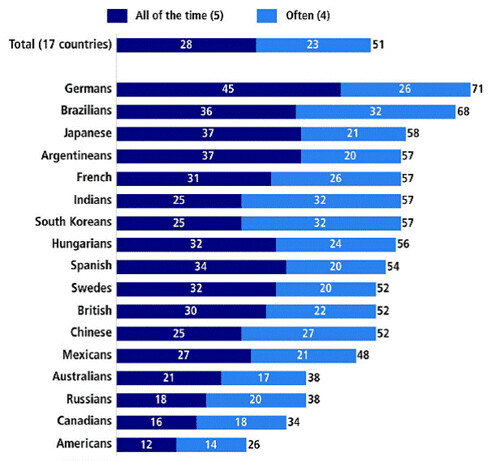 Americans did report a decline in overall travel and in fuel consumption over the last year, because of higher fuel prices.  However, Americans are far more likely to drive SUVs or minivans (33 percent, compared to 13 percent internationally) and far less likely to drive compacts (18 percent; French, Japanese, Germans, and Swedes are all more than two and a half times more likely).  92 percent of Americans own cars, tied with Australians for the highest rate of reported ownership, and Americans were far more likely to report owning two or three cars per household.

Americans surveyed reported that the biggest obstacle to their use of public transportation was lack of availability (55 percent), followed by "takes too long" (40 percent) and infrequent service (30 percent).  Only 18 percent of Americans report that public transportation is easily available to them, a far lower percentage than the international average: 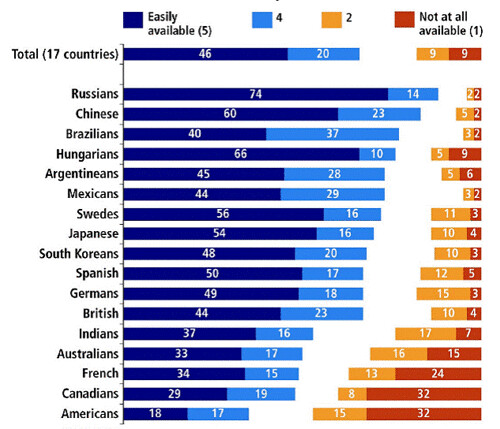 Note that even Canada has a significantly higher portion of respondents reporting public transit to be easily available.

Altogether, the study scored 17 (National Geographic seems fixated on the number 17; call Robert Langdon at once) parameters pertaining to transportation, including these:

Full credit to Elana Schor's post on Streetsblog, where I first learned of this study.