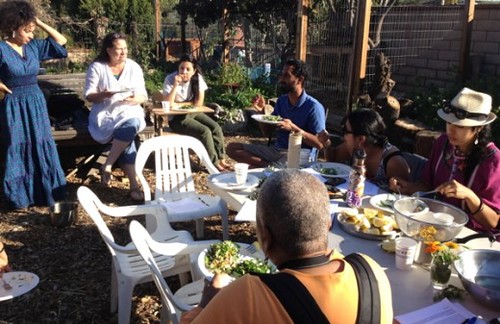 It's no secret, unfortunately, that many American downtowns and neighborhoods were disinvested, some severely, over the past several decades.  The consequences were devastating, as homes and storefronts were abandoned and once-thriving communities became devoid of opportunity and safety for those who remained.

While these issues remain real all across the country, the 21st century promises to be much kinder to cities and older neighborhoods than the second half of the 20th and, as neighborhoods recover, one of the more engaging trends is the role of community-based arts in revitalization.  From the exhibitions of African-American art in Houston's Project Row Houses to the amazing folk sculpture of the Heidelberg Project in Detroit to Candy Chang's amazing Before I Die project that originated in New Orleans and has now spread elsewhere, artists are bringing life and purpose back to forgotten districts.  While there may be some risk that "creative placemaking" could become a passing fad without a lasting legacy, I don't think so:  when it's homegrown, it's real.

I suspect Theaster Gates, the accomplished installation artist and social activist behind the Rebuild Foundation, based in several Midwestern cities, would agree.  Rebuild enlists "teams of artists, architects, developers, educators, community activists, and residents who work together to integrate the arts, apprenticeship trade training, and creative entrepreneurship into a community-driven process of neighborhood transformation."  I learned of the Foundation's work through the grant program of ArtPlace America, which is awarding Rebuild $250,000 to expand its revitalization work in the north St. Louis neighborhood of Hyde Park.

In particular, the organization is transforming a vacant building and adjacent lot into an arts and design-centric space that will host diverse cultural programming developed in partnership with the community.  The site's activities will include the Listening Room project to share archives of African-American music with the neighborhood; a cultural food program; an artist-led forum on neighborhood public space; and an incubator for local craftsmen and artistic entrepreneurs.

Rebuild is one of 54 organizations that today are receiving funding from ArtPlace America to support their work in creative placemaking in communities across the US.  ArtPlace America is awarding a total of $15.2 million to 54 projects using the arts to transform 44 communities. It is also supporting a statewide project in Connecticut.  (I last profiled ArtPlace America's work here.)

The Connecticut program, Create Here Now, looks fantastic.  Administered by the state's Department of Economic and Community Development, the program is helping 20 participating cities and towns repurpose storefronts and other vacant spaces for artists and provide marketing support for participating artists.  The program fosters cooperative partnerships among municipalities, artists, entrepreneurs, and property owners.

Effective last July, Connecticut began incorporating a placemaking strategy into all of the state's existing arts programs to focus outcomes on organizations and collaborations that create jobs and revitalize communities.  Create Here Now has been piloted in Bridgeport, where the program has offered three-month leases to start-ups, rent free, in previously vacant spaces, enabling entrepreneurs to test products and potential neighborhoods in further developing their concepts.  The overall goals are to increase visitors and shoppers to recovering neighborhoods, help change perceptions of neighborhood safety by activating vacant spaces and providing clean, well lit streets, and raise awareness of local talent, innovators and small businesspeople.  ArtPlace America is helping with a $500,000 grant.

A much smaller but highly creative awardee that caught my eye was a project called "Silent Lights" in Brooklyn, intended to create a safer, more inviting pathway for pedestrian commuters traversing what has been a loud, poorly lit and busy underpass linking Red Hook in Brooklyn to its closest subway stop.  Working in partnership with the New York City Department of Transportation, the Artist Build Collaborative will install a series of six colorful pedestrian "gates" that light up sequentially based on the intensity of sound and vibrations from oncoming traffic.

As anyone who has read me before knows, I strongly support anything that helps make urban neighborhoods more welcoming and thriving for current and future residents and visitors.  It not only makes for better communities; it also makes for a healthier environment, because cities with their more centrally located and walkable neighborhoods are far less polluting and consumptive of resources on a per-person basis  than the wasteful pattern of suburban sprawl that has for so long dominated our landscape.  Bringing cities back is inherently green. 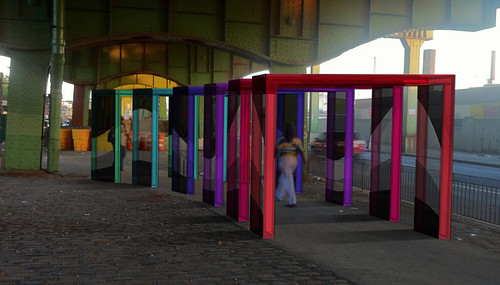 ArtPlace America is a collaboration of national and regional foundations, banks and federal agencies committed to accelerating creative placemaking – putting art at the heart of a portfolio of strategies designed to revitalize communities.  This is the third cycle of grants awards by the collaboration.  With this round, ArtPlace America has awarded a total of $42.1 million in 134 grants to 124 organizations in 79 communities across the country.

ArtPlace America also seeks advice and counsel from close working relationships with various federal agencies, including the National Endowment for the Arts, the Departments of Housing and Urban Development, Health and Human Services, Agriculture, Education, and Transportation, along with leadership from the White House Office of Management and Budget and the Domestic Policy Council.