Smart Cities Will Work If We Put People - Not Technology - First

From 21-23 May, the 19th issue of realCORP - the international conference on urban planning, regional development and the information society - was taking place in Vienna, Austria. The event was focussing on the concept of a smart city and its relevance for contemporary urbanization.

Since almost 20 years the realCORP conferences are an important venue for the intellectual exchange between urban planners in Central Europe and the world. This year the conference's theme was coined Plan it Smart. Clever Solutions for Smart Cities and aimed at looking behind the buzzword 'smart city' as realCORP conference director Manfred Schrenk explains:

"'Smart Cities' has become a widely used term for the implementation of information and communication technologies (ICT) into the built environment, aiming to improve the integration of the physical assets as well as social and environmental capital. Fired by several rankings there seems to be a competition for the title of the 'Smartest City'".

RealCORP 2014 dealth with some critical questions about what Smart Cities are and what importance they have for contemporary urban challenges. So it was discussed what Smart City means in terms of quality of life or if concepts such as sustainability or resilience are part of the currently built Smart Cities.

In fact many participants at realCORP were concerned that the smart city discourse appears to be increasingly dominated by large corporations, all of which have a major interest in supplying cities with their smart technologies ranging from ICT applications to security services. Looking at the numbers and the growth rates in the smart city business, one can also talk about a smart cities gold rush. According to a recent study the global annual smart cities market is expected to grow from USD 654.57 billion in 2014 to USD 1,266.58 billion by 2019. In this context the analysis and city-benchmarking side of the smart city discourse is fuelling an arms race between cities to become smart, or even smarter.

But aren't cities "smart" by default and don't require to be dotted by a multitude of new technologies for making them smart? Cities are the hotspots of human culture and ingenuity. In urban areas we find most innovation and the birthplaces of humanity's most advanced culture and technology.

Simply put (and positively interpreted) cities are the single most successful and abundant life supporting system on the planet. So cities are already pretty smart, even if they almost exclusively lack the capability to run as zero-waste, energy-autarkic or resource-efficient systems. It is the promise to master such shortcomings of our cities by means of technology, which is one very appealing aspect of a Smart City.

The city of Vienna is in fact an ideal location to critically assess the concept of a Smart City. Over the recent years Vienna has been repeatedly ranked as one of the globally leading smart cities and meanwhile identifies itself with this branding. In 2011 the City of Vienna launched its 'Smart City Wien' initiative backed politically by the city's mayor himself. This initiative subsumes Vienna's urban development programs such as the Integrated Mobility Plan, Vienna's Urban Energy Efficiency Programme or the Climate Protection Plan all of which are funnelled in an integrated planning approach and complemented by a focus on citizen participation.

At realCORP 2014, Thomas Madreiter, the director of planning in Vienna's city administration presented Vienna's smart city "history" and future "smart" development plans. In his lecture Madreiter stated that many factors constituting Vienna's "smartness" are in fact well established planning traditions in Vienna. In its Smart City development framework, the city is building upon this planning culture to encounter challenges such as population growth and to attain "extreme protection of resources". These planning principles are:

According to Mister Madreiter a smart city should be built with a holistic approach that understands urban life primarily as a social, and only secondary as a technical and logistic problem. In this sense innovation in a smart city also implies social innovation, a type of innovation that is hardly provided by large corporations. In Vienna, socially oriented urban management traditions such as low-cost social housing are proving to be assets for urban equity and resilience, thereby becoming valuable urban development models for other cities as well. 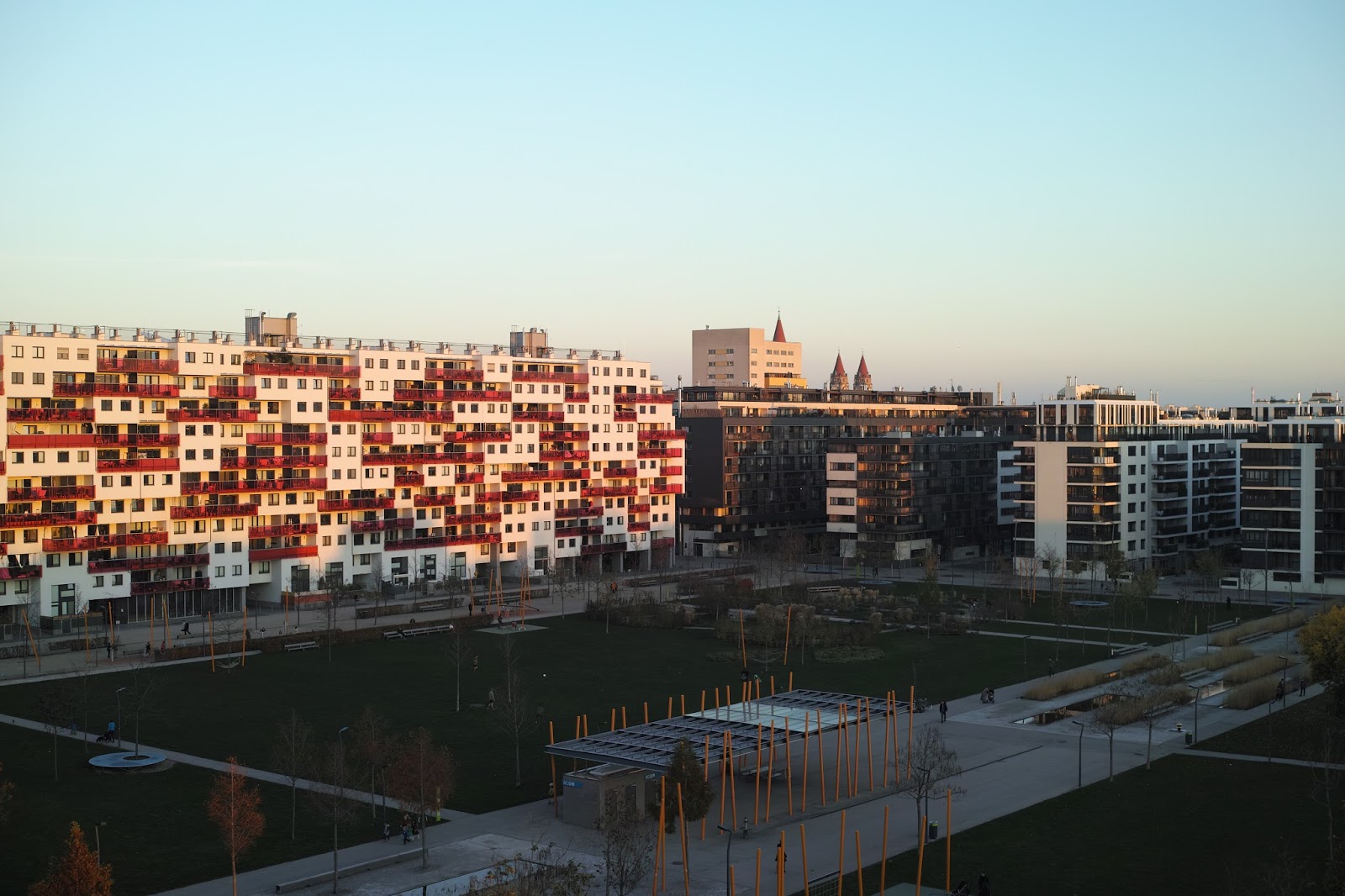 Reflecting on Madreiter's lecture, one challenge for urban governance in times of smart cities becomes very clear: The smart city hype will also require the public sector to become smarter in dealing with global corporations and in navigating the global competition amongst cities. For taking urban planning decisions, being smart must not necessarily mean to develop hastily or according to generic urban development strategies.

Rudolf Giffinger from Vienna University of Technology gave another remarkable plenary lecture. As a researcher, Mister Giffinger co-authored one of the first European-wide smart city assessments. At realCORP 2014 he found critical words for a technology-focussed idea of a smart city evoking concerns about cities turning into environments where „smart" technology is digitizing and controlling our everyday lives.

Looking at the example of urban mobility, Giffinger stated that even if we are making our cars „smarter" by electrifying them or making them driverless, they still remain cars with their physical effects on cities. (We all know these effects: excessive use of space, social alienation, safety issues, etc.) Such a technology-focussed approach to a "Smart City" does not include the (social) smartness we could use to empower our mobility choices in the sense that we aim for replacing car trips by non-motorized transport or public transport (and thereby gaining much in terms of quality of life).

In her lecture the urbanist and journalist Judith Ryser provided an analysis of different smart city typologies comparing "greenfield smart cities" such as Songo IBD in Korea to "retrofitting smart cities" such as London. These different smart city typologies pose diverging challenges for urban development in terms of infrastructure, urban growth or creative capital, amongst others and require adapted urban development strategies.

In her contribution Ryser also referred to the growing concern of urban populations who do not want their urban realities to be predominantly understood as "smart" (or non-smart) and thereby becoming an "adjectified city" where urban reality is taking shape according to pre-formulated urban development models:

"What may be symptomatic, and not universally welcome about the notion of 'smart cities' - and other 'adjectified' cities before them - is the relentless generation of alternative 'adjectified city' models aiming to impose frameworks for 'quality of life', together with the inordinate efforts of industry to appropriate these 'ideal type models' for its own aims. This tension between the 'adjectified cities' and the 'refuseniks' may well point to a profound (if not paradigmatic) change, expressed in the refusal, at least by a part of society, to have their 'quality of life' slotted into a binary existential contradiction, a choice between backward poverty and material wealth. The cities are the place where these contradictions are being played out."

Such a negotiation between top-down 'smart' solutions to urban challenges and urban populations organizing themselves in smart ways is still underway and by no means decided. Of course, smart urban technologies may help us in the quest to make our cities more resource efficient and raise urban quality of life. Yet, the important change and paradigm shift towards sustainable urbanisation will come as social innovation from within society and will not be a networked algorithm alone.

Moreover, as the recent World Urban Forum in Medellín has demonstrated, sustainable urban development will have to put am emphasis on the provision of urban equity. In this sense smart cities of the future may feature a pace of technological innovation complemented by an adequately vibrant social innovation. The more this innovation process is embedded in the various layers of society and the more diverse the population's participation in this process is, the smarter our future cities will become.