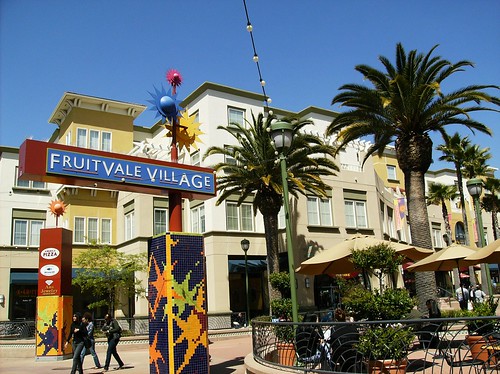 While meeting in Oakland last week, my NRDC colleagues and I were treated to a tour of that city's Fruitvale Transit Village, a multi-layered, inclusive, highly walkable, multiple-use development built around the Fruitvale neighborhood's BART (rail transit) station.  We were immensely impressed, as have been many before us, by the living model of sustainable development that the Village has become.  In a word, wow.

(This is the first of a two-part entry about Fruitvale.)

The tour was arranged and conducted by our friends Stephanie Forbes and Marsha Murrington of the Bay Area office of the Local Initiatives Support Corporation, one of the nation's leading sponsors of community development, especially in distressed neighborhoods.  They were great, and so were their partners, who joined us for key parts.

Fruitvale in relation to the rest of Oakland & San Francisco

According to its developer, the Unity Council (about which more in a minute), and related sources, the Village comprises the following:

(I suspect some of the numbers may be off by a little, since the sources conflicted, but that's close.)  And that's just Phase One, as I understand it. 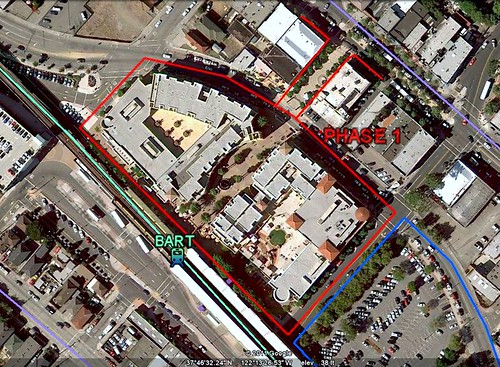 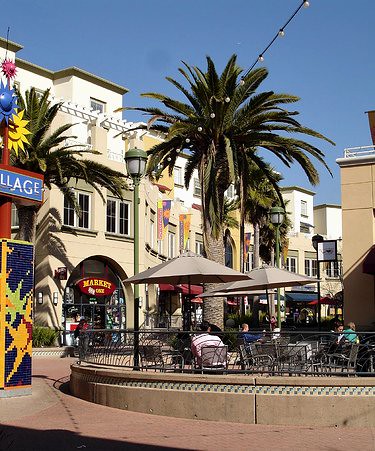 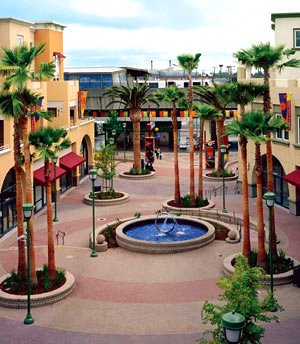 Left, cafe on the plaza; right, looking down the plaza to the BART station

Fruitvale Village impressed this visitor as loaded with all sorts of conveniences (including BART itself, along with several bus lines), very attractive, highly successful, and immensely alive.   Here's part of the Unity Council's description:

"[On] the BART train (which is elevated along this stretch – and especially northbound where you can see most easily to the east), you cannot help but notice a bright, colorful new complex of buildings – with palm trees, banners and apartment balconies all visible from the platform.  Descending and exiting the station, one is drawn into a lively pedestrian plaza, lined with retail shops and small restaurants, and equipped with seating areas and a fountain.  This path takes you naturally in the direction of the neighborhood's main commercial artery, International Boulevard, about a block to the east.  In a few moments, unless you stop to visit the clinic, library or senior center, you have traversed Fruitvale Village."

According to a presentation by EPA's Charles Lee, a longtime leader in environmental justice, the neighborhood's ethnicity mix is 52 percent Latino; 23 percent Pacific Islanders; 16 percent African American; 7 percent white; and 3 percent Native American and others. 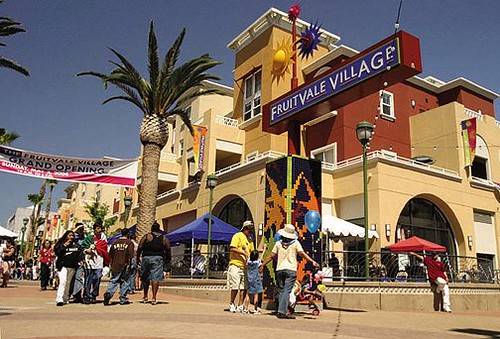 The development has rightly won all sorts of awards, and has been cited by the US Department of Transportation as a case study of environmental justice in action.

This didn't happen without immense foresight, determination, and skill.  Chronologically, the story begins with the formation of the Unity Council (officially the Spanish Speaking Unity Council), a nonprofit community development corporation whose mission is "to help families and individuals build wealth and assets through comprehensive programs of sustainable economic, social and neighborhood development," centered in the Fruitvale neighborhood.  Amazingly, it was formed back in 1964.  Its services are many, including workforce development, health care, a business improvement district, a public market, a farmers' market, home ownership assistance, childhood education, youth services, a literacy program, senior services, community facilities and, of course, land development.  The Council's immensely interesting history is captured in an academic paper that can be downloaded here. 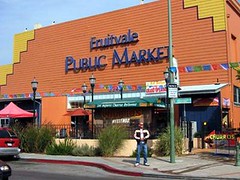 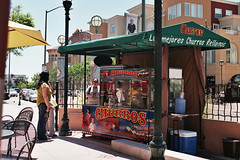 Fruitvale was once a thriving community, but it deteriorated over several decades as businesses, jobs and middle-income homeowners left the neighborhood, and as unemployment and crime increased.  Its cohesion was threatened further in 1991, when BART announced plans to build a large parking facility for suburban commuters on land adjacent to the Fruitvale station.  While clearly the wrong thing to do when viewed in today's context, 20 years ago that was still the primary strategy of many regional transit systems.  But, ahead of their time, the community objected, their voices led by the Unity Council.

Tomorrow: how the Village came to be, and where it's headed.