Residents of award-winning, transit-oriented development say no to transit 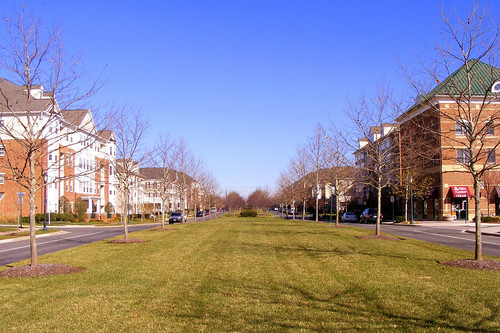 See that wide median running down the boulevard?  That's where the light rail will go.  Or not, as it may turn out.

So much for the widely-touted concept of "transit-ready" development.  The residents of an acclaimed new urbanist village built around planned light rail (or bus rapid transit) stops have decided that they don't actually want the transit their community was designed for.  So let's be more careful about the claims we make for master-planned suburban development, shall we?

God, that paragraph sounds like something straight out of The Onion.  But it's real. 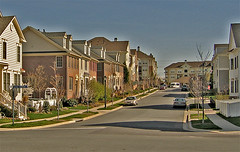 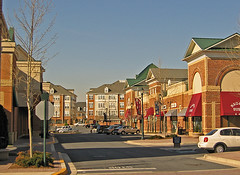 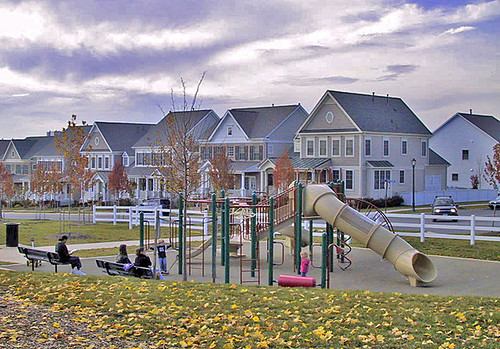 The developer and designers of King Farm, a 440-acre community in the outer suburbs of Washington, DC, certainly tried to get it right.  Other than the dubious practice of naming suburbia after the farms that it paves over (there's also a road called "Rolling Fields Way" running through the heart of the development; I swear I'm not making this up), this attractive development as conceived would have gotten lots of praise from me, had I reviewed it.  On what became an infill site after sprawl gobbled up everything around it, not far from the last stop on the Washington Metro system's Red Line, and with mixed uses, a variety of housing types, walkable design, fixed-guideway transit planned through the center, and excellent density for a suburb, King Farm's concept represented what I promote in this blog and in my work all the time.

It did get lots of praise from others, especially for its transit-oriented design.  Bestowing a prestigious Charter Award on the development, the Congress for the New Urbanism called it "one of the most exciting projects" among the candidates.  CNU's web site includes this passage:

"The town is designed around a light rail line linking the town center to the subway station. Similar to Commonwealth Avenue in Boston, the light rail will be built along the principal boulevard. The town square, town center neighborhood and the office neighborhood are located along this street and mark the proposed stops on the rail line." 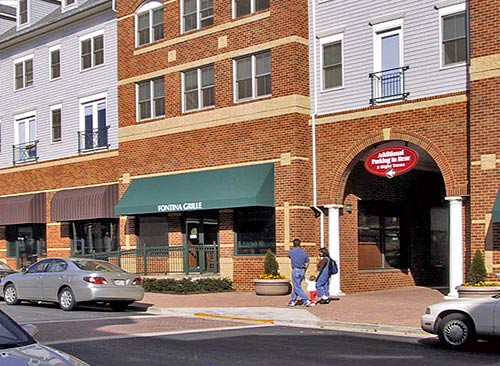 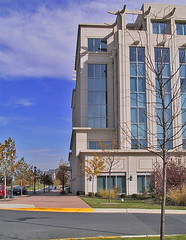 "As a high-density, walkable, mixed-use community, King Farm in Rockville, Maryland, takes full advantage of the wide variety of current and future transportation choices at or near the site . . . A proposed Corridor Cities Transitway will provide light rail or bus rapid transit from the Metro station, through King Farm, continuing through Gaithersburg, Clarksburg and possibly all the way to Frederick, Maryland."

As noted at the top of the post, King Farm Boulevard, running through the heart of the community, was designed with an extra-wide median specifically to accommodate transit vehicles.  Two stops have long been planned in the development for the Transitway.  They are marked in red on the map and satellite image below.  (Note that, although alternative alignments for the route have been studied, all options include the two King Farm stations.)  On the Google Earth image, the transit route is shown in blue/green, linking up with the Metro line shown in red.  Both light rail and BRT are under consideration. 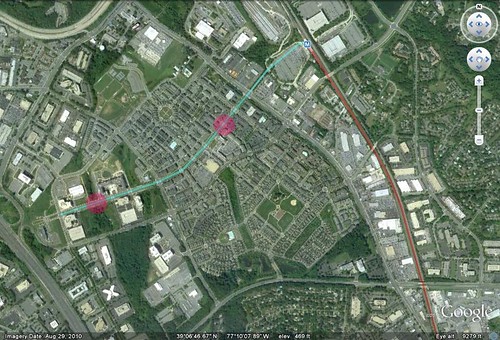 Well, the Transitway is going to be built.  The government authorities are in the process of deciding the details.  But, after listening to the NIMBY complaints of King Farm residents who are just fine with driving their cars and apparently see transit as blight rather than benefit, the Rockville City Council just voted 4-1 to route the transit corridor around, rather than through, the walkable development of 3200 homes along with commercial space.

Writing on the excellent local blog Greater Greater Washington, Dan Reed reports that a resident founded the "Coalition for the Preservation of King Farm" after realizing that transit vehicles could run in front of her condominium on King Farm Boulevard.  She says that she was never told about the transit that the development was built for.  Sean Patrick Norris reports in the Rockville Gazette that "the group is worried about the effect construction will have on traffic, parking, pedestrian safety and buildings."  (Does anyone else see an irony in something called the Coalition to Preserve King Farm when 90 percent of the real King Farm no longer exists, because the coalition founder's condo is sitting on top of it?)

City Councilmember Piotr Gajewski, a King Farm resident who apparently saw no need to recuse himself from the matter before casting a number of votes on it, reportedly said that the Corridor Cities Transitway would bring "no benefits" to the neighborhood while being "incredibly disruptive."  In an article written by Cindy Cotte Griffiths, the local news site Rockville Central quotes Gajewski as saying he "unequivocally opposes light rail because it is only possible if it goes down the median of King Farm Boulevard," the street that was specifically designed from the beginning to accommodate it. 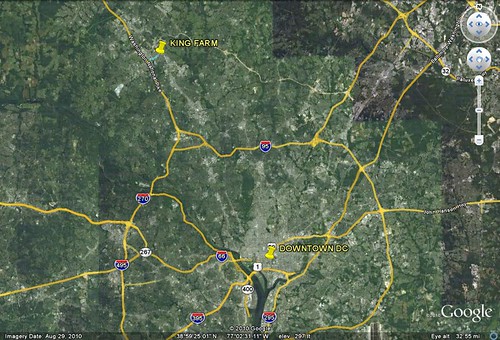 See, the thing is, we need the transit to make these big suburban developments work for the larger region's traffic and for the environment.  King Farm is not an inner suburb.  It's about 10 miles beyond the Capital Beltway (see image above) and 21.6 miles from NRDC's downtown DC office, according to Google Maps.  There's a shuttle to the Metro station, another thing the developer did right, but that only helps if you're going where the Red Line goes, basically only south from the station since it's the end of the line.

For those who live, work or shop along its route, the Transitway will not only make it easier to reach the Metro (or to reach King Farm from the Metro) at more times during the day but also run along more of an east-west route, linking its customers to additional centers of employment and activity.  A majority of King Farm residents and visitors will probably still drive.  But that's OK, because even small mode shifts make a difference for the environment and, over time, ridership grows as newcomers who are attracted by the transit move in to the development; that's how it works.

But, if the residents see "no benefit," what's the point of designing for transit, exactly?  (I know: rhetorical questions are coming fast and furious today.) 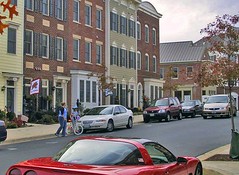 To their credit, the residents of another iconic new urbanist development, the nearby Kentlands (photo left) are reportedly enthusiastic about the Transitway and are advocating that it be light rail rather than BRT, according to Reed's post.  Good for them.

But, as to King Farm, I think there's a lesson here.  "Transit-oriented" or "transit-ready" may not mean squat if the transit isn't fully committed.  If the line isn't built through the development, King Farm will still be a lot better than the sprawl that surrounds it, but it won't be all that we said it would when we were passing out those awards.  And, next time we give out awards, we should be more careful with our praise.

Meanwhile, the final decision will be made by the governor.  Expect the NIMBY chorus to get louder.