The revival of Main Streets 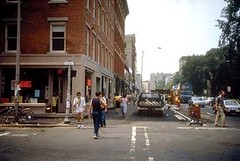 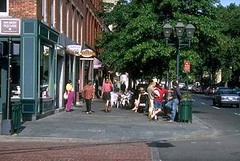 The Project for Public Spaces has a great new web feature up highlighting some of their work in improving older commercial streets, with nice images (some of which you can see here).  The feature celebrates PPS's new partnership with the National Trust for Historic Preservation to provide hands-on assistance to communities seeking to preserve, restore and revive their traditional commercial areas.   Since both of these organizations have proven track records in making the most of neighborhood- and town-scaled placemaking, this should be a boost to the causes of revitalization and walkability. 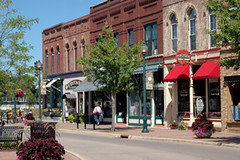 Many of America's Main Streets suffered significant decline and disinvestment in the late 20th century.  For smaller cities and towns in particular, the loss of vitality in their traditional shopping and service corridors – and concurrent increase in social, economic and environmental harms from sprawl, driving, pollution and blight – was every bit as damaging as the better-publicized disinvestment of central cities in larger metro areas.

Of course, big cities also suffered a version of these losses:  in addition to downtown disinvestment, many suffered decline in neighborhood-based commercial streets as well.  That was very much the case with the 14th Street corridor in Saint Louis, for example, which is now coming back strong as Crown Square.

The Trust has had a highly regarded Main Street Program for years, using a structured approach to preservation-based economic development involving organization, promotion, design, and economic restructuring.  PPS, for its part, works with community and government partners in the programming, design and management of streets, markets, parks, waterfronts and other public spaces.  Like the Trust's Main Street Program, PPS's projects are place-based and involve workshops, planning, training and research.  This is a logical partnership.

According to a press release announcing the partnership, the two groups will develop joint programming and initiate a pilot project focusing on transportation.   Collaborative community involvement will be a key component of the process.  The groups will select a community that is already being served by the Trust's Main Street Program and work together with the community in the design and implementation of a transportation plan that helps secure the community's future in a walkable fashion.

In addition to resources on the PPS and National Trust sites, NRDC's Picturing Smart Growth, an interactive web site showing 70 neighborhood-scaled, step-by-step potential transformations, features many Main Street-style redevelopment concepts in declining corridors.  Some, such as the blocks in Henderson, Nevada shown above, never quite became "Main" streets in their original incarnation but may have great potential for becoming so.  (In many places, unfortunately, transformations will require investment that may have to await economic recovery.  But now is the time to plan.)  Each scenario is geo-coded and mapped for viewers' reference.

Note in all of these images what a huge difference investment in people-oriented street infrastructure can make.  Starting with transportation makes a lot of sense.  Good luck to PPS and the Trust in a terrific venture.