SOUTHEAST, Mich.—Beloved by roadway engineers for both their ability to handle large traffic volumes and their low construction and maintenance costs, roundabouts are on the increase. Oakland County leads the region with 24 presently in operation, and dozens more are in place or under construction in Macomb, Livingston, Washtenaw and Monroe.

When roundabouts are placed appropriately, they increase traffic flow and provide motorists with well-documented safety benefits. However, for non-motorized users -- bicyclists and pedestrians, and especially those with disabilities -- roundabouts present unique challenges to safety and accessibility. 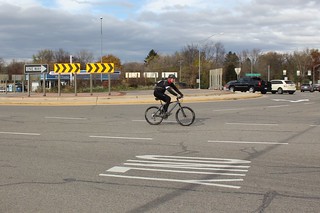 Roundabouts are a modern innovation that differ from traditional traffic circles in several ways. While traffic circles have been around as long as there have been automobiles, the term 'roundabout' specifically refers to a circular junction where incoming vehicles are forced to slow down and priority is given to circulating and exiting traffic.

They were developed in the United Kingdom in the 1960s to increase motor vehicle capacity in that country, and spread to the United States in the 1990s. Michigan's first modern roundabouts were constructed in 1996 on Tienken Road in Rochester Hills.

By allowing cars to pass through without stopping, roundabouts can handle as much as 50 percent more traffic than an intersection that uses traffic signals or stop signs. They can greatly increase motorist safety as well -- since traffic is forced to slow down and the possibility for head-on collisions is eliminated, car crashes are less frequent than at traditional intersections.

When crashes do happen, they are less likely to cause injury.

But are they safer for non-motorized users as well? They can be, but only if they are designed properly.

Todd Scott, greenways coordinator for the Michigan Trails and Greenways Alliance, points out that not all roundabouts are created equal. While well-designed examples can be relatively safe even for bicyclists and pedestrians, he says, poorly-engineered ones can be downright scary.

As an example of the latter, Scott cites a three-lane, triple roundabout along US-23 in Green Oak Township. 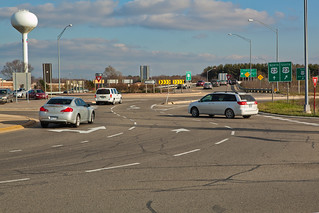 "Even in a car, I've never made it through that intersection following the rules," Scott says, "and on a bike, I can't even imagine getting through it."

"Road agencies will say that the use of roundabouts results in minor crashes instead of major ones," Scott continues, "but if I'm on my bike, every crash is a major crash."

As for pedestrian options, the Green Oak intersection, despite being located in the center of a major retail shopping area, does not include a sidewalk or crosswalk.

Safer Roundabouts for Pedestrians and Bicyclists

Complete Streets legislation, passed in Michigan in 2010, requires road planners to "consider the needs of all legal users," including non-motorized users and people with disabilities. Enactment of Complete Streets laws may limit the construction of auto-only intersections like the one in Green Oak Township.

Less than three miles away, in downtown Brighton, a recently-constructed roundabout has been designed to effectively accommodate all types of traffic. The street curves gently as it enters the intersection, forcing cars to slow to a speed that does not threaten pedestrians and bicyclists. Sidewalks approach the circle from all directions, and clearly marked crosswalks on adjoining roads are punctuated by curbed 'splitter islands' that enable pedestrians to cross one lane of traffic, pause on the island until traffic is clear, then cross the second lane. 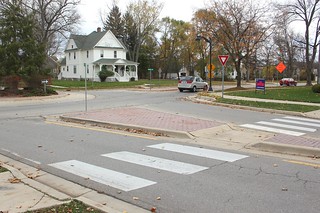 To cross such an intersection safely, pedestrians are instructed to use the crosswalks, just like at any other intersection, and cross each adjoining street one at a time. Pedestrians never need to enter the circle of traffic. Pedestrians have the right-of-way over vehicles, but as in all crossings, should wait for a gap in traffic and cross with care.

Cyclists, on the other hand, have two options: they may dismount and cross each street as a pedestrian, or they can take the center of their lane and behave as a motor vehicle (the latter requiring a degree of experience and confidence). NOT recommended, however, is circling slowly along the perimeter. Research has shown that bicyclists on the outside of traffic are often struck by entering motorists who fail to see them -- which is why separate bike lanes are not painted in roundabouts.

Even the best roundabouts, however, pose a special problem for pedestrians who are blind or have a disability. Unlike at a traffic light, vehicles in roundabouts never come to a complete stop, and pedestrians must instead rely on timing gaps between traffic. This is tricky for those with visual impairments or those who are unable to cross a lane of traffic quickly. 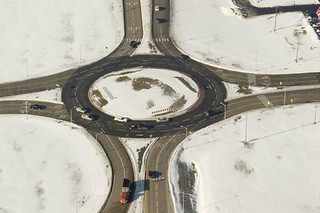 In 2007 the Road Commission for Oakland County faced a lawsuit from three residents with disabilities who charged that they were unable to use two roundabouts on Maple Road and one at the intersection of Farmington and Fourteen Mile Roads in West Bloomfield and Farmington Hills.

In response, the commission experimented with two types of traffic control devices and determined that a high-intensity activated crosswalk, or HAWK, would best enable pedestrians to cross the intersection safely. HAWKs suppliment traditional painted crosswalks with yellow and red lights that may be activated by pedestrians on an as-needed basis.

In a 2011 settlement, the RCOC agreed to install HAWK signals at the Fourteen Mile Road intersection and at several other roundabouts throughout the county. Although this settlement is only binding in Oakland County, the example set here in Michigan is likely to be watched by road planners across North America as they consider the use of traffic control devices at roundabouts.