The Sky Has No Limit: Transforming an Elevated Road Into a Sky Garden in Taiwan 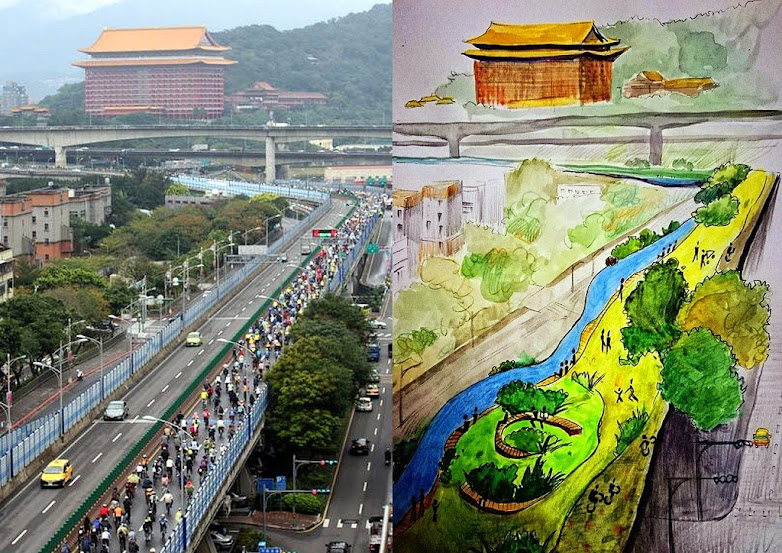 An inspirational campaign to transform a 4 km (2.4miles) elevated road into a distinctive landscape was launched in Taipei, Taiwan in 2014.

If it succeeds, Capital Sky Garden/Biking Highway would be Taipei's version of Highline Park in New York City but on a significantly larger scale with the highway still used for vehicle traffic.

Xin-Sheng Elevated Road was constructed in 1986 as part of a road-building project to feed the city's ever growing appetite for transportation. The city built a number of highways and elevated roads as a solution to its transportation issues during this period. Xin-Sheng Elevated Road was built along an old irrigation canal called Jue Jun Stream, which had become polluted due to rapid urbanization and lack of investment in a modern sewage system in the 1970s. 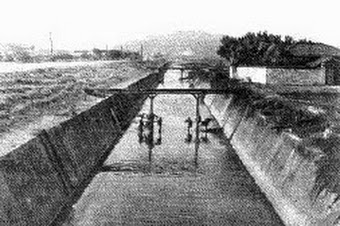 Jue Jun irrigation canal was built during Japanese colonization in the 1920s.

Xin-Sheng Elevated Road was built along the canal. 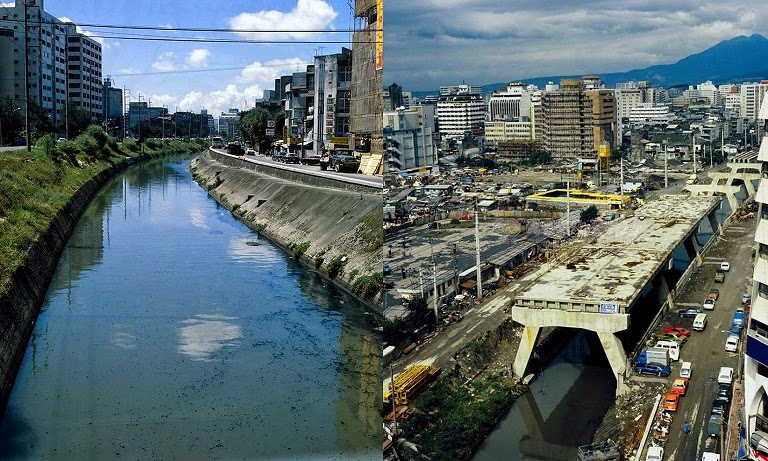 Polluted?! Let's cover it with an elevated road! How smart and convenient?!

After three decades of use, Xin-Sheng Elevated Road is aging and requires expensive maintenance every few years. The last reinforcement in 2009 cost more than 2.6 billion NT (860 million USD), and the road was closed for one year during maintenance.

Ironically, the impact of the road closure on traffic proved manageable, calling into question the road's supposed integral role in managing the city's traffic. Some transportation scholars such as Prof. Jason Chang, Director of Advanced Public Transportation Research Center at National Taiwan University, believe that the elevated road is no longer an essential traffic artery in Taipei as many alternative routes are available in addition to new subway lines. 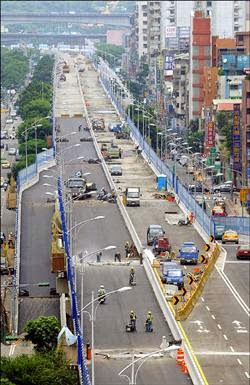 Past neglect of public transportation such as bus rapid transit (BRT) and subways (Taipei opened its first subway only in 1996) combined with massive road infrastructure and rapid economic growth has made Taiwana haven for private vehicle users at the cost of air pollution, congestion and an unfriendly pedestrian environment.

The country has one of the highest per capita private vehicle rates in the world. This Capital Sky Garden campaign has brought serious attention to the soaring rates for petro-powered private vehicle use that continued to increase despite rapid expansion of the city's subway system in recent years. Taipei's subway system, or mass rapid transit (MRT), has expanded rapidly since it opened in 1996.

The system grew from nothing in early 1996 to a 129-km system with 107 stations that handles more than two million passengers each day in 2014. Despite the modern and convenient public transit option the 20-billion-dollar subway system provides the city, it has unfortunately failed to reduce private vehicle use in metropolitan Taipei. More than half of all daily trips in the city are still made by petro-powered private cars and motorbikes. Research has also shown that most MRT passengers were previously bus users who shifted from one mode of public transit to another.

While the MRT's rapid expansion will continue into 2030, transportation scenario simulations predict no signs of decline in private car use over the next two decades. 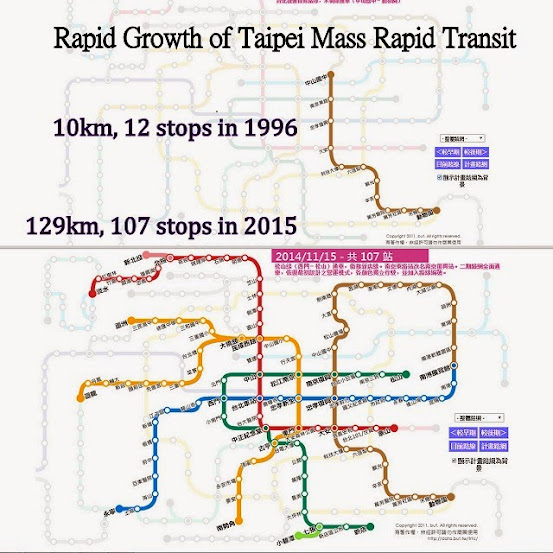 Rapid growth of the MRT system has failed to reduce private car use.

It is predicted that further expanding the MRT system in the following two decades will not change the percentage of all trips made in private vehicles in metropolitan Taipei. 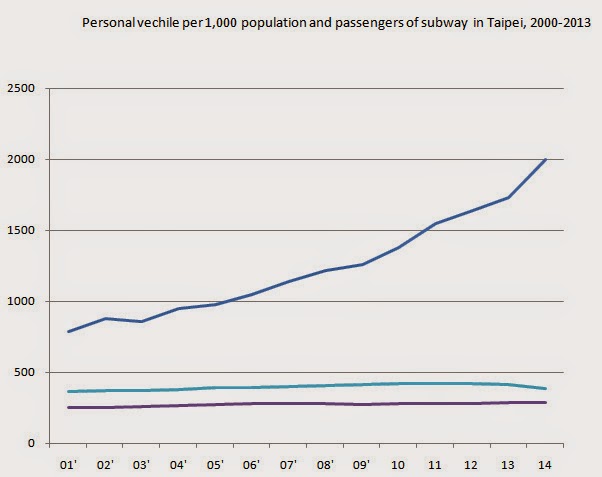 Graphic: Daily subway passengers has grown to 2 million while the numbers of cars and motorized two wheelers per 1,000 population has showed no significant signs of decline in Taipei, Taiwan.

Orthodox thinking in the transportation sector posits that more roads should be built in order to reduce traffic congestion and meet increased demand for private car use. However, building more roads has proven to be a problem rather than a solution. Many studies have shown that building roads leads to increased private car use. For instance, Gilles Duranton, an economist at University of Pennsylvania, called this phenomenon the "fundamental rules of road congestion," adding that "road capacity just increases the total number of miles traveled by private vehicles." Taipei's situation clearly shows that the appetite for private car use has been significantly ignited by the abundant supply of roads and that private car use has not been tamped by the availability of convenient public transit.

The MRT in Taipei has shown that a new subway system can take people out of cars and put them on public transit, but the resulting reduction of road congestion will soon attract another wave of private vehicles until the similar traffic capacity is reached. When more low- and middle-class people, mainly students and females, began using the MRT, the less congested roads soon attracted more cars.

Most transportation infrastructure in cities in developing countries is built to accommodate private vehicles instead of moving people efficiently, which ultimately encourages their use. Taipei's situation shows that once private vehicles-oriented infrastructure is established, promoting eco-mobility becomes extremely difficult even when high quality public transit is available. The city has reached a new transportation era where convenient and affordable public transit is available, and private car use should be discouraged in an effort to significantly improve the quality of life in the city.

Nevertheless, while availability of high quality public transitis essential for promoting green public transportation, this alone is insufficient. Reclaiming roads from car-only space to public space for pedestrians and biking is inevitable. It is unfortunate that maintaining a certain degree of congestion may be necessary to move more people out of cars and on to public transit.

In urban transportation, the adage of no pain (congestion), no gain (increased public transit usage) is somehow true.

We believe that we have a good chance to sweep away decades of a huge dull gray elevated cement road used only by private cars and convert it into a dark green one-of-a-kind sky garden for biking and strolling.

Hundreds of thousands people who live near the elevated road, some as close as a few feet, have suffered from traffic pollution, noise and vibrations from the road for three decades. This can be changed immediately. 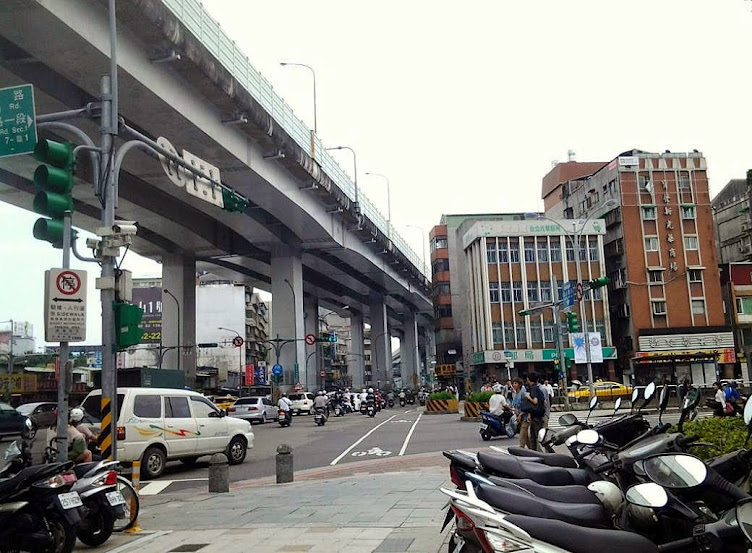 The elevated road is as close to residential buildings as a few feet!

The project has the potential to become a world-class urban eco-mobility model, where a city boldly abandons an old elevated road to aggressively promote bicycle commuting, reduce carbon emissions, and pursue sustainable development. Bicycle commuters will be able to make quick and comfortable trips to the north and south of Taipei, which will attract more bike commuters.

Furthermore, there is ample area under the elevated road that can serve as prominent arts and cultural events spaces. The project can also improve public health through sports and social activities and generate new cultural and recreational jobs for local residents. The project team envisions amphitheaters, education centers, dining piers, urban sky gardens, waterfalls, climbing walls and a wide array of sport facilities under the Capital Sky Garden.

Possibly learned from Paris, Taipei's newly elected populist Mayor - Ko Wen-Je(???) has pledged a participatory budget of 10 billion NT (320 million USD) for proposed civil projects in his 2014 mayoral campaign. The scale of the proposed civic scheme is ten times greater than the one currently in place in Paris. With nearly 40,000 supporters, the Capital Sky Garden/Biking Highway project should certainly be included in the scheme.

The capital city has suffered environmentally from high private vehicle use. This has alarmed many citizens who feel that things need to change soon. We are thrilled at the amount of positive responses, which hit 40,000 in one month. The campaign has proposed calling for an international landscape design competition to bring in the world's best landscape designers for this project.

There are many inspirational and practical reasons to transform Xin-Shen Elevated Road into an urban sky garden, all of which respond to the city's vision for the21stcentury to be "environmentally sustainable and humanly livable", not only the convenience for which the city is famous.

Private cars and motorized two wheelers should not be the dominant of transport in any modern city considering climate change and the prevalence of non-communicable diseases (NCDs).

This sky garden, which will stretch 4 km through the center of the city, will encourage Taipei residents to walk more, an activity that is healthy for the mind, the body and the city as a whole.

We can't wait to realize this dream project! 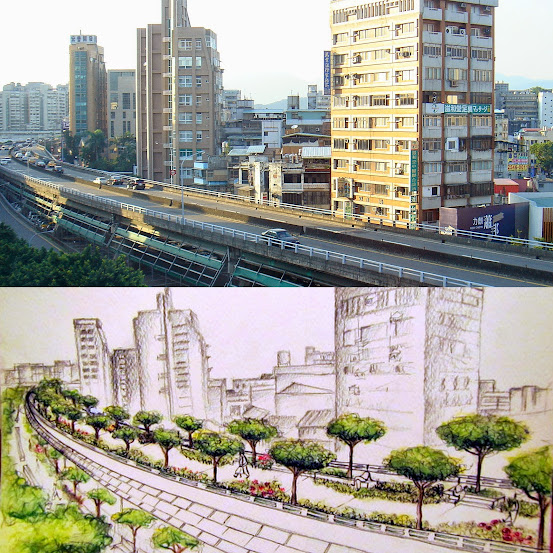 There is nothing more powerful than a visionary graphic of what is possible in the future contrasted with the present situation.