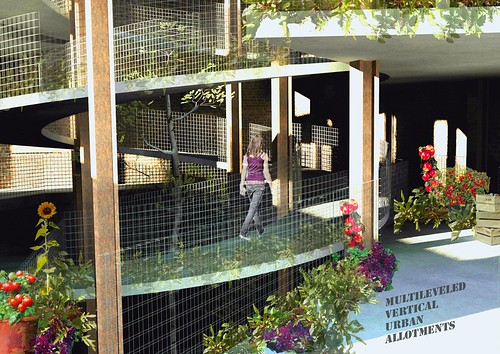 Aspiring interior designer Lucie Sadakova has come up with a striking concept to bring more green space and nourishment into a scruffy part of London.  And, despite being in a sense all about an outdoor activity, it is in fact an interior transformation, a proposed adaptive reuse of an old building way past its prime.

One of the things I love about the ever-fascinating website Inhabitat is that it brings me into contact with cutting-edge ideas, frequently green ones.  Yet it stimulates my environmental imagination in a radically different way than does my usual world of urbanism, which is more about perfecting pragmatic, tried-and-true concepts and bringing them to scale.  Inhabitat isn't about the tried and true but the new and provocative.  Its predominant aesthetic is unabashedly modernist.  Many ideas it presents may never be brought to scale:  but I like it that they take me away from the familiar. 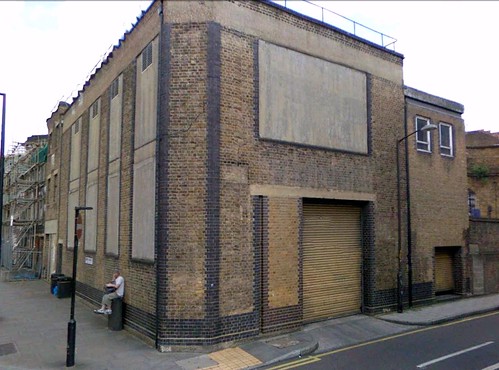 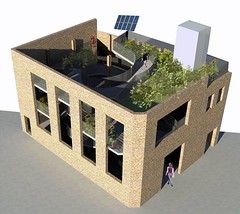 In this case, Inhabitat ran a story about Sadakova's proposal, which led me to her own website and blog, where she writes:

"I have become interested and intrigued by projects that make use of neglected spaces of cities and focus on innovative design solutions that introduce new ideas to local areas in order to improve life of their residents."

For her final degree project at university, Sadakova designed a concept she calls Multileveled Vertical Urban Allotments, which in plain English means hollowing out the guts of an old warehouse, opening up its roof and (enlarged) windows to the elements, and filling the space with a sort of stacked series of green plots that could be gardened by nearby residents. 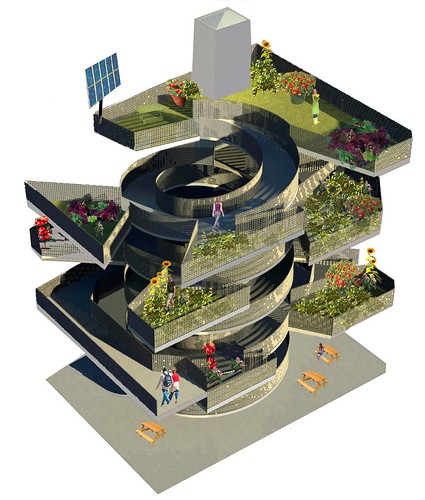 In a sense, it takes the wonderful concept we know in the US as victory gardens, where city residents cultivate small plots of land on public spaces, and tiers the plots vertically so they require less space at street level.  And it saves an old building at the same time.

The site is a hardscrabble corner by the elevated tracks, on the South Bank of the Thames in the Southwark area of London.  There are some pubs and eateries nearby, but it's not the sort of place one would go without a reason. 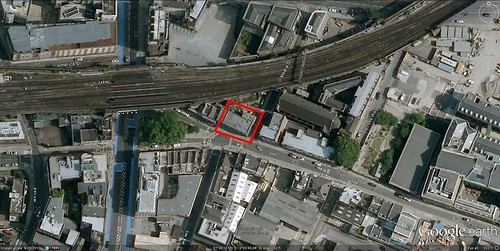 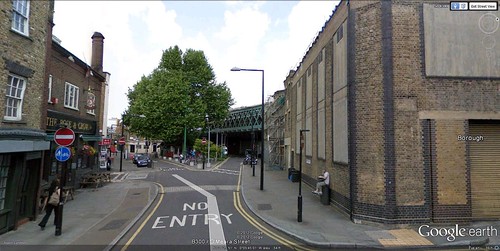 As you can see, the old building is nicely proportioned but manifestly unfriendly to the street, just kind of sitting there.  Sadakova's project would bring the outdoors into the building, and the indoors outside, creating a space that really is both:

"The project aims to bring an innovative solution by designing multileveled vertical urban allotments which in turn make use of derelict or underused spaces. Eventually multiple function of the building that is open to the public, offers an interpretation centre for schools and seasonal use for those affected by S.A.D (Seasonal affective disorder) all contributes to sustainable development in London."

The building is privately owned, and there does not appear to be any certainty that the project will actually be built there.  (The "Union Street Urban Orchard," only a short walk away, turned out to be very temporary.)  But the important thing is that it could be.  My only concern is whether the walls of the old building (which would be opened up considerably under Sadakova's plan) would allow enough light and moisture inside to facilitate growing.  I suspect she has thought that through.

So, if not in this particular space, why not in another?  The concept is too good not to be realized somewhere.

(For a much more ambitious – and to my eyes perhaps less accessible and neighborly – approach to vertical farming, see Lloyd Alter's article about the "Plantagon" in Sweden.)