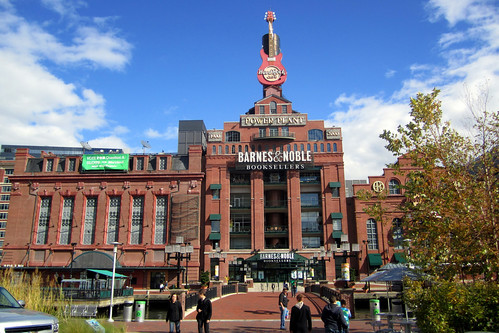 Industry analysts predict that environmental and economic factors will lead to the retirement of dozens of aging coal-fired power plants in the coming decade.  Many of these occupy important locations in cities, often with valuable access to waterfronts.  According to a new report, these sites present tremendous opportunities for new civic and private uses such as riverfront housing, shops and offices – as well as museums, parks and other community amenities.  I agree.

The report (Repurposing Legacy Power Plants: Lessons for the Future), issued last month by the American Clean Skies Foundation, makes the case for doing exactly that, presenting eight case studies of repurposing projects that have been completed or begun. The Foundation believes that these projects provide "points of reference for business leaders, policy makers, and community stakeholders who wish to prepare for the coming wave of power plant retirements in their localities."  (Much of this post has been adapted from language in the report.) 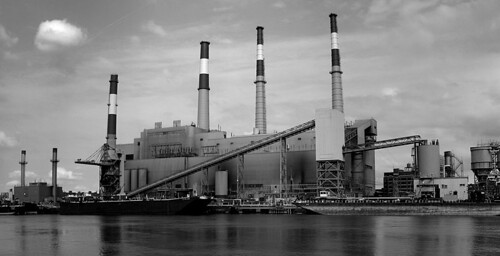 Providing templates for taking advantage of opportunities created by the country's transition to a future with cleaner energy production is important, in part because that transition needs to accelerate.  From the report:

And all that, of course, is in addition to consequences from the massive amounts of global warming emissions produced by these older plants.

The expected wave of coal plant retirements is already beginning to arrive. The report identifies more than 20 different coal-fired facilities across the US that, in the authors' judgment, are likely opportunities for near-term redevelopment.  States in the Midwest, the Northeast, and Texas currently project the largest number of retirements.

Among the case studies in the report are the following:

In some cases, retired plants have already been closed but left abandoned for years or decades, creating blight while presenting stark portraits of opportunities forgone – but, as the report shows, this need not be the case. The report's authors stress that interested parties should plan early for site reuse and adopt a collaborative approach that assures the involvement of all stakeholders, including incumbent utilities and power companies:  "Clarity of vision is crucial, but it is equally important to develop a realistic business plan with feasible financing mechanisms that can cover the considerable costs of site cleanup and redevelopment." 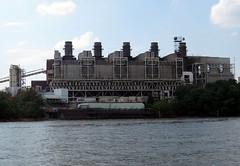 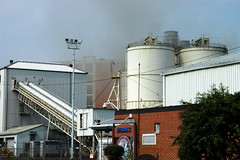 Early power plant redevelopments frequently have capitalized on preserving plant structures with significant historic and architectural value.  But not all power stations are worthy of preservation.  For example, alluded to in the report but not detailed there is the hoped-for retirement of the 60-year-old Potomac River Generating Station in Alexandria, Virginia (photos just above) and its replacement with "a thriving and sustainable 21st century residential and commercial neighborhood."  An affiliate of the Clean Skies Foundation, Potomac River Green, has been developing a collaborative plan for the 25-acre site's successful redevelopment that it hopes will help persuade authorities to close the plant.

Illustrative neighborhood design is being led by the Alexandria office of Cooper Carry architects, and the preliminary plan released by Potomac River Green is exciting.  It would include some 600 multi-family and townhouse homes, 200,000 square feet of offices and shops, and an advanced, demonstration "energy building"/museum that would use efficiency and renewable energy technology to produce more power than it consumes, while also recycling wastewater and stormwater runoff for a substantial part of the development. 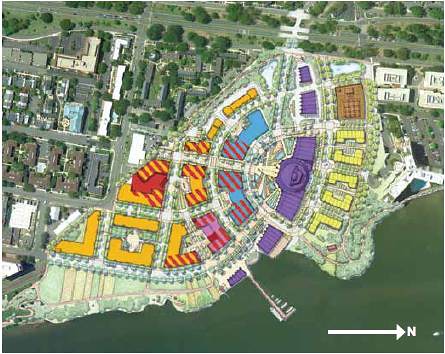 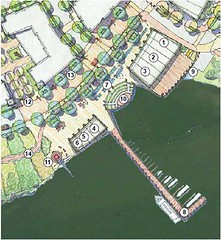 Even better from a neighborhood design standpoint, the plan would extend Alexandria's existing street grid to the waterfront, connecting nearby neighborhoods currently blocked from the river by the power plant to the river and a range of walkable shops, services and public amenities.  These will include community gardens, a plaza, a performance area, a boardwalk, a boathouse and a water taxi station.  Infrastructure for the neighborhood would include solar, geothermal and fuel cell energy systems.

While the plant may or may not be retired in the near future, and while Cooper Carry's conceptual plan may or may not become the basis for what replaces it, I love the vision's potential for turning a major source of pollution and community blight into exactly the kind of smart growth neighborhood that the DC metro area needs to absorb growth that otherwise might become sprawl.

Now imagine if that sort of template could be implemented across the country.