By Brent Toderian and Jillian Glover

With cities seeking to involve diverse voices in city-making to get beyond "the usual suspects," Vancouver urbanists Brent Toderian and Jillian Glover examine how cities in their region are finding new ways to increase civic participation.

Originally published on The Planetizen

As more people choose to live in cities, local governments find themselves facing increasingly complex issues in city-making. Demands for affordable housing and public transit, tensions around gentrification and density, even connecting the dots between city planning and climate change, are just some of the more high-profile critical conversations our cities need. Solutions can come from many places, but smart cities realize that engaging the broad public in the city-making process leads to better answers and a deeper public ownership of our future.

Faced with this knowledge, cities are struggling to develop new and innovative community engagement methods, including those that embrace new technologies, social media, and collaborative design methods, to better bring the public into conversations on the future of city life. Let's face it—not all of our engagement in recent decades has been very engaging!

This article's authors have looked across Metro Vancouver (a region known internationally for its public consultation) for recent best practices and lessons in better community engagement. While some new methods are bringing key services online, others are as simple as changing the location of council meetings or getting people walking and talking in their neighbourhoods. All of these lessons involve moving beyond traditional consultation practices that cities have relied on for decades.

Although lessons can come in many forms, and these don't necessarily represent the "best," here are ten lessons from Metro Vancouver that we found particularly worth sharing.

1. Bring City Hall to the Community – When City Hall is difficult to access due to location and service hours, citizen engagement declines. As a result, some Metro Vancouver municipalities are having staff and services set up shop outside of City Hall. Pitt Meadows, for example, has been scheduling City Council meetings at seniors centres and high schools, while Vancouver has proposed a pilot program for a mobile kiosk, or 'mini-City Hall,' to make key city services (such as paying a parking ticket or registering to vote) available at select times to neighbourhoods, particularly those with limited transit access. Other cities are simply looking at when they schedule public hearings relative to when their citizens are working – a simple but important element of better access.

2. When Hosting an Event, Think Beyond the Open House – Cities are making their public engagement events less stuffy and more fun to encourage attendance, especially by families. These events often gather knowledge and perspectives while also presenting enjoyable activities such as entertainment (music, movies, etc.), food, and public speakers. For example, in undertaking a consultation process while developing a sustainability strategy, the city of Burnaby organized an "Environment Festival." The festival included a farmers market, BBQ, live music, face painting, a bike tour, Kids Zone activities, a guided nature walk, prizes, and more.

3. Bring the Town Hall Online – A online town hall is an event where cities engage citizens via social media outlets such as Twitter or Facebook for a scheduled time period. Users can ask questions, usually to a mayor, and get instant feedback regarding important issues. Vancouver's Mayor Gregor Robertson for example, hosts Twitter town halls on topics such as citizen engagement, homelessness, and housing affordability. The first such Twitter town hall took place days before the Vancouver civic elections, when Mayor Robertson—using the hashtag #askgregor—hosted a high profile virtual town hall meeting at the offices of Hootsuite, a Vancouver-based social media company. 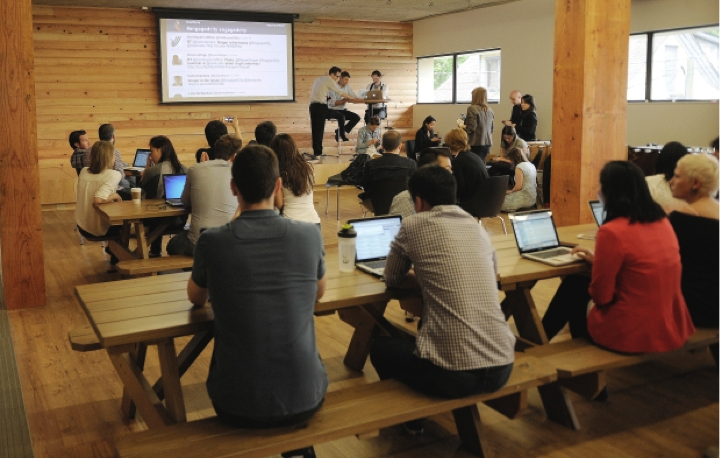 4. Allow Access to City Services via Smart Phones – In the age of mobile devices with apps for everything from grocery shopping to vacation planning, cities are picking up on the trend to make city services available online via mobile phones. When the City of Surrey reviewed its website data in 2012, it found that 30 percent of all visits came from a mobile device. As a result, Surrey developed a mobile-friendly website in addition to several apps that provide information and convenient access to city services such as waste collection schedules, recreation services and locations, and building inspections.

5.Tell Stories – Storytelling can be effective in bringing together a diverse group of people to share experiences in how to improve community. Storytelling can be used to peak citizen interest in an issue and access local wisdom that other methods struggle to access. Storytelling can involve many different kinds of communication—for example, the City of Vancouver partnered with a highly popular monthly "Pecha Kucha" event to launch the Greenest City 2020 Conversation and the TalkGreentoUs.Ca website. The Pecha Kucha event brought together 13 local change-makers to speak on the subject of Vancouver's effort to become the Greenest City in the World by 2020. It not only had the largest attendance of any city engagement event in Vancouver's history, but it also particularly brought new people and demographics into the conversation.

6. Map Your Assets – Community Asset Mapping involves informing policies and activities through the creation of a 'map' of the community's resources. The process is intended to mobilize a community to focus on what matters most by identifying and using its assets.The City of Vancouver hosted a cultural asset mapping session as part of a plan to develop a long-term vision and plan for a downtown neighbourhood called the West End. Participants were asked to map and explain the significance of cultural assets. The results from the session helped identify key cultural assets in the neighbourhood as well as ideas and opportunities to improve them.

7. Walk the Talk – The "walkshop" is more than just a neighbourhood tour—it's a moving conversation, educated and stimulated by looking around. Typically on foot or bike, walkshops allow community members and planners to better understand their neighbourhood together; to document community assets; and to showcase and discuss new and ongoing initiatives. For example, North Vancouver Mayor Darrell Mussatto recently organized a bike tour to help citizens discover the city's new bikeways, highlight cycling improvements, and future initiatives. The City of Vancouver also used walkshops frequently and successfully in the creation of the award-winning Cambie Corridor Plan. 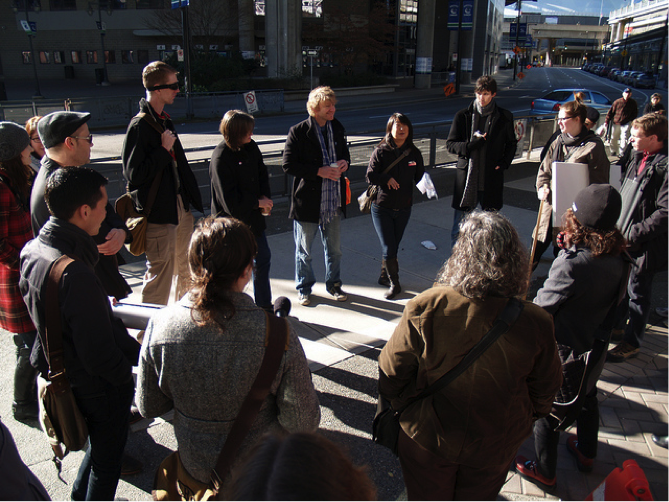 8. Open the Doors to City Hall – 'Doors Open' is a successful concept used in cities around the world, and has been growing in popularity in Canada. In each 'Doors Open' event, cities provide a behind-the-scenes look at how some of the most popular and well-known venues operate, giving people the chance to look and experience new levels of civic engagement. The City of Surrey recently held its second annual Surrey Doors Open, inviting the public to explore local attractions, venues, facilities, historic landmarks, and parks with self-guided tours and free admission. Activities included an Art Walk, fire truck tours, a Ukrainian lunch, a nature scavenger hunt, the chance to observe a Sikh wedding, and more.

9. Expand Online Consultation – Often, when city governments are consulting on a major issue, interactions are limited to a select group of vocal, often opposed citizens. In an effort to get broader involvement, Metro Vancouver cities like Vancouver, Richmond, and Surrey have launched online consultation platforms that allow citizens to sign up once, provide a bit of background about themselves, and receive regular invitations to provide opinions—online or in person—on important civic issues as they arise. In Surrey,City Speaksis an online consultation forum where community members can participate in surveys, discussions, forums, and quick polls on various topics. Surrey's goal is to reach 5,000 members by 2014.

10. Let Citizens Get Creative (i.e., Community Art Projects, Photo Contests, Design Competitions) – With photo contests, idea or design competitions and community art projects, cities encourage citizens to get creative when it comes to identifying and addressing local issues. Vancouver has held such competitions to solicit ideas for small scale projects, such as new storm-sewer manhole covers, to broader scale projects, such as alternative uses for the city's only freeway-like viaducts. In the realm of community art projects, Burnaby invited those who attended its annual Homeless Connect event, which connects people living in extreme poverty and homelessness with essential services. Homeless Connect worked with local quilters to craft a quilt that would "showcase the diversity and need of people living in extreme poverty in Burnaby." Once completed, the quilt was showcased to the public at the city's library. 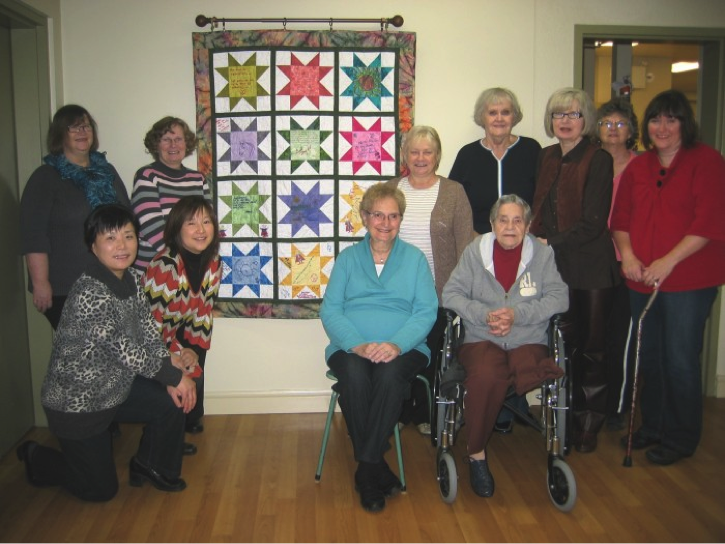 These 10 lessons are just the tip of the iceberg in our survey of new and evolving engagement practices in Metro Vancouver. Not every experiment in better engagement is going to be successful, but it's important to have an open mind for new tools and more fun! Being creative, interesting, and credible, while also good at listening, are the keys to getting everyone more excited about, and involved in, their city's future.

Brent Toderian is an international consultant on advanced urbanism with TODERIAN UrbanWORKS, Vancouver's former Director of City Planning, and the President of the Council for Canadian Urbanism. Follow him on Twitter @BrentToderian