The Coolest Green Infrastructure You Are Likely to See 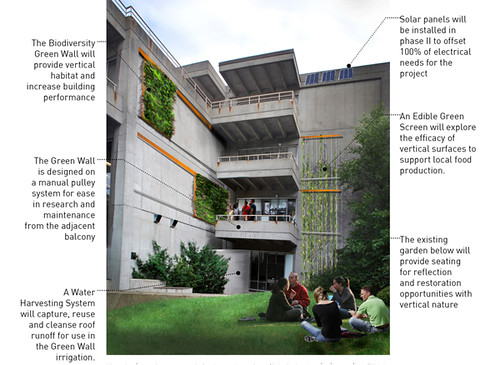 Just yesterday, I was making the case for bringing more nature into urban environments, to soften the perceived and real effects of density and thus make density more appealing.  Today, I came across maybe the best example I have seen.  It is certainly the best I have seen integrated into a vertical wall; this is key in downtown districts, where green space on the ground can be hard to come by.

The project has just been installed at the University of Washington's College of Built Environments and, with appropriate recognition of the benefits of multi-tasking by city greenery, it is called the "Biodiversity Green Wall, Edible Green Screen & Water Harvesting Demonstration Project."  Not too good for sound bites, that name, but it certainly is descriptive.  Nancy Rottle of the University's landscape architecture faculty and associated Green Futures Lab, which designed the project, says it is intended "as a billboard for new sustainable practices, and to discover to what extent green walls and screens can help promote biodiversity, produce food and reduce energy use.  By harvesting water to irrigate the green wall, the project will reduce potable consumption and may lessen stormwater impacts." 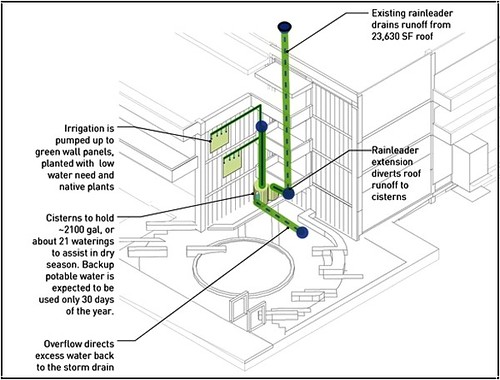 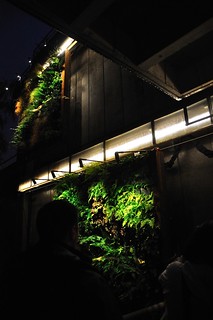 The signature feature of the biodiversity wall comprises two large screens mounted on aluminum frames fixed to the wall of their building, UW's Gould Hall.  Unlike every other green wall that I have seen, these can be moved horizontally via a pulley system operated from the building's balconies.  Peter Kelley describes their function, along with the project's edible green screen and water harvesting mechanism, on the University's website:

"The two green walls, each 10-by-10 feet, will together hold more than 500 plants, including 23 species, 70 percent native to the Pacific Northwest. SolTerra, a Pacific Northwest firm, built and will install the green wall, which is composed of permeable fabric mounted on an aluminum frame . . . Along with measuring plant growth, the Green  Futures Lab team will monitor such things as building and local air temperature impacts, biodiversity and water use in the areas affected by the walls and screen.

"The Edible Green Screen, a system of 39-foot steel cables, will actually be a giant trellis, holding hops and kiwi vines grown from the ground.  Hops were chosen because of visual appeal, fast growth and fun, Rottle said.  UW Farm, the demonstration project on sustainable urban agriculture, is interested in harvesting the kiwi, chosen for its hardiness, beauty of its vine and fruit, and appropriateness for a south wall in Seattle.

In the plans for 2013, if funds can be raised, are solar panels intended to generate enough energy to completely cover the energy requirements of the project's irrigation pump and electrical requirements.  Seven students from four different disciplines worked on the project.

This video showing and describing the project is fantastic: