Diary of an Urban Wild Garden: The Beginning

Welcome to a new column feature, the Diary of an Urban Wild Garden, where I plan to write about my wildlife garden in Seattle, the design, how it's doing, what I'm currently doing, what I see and more. It's about time I started this, as the garden is now in its third year. This first post is an overview of what the yard was like in the beginning, and what we've done so far.

Nearly three years ago we moved into our first house. Having lived in rentals and apartments, this was my first chance at putting my Landscape Architecture education into practice. It's gone surprisingly well so far! When we moved in during the fall of 2012, we had a six month old baby and this was our first house. Steep learning curves on both fronts! The backyard had almost no plants; a lone forsythia and a smattering of goldenrods against the house were the only sizable things growing.

The rest of the backyard was about 1/3 deck and the rest grass. The front yard was barely more interesting; a large maple tree in the corner, a couple of lilacs, a row of various rhododendrons and an assortment of low-growing perennials such as crocus, bluebells and a few odd tulips.

Overall, it wasn't much. On the plus side however, it a was pretty good, nearly clean slate for creating a wildlife garden. The first native plant sale I went to was shortly after we moved in and I bought several new plants to add to the few we brought with us which we had grown on the wildlife balcony at our apartment.

The first thing I planted was a Douglas Fir, a tiny thing, no more than 10? high. It was gifted to my daughter from her grandma and now it's her tree to help care for. At the same time I planted a Vine Maple (Acer circinatum), Mock Orange (Philadelphus lewisii) and an Indian Plum (Oemleria cerasiformis) along with a few other small plants likeSalal (Gaultheria shallon) and Kinnikinnick (Arctostaphylos uva-ursi).

The first fall we broke down some of our moving boxes, laid them in the back corner where we'd planted the Douglas Fir and other shrubs, and piled all the fallen maple leaves on the top. Then we let it sit all winter. It effectively killed the grass and broke down making a nice bed in the corner.

The next fall we did the same thing, dumping all of our maple leaves into the side yard. The side yard was half grass, half mulching with my one lonely Vine Maple.

The leaf mulch was so effective I didn't have to weed once that spring. Today the side yard is developing into a nice woodland garden and has two growing Vine Maples, Snowberry, Mock Orange, a variety of ferns, Western Meadowrue, Vanilla Leaf, Yellow Violet, Trillium, Wild Ginger and Wood Sorrel. 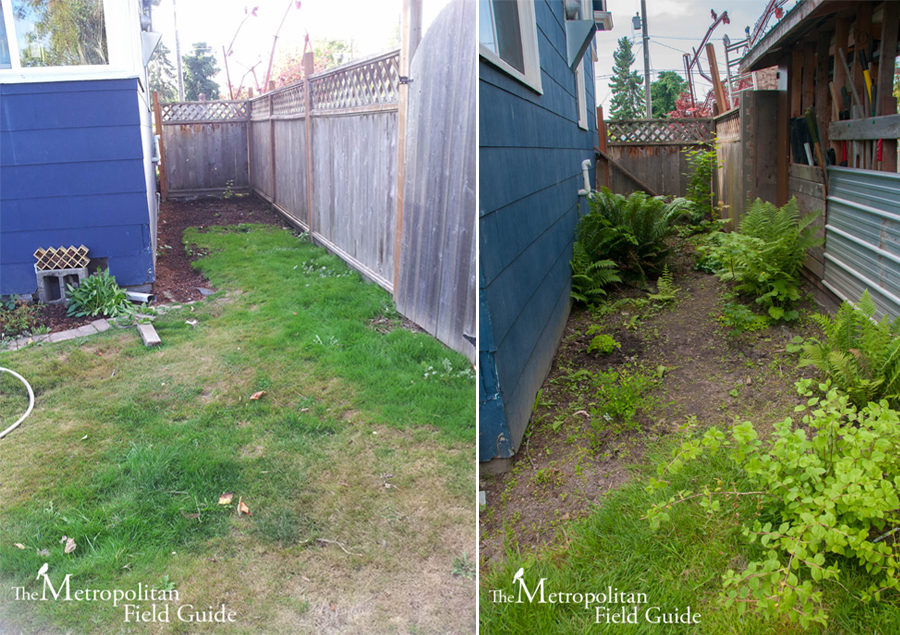 After taking so much time to type these plant names and link them, and there are still a number I've not mentioned, it strikes me what a great diversity I really do have already.  It's been challenging mentally to come from a small balcony, which was very easy to fill with plants, to a yard, which in comparison, is huge.

My thinking is generally that the plants grow too slowly and I never seem to have enough. Writing this post however, has really shown how far we've already come!

A block behind our house is a wetlands, and each spring we are treated to a frog chorus serenade. I look forward to it all year and the windows stay open all night, the whole season they are singing. Hoping to attract the local frogs, as well as dragonflies and other wildlife, we started to remove the deck to make room for a wildlife pond last fall. It's now nearly all removed and we're hoping to get the pond dug this fall.

The front yard has gotten a little less attention. Last spring I laid down some burlap sacks along the front of the house and threw out a wildflower seed mix. However, the seeds didn't have much time to come up before the tree leafed out and shaded it. A couple of poppies were all I saw. This year though, the poppies have done really well and I have a nice patch of orange which is attracting bees.

Also last spring we added a vegetable garden, working with our neighbor to flatten out the narrow space between our front walk and their driveway. I then laid down more burlap sacks and we shoveled in soil over the top. The first summer we had more zucchini than we could eat, very successful kale, lettuce and cucumbers and tomatoes coming out of our ears.

This year the vegetable garden is back, but in addition, I dug up a huge patch of grass on the other side of the front walk and seeded a wildflower meadow. Two weeks on and the seeds are already growing very well and I have visions of butterflies and bees dancing in my head. 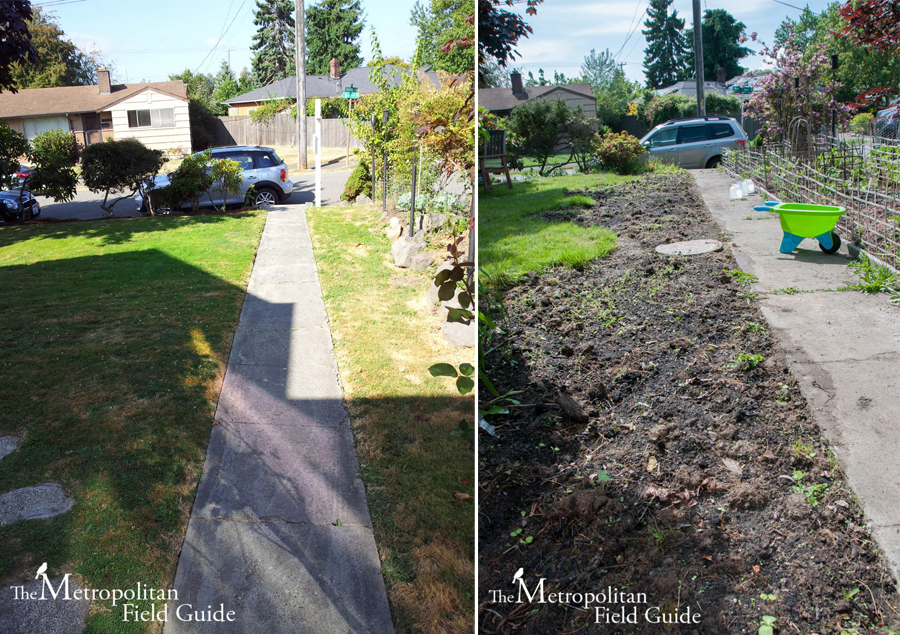 Over in the driveway, our other really sunny place in the yard, I've started to place a number of containers for herbs and strawberries. In the future it would be nice to tear up the sides of the driveway to make beds alongside it for herbs, but for now we'll have to be creative with containers. This spring I made a strawberry tower out of old fence boards and a PVC pipe down the middle for watering. It has been successful so far, in that none of the plants I put in it have died and all seem to be taking root and even growing.

Because of the chore of moving and the overwhelming time it takes to manage a very small, demanding person, I never got around to doing an overall design. My motto for the first few years has been "get it in the ground so it can grow", so plants got planted wherever the conditions were right, not necessarily in a grand design.

Over the last couple of seasons though, a plan has taken root in my mind and I'm currently working on sketching it out on paper. Once the plan is done however, a lot of work will have to take place; an entire bed will have to be dug up and transplanted to make room for a picnic table, the lawn will have to be removed, paths and other hardscaping laid and a pond dug. In between all of that I will continue to harvest and start seeds from my existing plants.

Despite not having written about the garden before, I have documented it fairly well. Future posts will discuss moths, backyard birds, specific plants, propagation of plants, insects we've found and more.

The post Diary of an Urban Wild Garden: The Beginning appeared first on The Metropolitan Field Guide.