Daniel Nairn
In recognition of the first 100 years of city planning as a profession, APA has selected 100 essential books of planning. While I think the word “essential” may be a little strong, considering that most professional planners have probably only read a handful of these, this is a nice departure point for some summer reading. Thanks to Google and the University of Michigan and Harvard libraries, we can download the ones with expired copyrights for free (beats the $$$ for some of these used on Amazon).

Ebenezer Howard would be an intriguing place to start, going back to the turn of the 19th century. Pretty much excoriated by Jane Jacobs in the 1960s as a “decentralist” utopian against real cities, he still has many defenders today. Robert Fishman attributes the more contemporary concepts of transit-oriented development and urban growth boundaries to Howard: “Calthorpe's Portland regional plan is basically Ebenezer Howard's Social City, with some new color graphics.” Peter Hall sees Howard has an anarchist, something he appreciates, and insists that contemporary planning could gain from returning to its garden city roots. Presented here are my reactions to reading Garden Cities of To-morrow for myself, and hopefully I’ll convince you to download a copy for yourself too.

The famous part of the book is the first chapter, where the plans for the Garden City are laid out, but it only makes sense in light of some more foundational principles revealed in subsequent chapters. He goes right into giving precise prescriptions for the new city, down to acreage and expenses. 6000 acres of cheap rural land are to be purchased, 1000 of which are reserved for the city. A 32,000 person population cap is set, after which a new city will have to be colonized.

As far as the design goes, Howard wants to make it as little like the overcrowded London of his day as possible, so public parks and private lawns are everywhere. The roads are incredibly wide, ranging from 120 to 420 feet for the Grand Avenue, and they are radial rather than linear. Commercial, industrial, residential, and public uses are clearly differentiated from each other spatially.

The overall goal for Howard is to combine the traditional countryside with the traditional town. For too long residents have had to make the unfulfilling choice between living in a culturally isolated rural area or giving up nature to live in a city, but "human society and the beauty of nature are meant to be enjoyed together." As he sees it, in a rather Hegelian fashion if you ask me, the two "magnets" of Town and Country that have in the past pulled people in either direction will, in the future, be synthesized into one "Town-Country magnet." Someone just needs to build the first one.

As fantastical as the first chapter hits us (or me at least, especially a "crystal palace" element), Howard is completely earnest in his attempts to get it built. In fact, most of the book can be read as a business model being pitched to potential investors. He assures interested parties that he can get them a 4.5% return. Howard makes it clear that he is not a socialist, and he does not see centralized government playing an initial role. The closest thing I can relate his plan to is a homeowners' association on steroids, he calls it a "quasi-public body," which owns all the land of the city and leases it out to residents. The financial linchpin of the plan is the fact that all of the land is purchased up front, so that the increase in property values generated by the growth will be captured by the community itself. He also assumes that if everything is planned rationally from the beginning, the costly process of retrofitting old infrastructure for new technology can be avoided.

A few philosophical commitments jumped out to me right away as integral to his whole project. First, Howard deliberately tries to steer a course been collective and individual authority, a basic paradox he sees as rooted in human nature. He suggests a pragmatic approach to sorting out where the impetus should be placed. If the municipal authorities do a good job they should keep doing it, otherwise it should be handed over to private enterprise. Ultimately, he sees these two spheres are headed in the same direction. "There is a path along which sooner or later, both the Individualist and the Socialist must inevitably travel." And it leads right to the Garden City. There's the historically progressive synthesis again.

Howard's enthusiastic embrace of progress just drips from every page. He even sees human beings becoming less selfish, as modern advances in science and technology open up frontiers of human flourishing. Newer is better, just as the railroad is better than the stagecoach. After laying out his final vision for a network of brand-new garden cities, what he calls the Social City, he briefly considers whether any of the older cities can be salvaged and readapted. Not really. After a precipitous fall in land values, due to migrants opting to move to the newer garden cities, London will have to be mostly destroyed. Only then might it be refashioned into a modern city.

This brings up what I take to be a fatal flaw in Howard's whole proposal: he has little respect for limits. It comes out loud and clear in this quote:

"Those of us who believe that there is a grand purpose behind nature cannot believe that the career of this planet is likely to be speedily cut short now that better hopes are rising in the hearts of men, and that, having learned a few of its less obscure secrets, they are finding their way, through much toil and pain, to a more noble use of its infinite treasures. The earth for all practical purposes may be regarded as abiding forever." (my italics)

This is why the loss of agricultural land to perpetual greenfield development was of no concern. Even on the little island of England, farmland seemed to go on forever. Howard wanted to use local materials to build extravagant new structures but never considered that they may simply run out. Additionally, he never considers how this build-it-from-scratch attitude matches his belief in constantly expanding technological progress. Why would the Garden City be the final stop of history? Would not it also have to be destroyed and replaced when the newer model arrives? (It actually would have within a few decades, because Howard never considered the prospect of automobiles).

I have some design quibbles too, particularly with how he envisions human traffic flowing through the city, but that wouldn't be fair because Howard was more of a social visionary than a designer or engineer. The layout he sketched was conceptual and he knew it. He also didn't understand how regional economic forces agglomerate. He assumed jobs would just follow people wherever they wanted to go. However, it's best to keep criticisms focused on the a broader philosophical level. 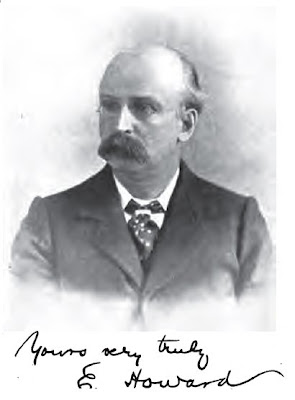 Howard's understanding of metaphysical synthesis, which is a theme throughout the work, was frankly crude. We writes:

"Town and country must be married, and out of this joyous union will spring a new hope, a new life, a new civilization."

The trouble here is that marriage is seen as an absolute collapsing of identity, when, as many married people soon discover for themselves, the two may become one but the two are also still two. Thomas Sharp, a contemporary to Howard, gives this feisty rejoinder:

"The one age-long certainty, the antithesis of town and country, is already breaking down. Two diametrically opposed, dramatically contrasting, inevitable types of beauty are being displaced by one drab, revolting neutrality. Rural influences neutralize the town. Urban influences neutralize the country. In a few years all will be neutrality. The strong, masculine vitality of the town; the softer beauty, the richness, the fruitfulness of that mother of men, the countryside, will be debased into one, sterile hermaphroditic beastliness."

The problem of "the One and the Many," a unified whole set up against diverse components, has vexed philosophers and theologians for centuries. Christian theologians, at least, gave up trying to decide whether God was one or many by around the 3rd century AD. They just let the paradox be and called him the Triune God. Howard's synthesis, on the other hand, is too neat and simple. It's all unity and little diversity - which, of course, is what Jane Jacobs stepped in to remedy several decades later.

So how am I going to leave this on a positive note? Nobody as well-respected as Ebenezer Howard could be completely off-base. There are lessons to learn from the man. He did have a good grasp on the problems associated with his rapidly industrializing England, which, by the way, seems to me a similar phenomenon to what is now occurring in the developing world. There really is a human proclivity for the "free gifts of nature," which were being pushed away and cut off by dirty factories and crowded streets of 19th century London. Even if it is impossible for humans to indwell nature as he proposes without killing it, we still yearn for the chance to visit, to remain connected.

Howard identified real social inequities arising from industrialization as many of his peers had, and he believed these could best be addressed at the local level, what he dubs a "pro-municipal" scope. Furthermore, I believe his advocacy for rational planning over the chaotic growth of piecemeal evolution has some merit in a rapidly modernizing context. Another Garden City reformer Raymond Unwin puts his finger on why this is the case, but I'll get to that in a future post.