What started as an artists sketch four decades ago has now become a working product. In 1970 artist Robert Smithson, perhaps best known for his 'Spiral Jetty' earthwork, created a sketch showing a tugboat towing a vegetated island on a river and called it "Floating Island". During his lifetime he was never able to see the idea realized, but in 2005 a team was able to create the island and it toured the shores of Manhattan. There's a great multimedia feature from the NY Times about the construction of the piece. The islands 30? by 90? surface had ten trees, several large rocks, shrubs and turf over bales of hay and soil. 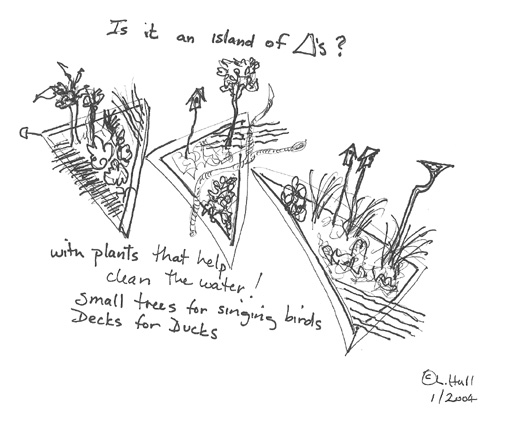 Artist Lynne Hull came up a similar idea titled 'Bird Barge' but on a smaller scale and adding a habitat element to it. Her barges are designed to be a 'floating wildlife sanctuary' by providing somewhere for birds, amphibians or even an alligator to rest. They are designed with a variety of platform materials, vegetation ranging from shrubs to small trees, bat houses and sculptures designed to provide a variety of habitat needs for various species.

Floating islands have now even been used by scientists such as was the case with an island installed in Oregon as a joint project between the U.S. Army Corps of Engineers, U.S. Geological Survey, Oregon State University, Oregon Department of Fish and Wildlife, Real Time Research and Floating Island International. They created an island for nesting Caspian Terns at Summer Lake Wildlife Refuge as an attempt to redistribute the population of the tern colony nesting at the mouth of the Columbia River because of the impact they were having on Salmon populations. At Summer Lake they built two half acre floating islands constructed of recycled materials, "each of the 328 modules that comprise the island consisted of 200 lbs of polypropylene from recycled carpet and 125 lbs of polyester from recycled drinking bottles."

Because the Terns prefer to nest on the ground, the islands were covered with a gravel substrate with large rocks for swimming birds to get onto the island. The project proved successful with terns nesting on the island in the first year and successfully rearing chicks.

Anaheim had similar success with their own floating island for Least Terns in a water storage basin next to the Santa Ana River. Not only the Least Terns are nesting, the island also has nesting Forster's Terns, American Avocets, Black Skimmers and Geese.

Floating Island International is the company that built the islands for the Summer Lake project above and they have provided islands for a multitude of other applications including use in zoos and water treatment plants. While the company was started as a way to improve water quality, they do address habitat on their website and list some of the possibilities of it's use such as for loon nesting.

One of the few examples of a small scale island I've seen was in the Wildlife Garden at the Natural History Museum in London. They had a number of different sizes and shapes, some with houses, others just with vegetation.

Unfortunately there's not a lot of evidence that floating islands have been used to any extent for wildlife yet. The application for floating islands could have a huge range from small, local ponds to creeks, lakes and even large rivers. With so many of the rivers that run through cities lacking a natural bank, floating islands could provide a refuge for a variety of wildlife species from birds to dragonflies to turtles. In small ponds they could help with species at risk such as the Western Pond Turtle, by giving them somewhere to nest away from predators. In urban areas floating islands could give nesting and rest refuge to species away from domestic cats and even humans. Hopefully this is an idea that will catch on.

It's Not Easy Making Art That Floats:: The NY Times