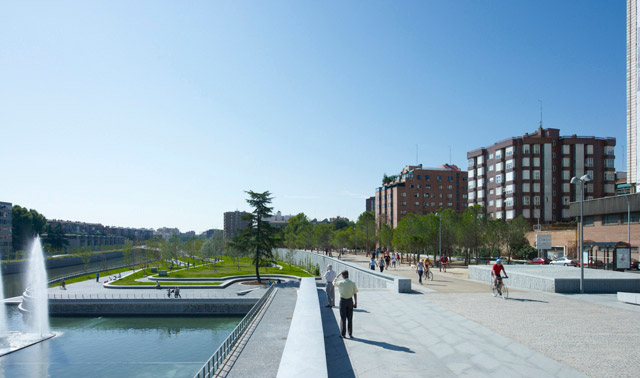 After eight years of delays, traffic jams, noise and dust the last section of Madrid Rio — a combined infrastructure and public space project — was finally opened to the public on April 15. In the 1970's Madrid was cut off from the (already forgotten) Manzanares river by the construction of the M30 ring motorway. Although this separation of city and waterfront was a common phenomenon in many cities around the world in the mid-20th century, Madrid's "waterfront" went through the middle of the city, not at the edge; Madrid lost not only its river — it was cut in two. Neighborhoods once just over the river were instantly relegated to the periphery. 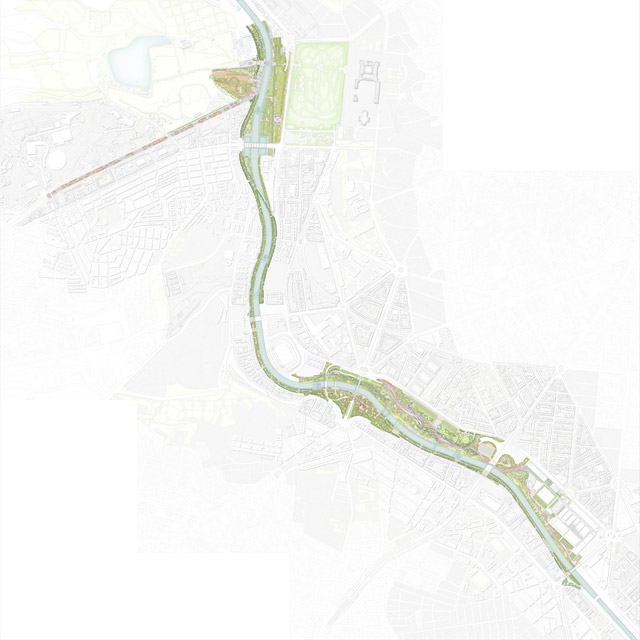 The Madrid Rio project, a six-kilometer linear park spanning the a sunken motorway is the finalization of a plan hatched a decade ago to reconnect the city center and adjacent neighborhoods to the river. 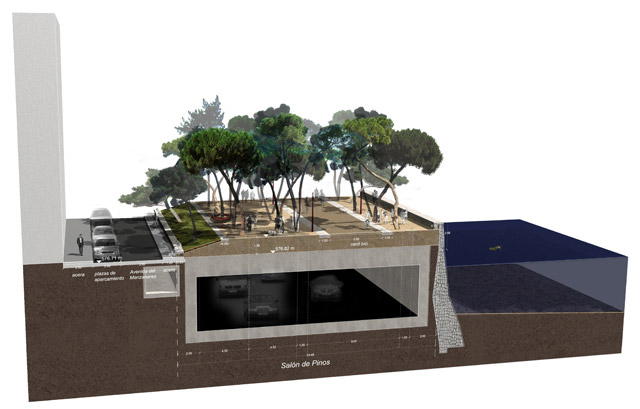 This large infrastructure project is one of many initiated by Alberto Ruiz-Gallardon, Madrid's ambitious mayor. Gallardon came to power with a vision of reinventing Madrid by turning it into a global city. Following the Barcelona example, he became obsessed with winning the 2012 Olympics bid. When he lost to London, he tried again for the 2016 games. The river project, along with an airport expansion, new sports arenas, and underground parking lots, were part of this strategy. Many people — locally and abroad — simply began referring to the mayor as "The Pharaoh". He seems to have deserved his nickname — since he came into power 2003 Gallardon started more than 70 major construction projects. Poorly managed (the Madrid Rio was delayed and for twice what it was supposed to cost), overly ambitious, and spanning Spain's recent boom/bust, the projects helped contribute to Madrid's debt — the largest in Spain — and leading the city into bankruptcy. After enduring living in the largest construction site in Europe, Madrid resident will now have to pay for all the projects with increasing taxes for the next few decades.

In times of economic hardship, large infrastructural projects are usually welcomed for creating jobs and building public assets. The works of the WPA in the USA during the great depression are often referenced in this way. Certainly the Madrid Rio, seen alone, is a valuable addition to the city that has done much to correct decades of neglect and bad planning. But in Madrid, these projects were undertaken not in a crisis, but in the heat of a speculative boom. In all this excitement, and with seemingly overflowing municipal coffers, urban renewal was not undertaken in an incremental way — it was an attempt at instant transformation. What's more, the rush seemed too political, a kind of legacy-making that was more pharaonic than benevolent.