The Origin of Permaculture in Cuba

the polis blog @thepolisblog
This post is a continaution of a previous one on permaculture and also of Melissa's last post on urban agriculture in Rosario, Argentina. In the past months I've had the chance to work with permaculture experts from Cuba's Antonio Núñez Jiménez Foundation for Nature and Humanity. This experience has helped understand ecological urbanism as a feasible and necessary option in the face of the unsustainable urbanism that is overwhelmingly dominant in almost every corner of the world. This time I will explain, similarly to Rosario's case, how urban agriculture and permaculture in Cuba became so important as a result of economic crises.

In the early 1990's, Cuba entered into a severe crisis due to the collapse of the Soviet Union and its associated economies in Easter Europe. These countries supported around 80% of Cuba's economy, which was based on intensive single-crop agruculture and was highly dependant on imports of agricultural subproducts, such as fertilizers. Cuba also had to import most of its food from other countries. The Soviet Union had been paying much higher prices for sugar than the price in the capitalist international market. In a very short period Cuba's agricultural system collapsed, posing a serious threat to something that had been taken for granted: food. 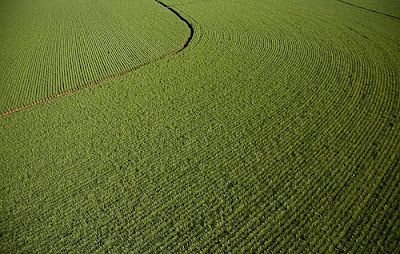 In the 1980's, anticipating the unsustainability of an economy that was highly dependant on a few agricultural products, Cuba's government and agriculture-related professionals had been developing alternative technologies and processes for agriculture. Then the crisis arrived and they were relatively prepared, but the crisis was tougher than anyone could expect. The response from the government moved along basic survival strategies from urban communities. Agriculture, in a few years, moved from large export-oriented, chemical dependant monoculture to small-size, urban-based organic food production. Having an orchard at home or in an empty plot in the neighbourhood became the norm. Most of these drastic changes were supported by the government, and soon urban agriculture became national policy. Today, urban agriculture in Cuba produces 70% of the country's food needs. 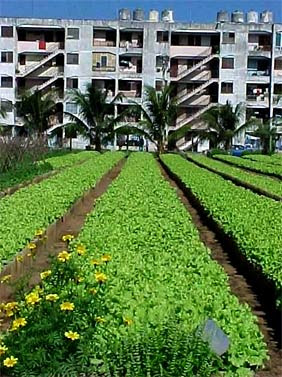 The institutionalization of urban agriculture led to its integration in urban planning and its different systems, notably water, solid and liquid residues and energy, including transport. In many instances this integration had Nature's cycles as their main reference, which is the principle of permaculture: an intelligently designed human settlement can be self sufficient in terms of food, water and energy.
It has been repeatedly said that a crisis should be understood as an opportunity to change to more sensible and intelligent ways to live and develop. However, as Mike Davis masterly points out, the reaction from most governments has been the opposite.
In the case of Ecuador, single-crop farming dominates its economy (together with petrol). Moreover, according to Ecuador's Ministry of Environment, intensive export-oriented agriculture is the main source of the country's CO2 emissions. This is the case of many other countries that have an economy that is highly dependent on few cash-crops and that is in the hands of few landowners. This is, as was the case of Cuba and Argentina, a highly risky situation, not only in terms of jobs and economic stability, but also in terms of food. Hunger, as tough as it sounds, might be closer than it seems for many millions of families. The question is, should we wait until large proportions of the population go hungry and/or are hardly hit by unpredictable extreme climate events before we adopt permaculture?