The Pruitt-Igoe Myth of Public Housing

The Pruitt-Igoe housing complex in St. Louis, USA has long served as an archetype for the failure of public housing and oftentimes for well-intentioned government policies in general. The Pruitt-Igoe Myth (2011), a documentary feature by Chad Freidrichs, attempts to systematically dispel this notion by bringing to light the often omitted explanatory factors at play in the decline of Pruitt-Igoe.

The Pruitt-Igoe housing project was a complex of 33 high rise buildings built by the St. Louis Housing Authority in the North side of the St. Louis, Missouri, USA. In the mid-1950s, it represented a dramatic shift from the squalid tenements that low-income residents in urban areas were used to. It was advertised as a place where people could live with indoor plumbing, electric lights, plastered walls, and other conveniences that were expected in the 20th century. Moreover, it was touted as a solution to bring the city's slum-dwelling urban residents out of poverty and ultimately to put St. Louis on the path of prosperity. On one hand, the intent of Pruitt-Igoe was sound in addressing the post-war migration of Southern farmers who were forced to move into unsafe and unsanitary slums of the inner city to remain close to their places of work. On the other hand, it was the result of politicians and the elite bent on a post-war revival of St. Louis by eradicating slums from the centre of the city. 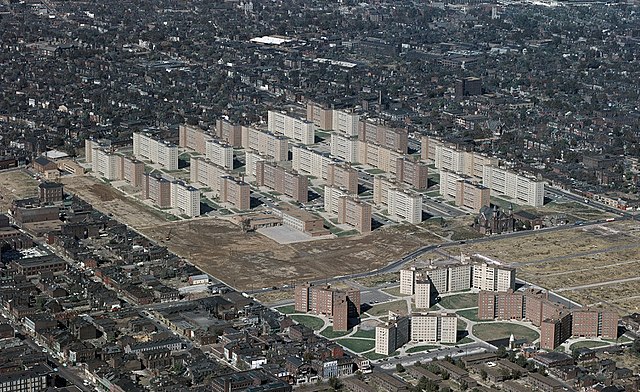 The 33 rectangular buildings that made up Pruitt-Igoe; Image Source: US Geological Survey

Pruitt-Igoe saw initial success and seemed to fulfil its original intent. Many residents who first moved into Pruitt-Igoe thought of it as a resort with all its facilities - people who had hardly seen the sun before could now have better views than the richest people in St. Louis in their high rise apartments and "poor man's penthouses". Residents were pleased to have beds and rooms to themselves while living in a lively and social environment. The complex was well maintained with handymen regularly sweeping the hallways and the elevator kept clean and functioning.

However, the city of St. Louis soon realised that where it had thought it had solved its problem of low-income housing, a monster was created. The Pruitt-Igoe housing complex over time became poor, increasingly segregated, heavily vandalised, and began to resemble the slums it had once replaced. It gained the notoriety of a battleground with crime and neglect seating fear in its occupants. It became a textbook example of a federal housing project as a centre of crime and violence, doomed to failure since its inception.

One of the most common criticisms of Pruitt-Igoe was its architect Minoru Yamasaki, who went on to design the World Trade Centre in Manhattan, New York. To many, the implosion of Pruitt-Igoe symbolised the death of Modernist architecture which they argued would inevitably become the breeding ground of isolation, vandalism, and crime. Others criticised the welfare state and argued against "big government" as the problem and Pruitt-Igoe as its result. Bankers and realtors labelled it un-American, Communist, and as an erosion of the free market. Some even pointed fingers at the residents as too poor, too uneducated or rural such that they brought down Pruitt-Igoe with their own problems.

However, not much was said about the laws that failed to maintain Pruitt Igoe, the economy that deserted it, the segregation that stripped away opportunity, and the radically changing city in which it stood.

The post-war era saw rapidly changing demographic patterns in American cities all over as a result of two opposing forces. On one hand, rural migration caused an upward growth in the population of the city, while on the other hand, a large number of people who had the means of leaving it, fled to the suburbs, a phenomenon often dubbed "white flight". The landmark Housing Act of 1949 that sanctioned federal money for housing projects such as Pruitt-Igoe at the same time fuelled suburbanisation and home ownership through affordable credit and easy mortgage facilities.

By 1980, St. Louis lost about half of its mid-century population; other rust-belt cities like Cleveland and Detroit met with the same fate. The loss of the middle-class, the loss of an industrial base, and the loss of tax base led to the deterioration of basic services in cities. The film argues that planners mistook recognising the dominant trend of post-war suburbanisation, when the new American dream was being built on cheap lots on the peripheries of cities with well-planned homes, gardens, and drive-ways. Dozens of tiny suburban townships were formed, determined to maintain their independence. But public housing in St. Louis was set up as a system that depended on an overcrowding crisis. Once people started moving out, the project couldn't raise enough money from the dwindling tenants even after additional grants were given and studies commissioned to inquire about the causes of decline.

While the federal government paid for building a complex structure, it failed to effectively take into account the ongoing costs of maintenance. The revenue model was based on rent, which the dwindling residents could not afford in order to hire skilled handymen to maintain their buildings. By the end of the 1960s, rents were increased three times in one year stretching low-income residents thin. Some residents paid up to three-quarters of their income to live in Pruitt-Igoe. This resulted in rent strikes and nine months of negotiation after which the Housing Authority finally gave in and restricted rents to a quarter of the residents' income. This victory, however, was short lived as years of neglect placed buildings on the verge of physical collapse. In the winter of 1970, water lines and sewage lines broke, flooding the complex with ice while residents' heating facilities lay broken – this dealt a final blow to Pruitt-Igoe.

The Welfare Department imposed and enforced stringent restrictions. Most notably, residents were not allowed to have able-bodied men in their house if a woman was receiving help for her dependent children, leaving many women and children without husbands and fathers. Furthermore, residents were not allowed to keep telephones or televisions in their apartments. Such stipulations made residents feel that were being strategically isolated and restricted almost to an inhumane extent, as if the price of receiving welfare was to live by punitive rules.

Urban historian Joseph Heathcott claims that public housing in St. Louis was always used as a tool for segregation and that St. Louis did everything in its power to prevent "negro deconcentration" i.e. African Americans moving out of particular neighbourhoods. Every project was imagined as a white or black project and was placed on the map in ways that deepened the pockets of segregation in one place or the other, radically creating racial distinctions in a way that no other form of legislation was able to do.

Moreover, ill-enforced rules and poor maintenance stigmatised Pruitt-Igoe's residents to be associated with drug abuse, crime, and black poverty. In a resultant backlash, residents saw law enforcement and medical assistance as the enemy, oftentimes raining down bricks and fire bombs on them, so much that police officers and firemen refused to serve the complex.

By the mid-60s, Pruitt-Igoe was falling apart with rampant vandalism, crime, and a growing number of vacancies in an increasingly poor and emptying city. Lack of enforcement resulted in vacant apartments to become havens of guns and drugs forcing the last few residents to move out. In 1972, three of the buildings of the complex were imploded with dynamite, the first of which was nationally televised. Two years later, the St. Louis Housing Authority received federal orders to completely demolish the rest of the complex. By 1976, the site was clear with the complex razed to the ground and residents scattered across the emptying city.

Footage of the towers being razed to the ground in 1972 became symbolic of the failure of federally funded housing as a concept; Image Source: Pruitt-Igoe Myth press material

The demise of Pruitt-Igoe is attributable to many confounding factors rather than to the failure of public housing per se. However, there is not much compelling evidence of success even in other parts of the world. Singapore remains an outlier with about 85% of its population living in public housing, arguably because of its unique economic, demographic, and political characteristics. The Indian context is particularly problematic for public housing and other supply-side solutions for affordable housing given the diversity of its population and the requisite scale. Governments across the world are moving towards more market-based approaches to house their middle and low-income populations in the form of demand-side interventions and PPP solutions. India, however, continues to pose a challenge with its regulatory bottlenecks and distorted markets.