Reviving the post-industrial city without destroying it 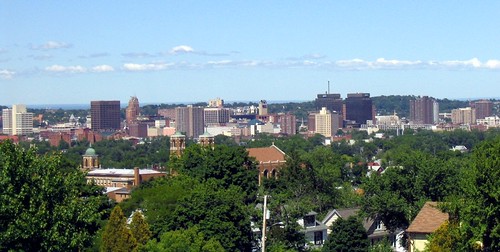 Syracuse, New York in many ways resembles a typical once-industrial city that is past its prime.  But is it, really?  A superficial reading of the trends might lead one to say yes, it's "shrinking":  the city's population, which stood at 221,000 in 1950, has now declined to 147,000, a loss of 34 percent.  That sounds serious, but during roughly the same period Washington, DC, where I live, lost over 200,000 people, a decline of 30%.  Now, DC's population is starting to grow again, and no one would call it a "shrinking city."

The truth is that central cities all over America suffered significant losses from the 1950s forward, due to racially-tinged "white flight," increasing crime, declining school quality, increased mobility, and a self-perpetuating cycle of disinvestment.  This did result in abandoned properties in many cities, including Syracuse: 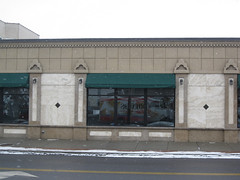 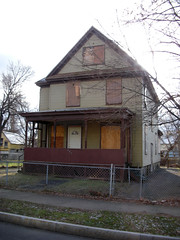 I'll concede that the prospects for and pace of recovery vary from one place to another, in significant part due to economic factors.  But in the majority of cases most of the flight was simply to the cities' suburbs.  Syracuse lost population only when one looks at the artificial political boundary of the central city.  Its Wikipedia entry reports that, "although city population has declined since 1950, the Syracuse metropolitan area population has remained fairly stable, even growing by 2.5 percent since 1970."  That's a much slower growth rate than, say, metro Washington's, but the point is that what really happened in Syracuse was not a decline but a hollowing out, accompanied by suburban sprawl.

The distinction makes a difference, because if a region is sprawling while stable or growing in population, our response to losses in the central city should be different than if the whole region is in irreversible decline.  There may be a stronger argument for giving up on abandoned properties and neighborhoods in the latter case (if not as strong as some argue) than in the former.  But, where a region is still sprawling, the proper response in my opinion is to apply measures to stem the sprawl while simultaneously taking advantage of the availability of urban property for smart revitalization in the core.  This is especially the case given that all the market and demographic signs point to more demand for an urban lifestyle; the 21st century paradigm is likely to be a revival of central cities accompanied by a suburban decline (if there is any decline in a region) rather than what we experienced in the latter part of the 20th century. 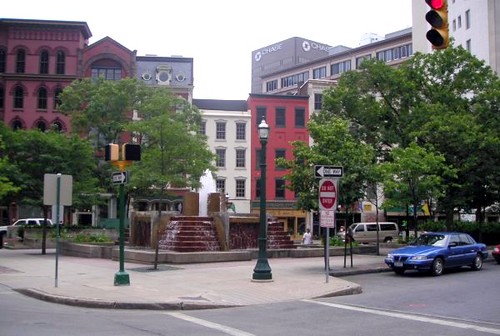 A group of far-sighted leaders in Syracuse gets this, writes Roberta Brandes Gratz on CitiWire, and they are taking steps to regenerate their city.  Brandes Gratz especially cites Mayor Stephanie Miner, Syracuse University Chancellor Nancy Cantor, and Onondaga County Executive Joanie Mahoney.  Instead of tearing old neighborhoods down, as is happening in some other cities, they are restoring and building.  Brandes Gratz quotes Mayor Miner:

"We live with decades of bad decisions to tear down too much of our city," says Mayor Miner. "I drive by some of those mistakes every day. The easy route might be to tear down more but, then you have to ask, where is our soul, who are we?"

The biggest challenge, she says, is overcoming the state and federal regulations that make this revitalization direction so difficult. "We lobbied hard for the state tax credit for historic building restorations and we have to work equally hard to overcome all sorts of regulations to make things more flexible."

"Downtown vibrancy is real and spreading, even though the scars of excessive demolition of the 1950s and '60s remain.  Armory Square, a six-block area of railroad era warehouses and small hotels that have been gradually renovated since the 1980s, 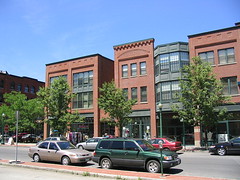 is overflowing with restaurants, cafes, local stores, offices and assorted businesses.  [See photo, right.]  More recently the spectacular Thomas Lamb 1920s Landmark Theater was restored. A former Day Brothers Department store has been converted to apartments, adding to the growing downtown population. And the redevelopment of the Pike Block, a multi-building mix of housing and retail, creates a link to Armory Square and expands the revived downtown district. A new seven-story infill building is rising on a former surface parking lot to which a suburban engineering firm is relocating.

"Most recently, County Executive Mahoney announced her support for the restoration of the historic 1924 Hotel Syracuse, conveniently close to the convention center.  The three-tower brick and sandstone landmark [see photos below] has been bankrupt and shuttered since the 1990s.  Mahoney chose to support this investment of county, state and city funding over a proposed new Westin Hotel.  The combination of grants and low cost financing is partially subsidized with federal Recovery Zone Bonds."

Brandes Gratz's encouraging story also cites some terrific work by Syracuse University administrators, students, and faculty to collaborate with residents of disinvested neighborhoods to reclaim vacant buildings and lots for restoration and development of homes and commercial properties.  Beyond the university efforts, community residents in other parts of the city are successfully opposing demolitions, getting the attention of absentee landlords, and earning planning victories for walkable street design rather than suburban-style parking lots for retail. 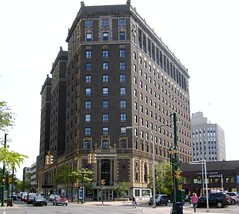 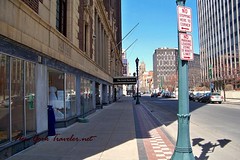 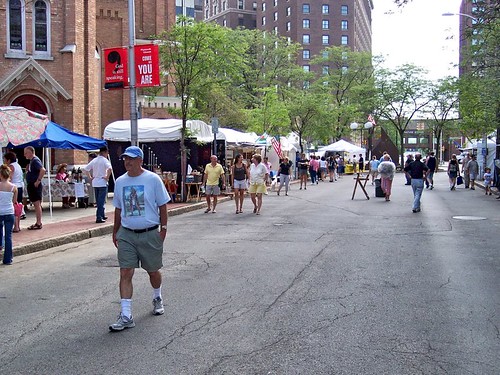 Syracuse has assets to rebuild upon, including of course the University, along with several large medical facilities and excellent cultural and performing arts institutions.  Wikipedia reports that the area "has few extremely large employers, but rather many smaller ones, which provides for a certain amount of stability.  Additionally, eight of the area's top eleven employers are in education or the service industry, which tend to be much more stable than the manufacturing industry" that dominated the region's past.  Its unemployment rate in the last decade was roughly equivalent to that for the nation as a whole.  Earlier this year, Forbes magazine cited Syracuse as "one of America's best places to raise a family," specifically ranking it fourth among the ten best.

Brandes Gratz's entire article is well worth the read, and I couldn't agree more with its conclusion that this sort of activity is a far preferable alternative to demolition of once-historic city neighborhoods (not to mention initiatives in some cases to convert them to semi-rural fields).  Yes, regeneration is hard work, requiring difficult capital assembly, regulatory maneuvering, and a ridiculous amount of patience.  But this will be an urban century, and the places that position themselves to welcome more urbanism, not less, will be the beneficiaries.