"Big infrastructure", in particular freeways and major roads interchanges, are a part our cities whether we like it or not. While largely inherited from the "freeway rush" of the 50?s and 60?s, some of these pieces of the urban puzzle are necessary (and many unnecessary).  Demolition may also not also not be an option. But where these pieces of infrastructure do impact on public life, it is often in a negative manner, characterised by dark, unsafe, barrier-filled, unwelcoming spaces, which with some thought could engage more constructively and positively with public life.  Many cities have been realising them. Here are great projects and ideas from cities around the world, which have embedded everyday life (and communities) into "big infrastructure", making them not only more welcoming and safe, but in some cases bringing economic benefit too.

"The Phoenix Flowers" by 7N Architects and RankinFraser Landscape Architecture for the Glasgow Canal Regeneration Partnership (GCRP), is the 1st phase of the regeneration of the Speirs Locks area in Glasgow, a new public realm intervention which re-connects North Glasgow back to the city centre for pedestrians and cyclists. The project has involved the radical revitalisation of this crucial link between the canal network and Glasgow's City Centre which was severed by the construction of the M8 motorway in the 1960s. At the 18th Street underpass in downtown Birmingham, Alabama, American artist Bill FitzGibbons has brought light and colour using a computerized LED light system. The Art Deco architectural details are accentuated but more importantly, it improves the connection between two major areas of the city, the Parks District and the city center. The LED network is made up of 250 units, all linked to a computerized system that allows Fitzgibbons to program 16 million different colors and frequencies. Specific programs can be scheduled for specific times, allowing Fitzgibbons to control the mood of the tunnel through color and movement. In the early seventies a new Freeway was constructed in Koog aan de Zaan and produced a brutal cut in the urban tissue. The project is an attempt to restore the connection between both sides of town and to activate the space under the road, after being largely ignore for 3 decades. The wishes and suggestions of the community were collected and formalised in a document titled A8ernA. The locals –including residents, youth and retailers- came up with numerous proposals that were used as the starting point for the renewal which now incldudes a supermarket, a florist, fish shop, parking spaces for 120 cars, a skatepark, graffiti gallery and more.

The East River Waterfront Plan in New York has helped transform large parts of this interesting waterfront space into a pedestrian and cyclist friendly area along with mulltiple uses and activities includThe complex site sits partially beneath the elevated FDR highway and partially over water on marine platform structure.  The goal of the project is to provide continuous public esplanade for bicycles and pedestrians, improve connections to the adjoining neighborhoods and provide needed open space amenities.  The project design is conceived as an adaptive "kit-of-parts" for the primary site elements of paving, planters, railings and furnishings. (Source: Ken Smith at Behance)

How about a skatepark? Read more about the idea here 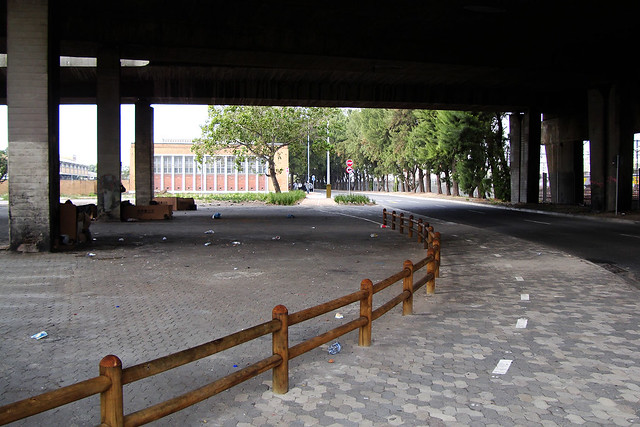 Entering the city from Culemborg. Source: Warrenski at flickr.com